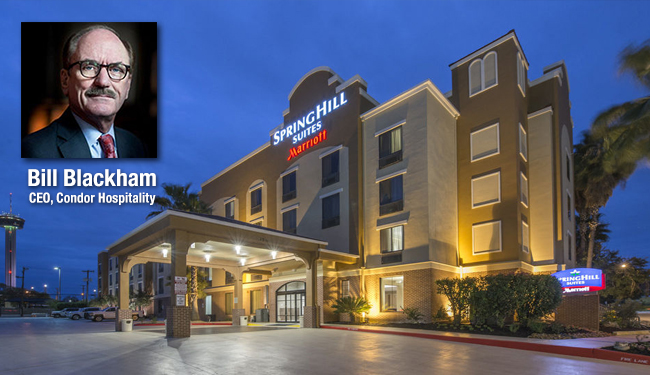 “We are undergoing a comprehensive change in every aspect of the company,” said Bill Blackham, CEO of Condor, in an interview with REIT.com.

Blackham has led Condor since March 2015. In an effort to signal the move away from the economy hotel market, the company changed its name from Supertel Hospitality in July 2015.

Supertel, a NASDAQ-listed REIT since 1994, suffered from a “problematic” capital structure, according to Blackham: It operated with about 10 times the amount of preferred stock to common stock  and “had lost relevancy” in the marketplace.  In fact, Supertel’s auditors at KPMG expressed concerns in their audit opinion in 2014 that the company could continue as a going concern because of significant debt coming due in 2015.

In response, Blackham mapped out a comprehensive plan for repositioning the company that involved refinancing the firm’s debt load and setting the stage for reducing the amount of preferred stock. By extending debt maturities, Condor eliminated the going-concern qualification last year.

Meanwhile, a $30 million investment earlier this year from institutional investor StepStone Real Estate, an affiliate of StepStone Group,  enabled Condor to create a single class of preferred stock for which the company can require conversion to common stock in the event of a qualifying equity raise.

“We’ve positioned the capital structure of the company such that it will have a 10- to 15-fold increase in outstanding shares upon the conversion of preferred stock,” Blackham said.

“We have a much higher-quality balance sheet as a result of the 2015 debt refinancings and the recently closed equity offer,” he added.

“When the dust clears, we expect to have 10 indefinite-hold hotels and none of the legacy hotels,” Blackham said. He noted that conditions for selling legacy assets have been favorable. The company started 2015 with 59 legacy hotels and sold 17 during the course of that year. Through May 31, Condor has closed the sale of 10 hotels, with an additional six properties under contract.  The company expects to sell at least 20 legacy hotels in 2016 and reinvest the proceeds into hotels fitting its new investment strategy.

“There is still a vibrant marketplace to buy the hotels we are selling. The pricing is relatively attractive,” he noted.

Condor is looking to acquire hotels in the nation’s top 100 metropolitan statistical areas (MSAs), with the greatest concentration expected to be between MSA ranked 20 and MSA ranked 60. The age of the hotel is also important. Unless it has undergone significant renovations in the last three years, Condor favors buying assets that are no more than 10 years old.

Blackham stresses that as hotel brands continue to evolve, the demands on properties to be upgraded both in terms of structure and services  have increased. Buying an older property could mean either considerable capital expenditure or the risk of being rejected by the hotel brand in favor of a newer addition, according to Blackham.

In terms of specific brands, Condor is eyeing select service, limited service and extended stay hotels that operate under the Marriott, Hilton, IHG, Hyatt, Starwood and Choice brand names. Blackham pointed out that as many other public REITs are currently net sellers of hotels, “the timing seems to be quite good” for Condor to expand.

Most recently, the company bought three premium-branded hotels for a total of $42.5 million in San Antonio, Texas; Atlanta (College Park); and Jacksonville, Florida. All of the hotels are located in cities ranked in the top 40 MSAs.  Peachtree Hospitality Management brought the hotels to Condor’s attention as part of Condor’s initiative to align with hotel management companies to identify prospective hotel acquisitions. “It works extremely well as a feeder mechanism,” Blackham said. He added that about nine management companies are currently presenting Condor with transaction opportunities.

As Blackham assesses potential acquisitions, he is watching the reinvention of hotel brands closely.  Some brands are starting to look dated, he believes, and they have not kept up with the “dramatically different preferences” of millennials.

“In order to keep their brands’ relevancy, there are significant  changes that are going to take place, and that may or may not be favorable to the owners of the hotels,” he said.