REIT Total Returns by Property Type: The Value of Exposure to All Sectors of the Real Estate Market

Recently I published a market commentary focused on differences in beta—a measure of diversification relative to the broad stock market—across property-type sectors of the U.S. REIT market . Beta measures the extent to which returns for a given asset move more or less severely than returns for a benchmark (in this case the Russell 3000 index). In this commentary I thought I would continue developing an understanding of the investment performance of different sectors of the REIT market by focusing on total returns. It should come as no surprise that the top-performing sector of the REIT market varies through time, suggesting that most investors will want to maintain exposure to every part of the real estate asset class. 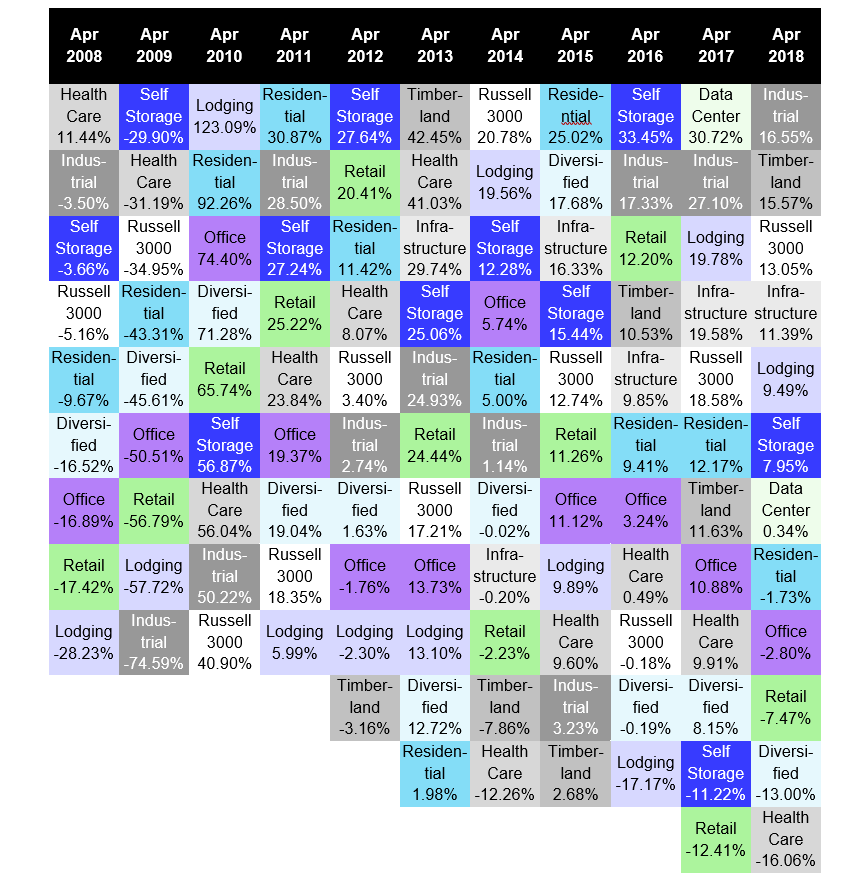 The segment of the REIT market whose returns most closely matched the broad stock market over this period has been Lodging REITs, whose returns differed in sign from those of the Russell 3000 only during the period ending April 2012 when both were close to zero. In contrast, returns for Retail REITs have differed sharply from stock market returns in several years, most notably the three most recent periods—those ending in April 2018 and April 2017, both of which were disappointing for Retail REITs, as well as the period ending in April 2016, which was strong for Retail REITs but disappointing for the broad stock market.

The chart also suggests a mean reversion tendency that investors may be able to exploit. For example, the Self Storage sector was consistently among the strongest segments of the REIT market until the 12-month period ending April 2017, when they were one of just two sectors with negative returns; following that disappointment, however, Self Storage quickly returned to positive returns in the past year. Similarly, the Residential and Health Care sectors were most commonly among the strongest segments until the past few years, and Data Centers were the top performer during the 12 months ending April 2017 before barely gaining during the most recent 12 months. Conversely, Lodging REITs were among the weakest segments of the REIT market during the early part of this period (except for the recovery year ending April 2010) until outperforming most of the REIT market during the past two years.

Investors can take advantage of the differences among REIT sectors in two ways. First, those investors who want beta exposure to the broad U.S. real estate asset class will benefit from the diversification opportunities within it: given the return gaps among different sectors, investors with exposure to all of them can generally expect to receive the strong long-term average returns of the REIT market as a whole while seeing year-to-year returns smoother than those of any individual segment. Second, those investors who want to benefit from their deeper understanding of the return drivers among different segments of the market will benefit from the opportunities to select a sector likely to outperform during each year.