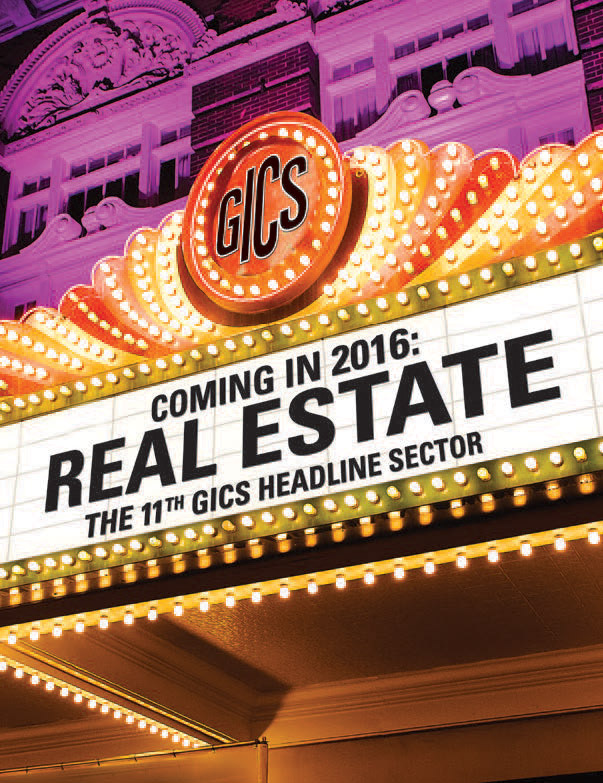 S&P Dow Jones Indices and MSCI Inc. announced in November that they plan to move stock exchange-listed Equity REITs and other listed real estate companies from the Financials Sector into a new 11th headline Real Estate Sector within the Global Industry Classification Standard (GICS). The move marks a major step in the growth and recognition of REIT-based real estate investment, according to industry observers.

GICS is the leading global listed equity classification system and is maintained by S&P Dow Jones Indices and MSCI Inc. Upon implementation, the current REITs Industry within the Financials Sector will be renamed the Equity REITs Industry within the new Real Estate Sector. Mortgage REITs will remain classified in the Financials Sector. In announcing the change, the index providers said the creation of a new headline sector, which is proposed to occur after the market closes on Aug. 31, 2016, resulted from an annual review of the GICS structure. (S&P Dow Jones and MSCI are requesting feedback on the proposed implementation date by Feb. 13, 2015, with a final decision to be announced by March 13, 2015.)

Michael Grupe, executive vice president for research and investor outreach at NAREIT, describes the change as “another important and warranted event in the long-term growth and development of stock exchange-listed REITs and real estate companies.” He notes that the classification structure of GICS frames much of the product development, investment research, media coverage, and investment strategies of both institutional and individual investors.

Mike Kirby, chairman and director of research at Green Street Advisors, points out that the commercial real estate sector hasn’t had its own Sector classification in the past because it had been difficult for investors to access the sector through listed securities prior to the Modern REIT Era.

“The success and growth of the U.S. listed REIT market has changed that, and classification of real estate as a sector in GICS is a welcome validation of the fact that any diversified investment portfolio needs significant exposure to REITs,” he said.

The sector classification provides “yet one more rebuttal to anyone treating REITs differently than other equities. So this change should, at the margin, make them more attractive to the generalist community,” Kirby adds.

Michael Bilerman, managing director at Citi Research, notes that by making real estate a standalone sector, it will “take the stage as a more pronounced asset allocation, demanding more attention from institutional investors, particularly managers who want to remain market-neutral.”

Haendel St. Juste, an executive director at Morgan Stanley, agrees.  While there may be some short-term volatility as a result of the reclassification, “the GICS changes are a positive for REITs in the long-run, with the creation of a stand-alone sector drawing more investor attention to the REIT space.”

Which REITs stand to gain the most from the decision by S&P and MSCI? According to St. Juste, larger REITs will likely benefit initially after the GICS changes are made; they are likely to make up more of the index. Mid-size REITs will benefit over time as a result of increased liquidity and a wider investor base, he adds.

First Sector to be Added to GICS

The decision by S&P and MSCI came after comments submitted by NAREIT and others in response to a consultation published earlier in the year requesting comment regarding a number of proposed changes to GICS, including making real estate its own headline Sector. Additionally, a NAREIT delegation led by Equity Group Investments Chairman Sam Zell met with David Blitzer, managing director and chairman of the Index Committee with S&P Dow Jones Indices, and others at S&P to discuss the proposed elevation of real estate to a headline sector. The NAREIT delegation included Grupe, APG Asset Management Managing Director Mary Hogan, Equity Residential (NYSE: EQR) President and CEO and current NAREIT Chair David Neithercut, and NAREIT President and CEO Steven Wechsler. 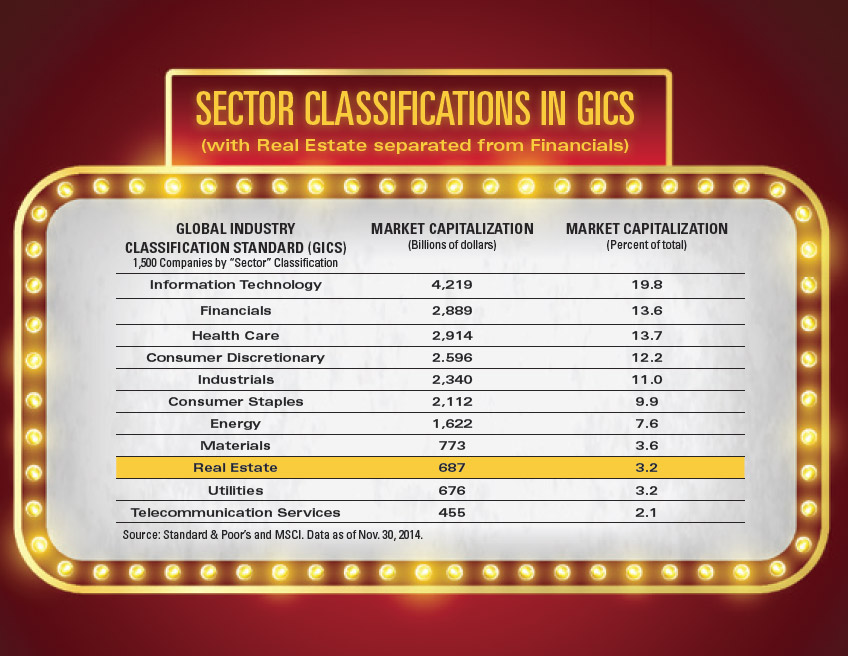 Blitzer notes that the change is significant for GICS because it marks the first time a sector has been added to the classification system since its creation in 1999. Discussions about adding a separate Real Estate Sector have occurred for a number of years, Blitzer said. In fact, ever since Australia created a separate Real Estate Sector when its own GICS was established in 2001, “it’s always been in the back of everybody’s mind that maybe it should be true elsewhere too,” he added.

The response to the proposed change has generally been positive, according to Blitzer. In discussions with clients and investors ahead of the announcement, “concern about the lead time was raised by virtually everybody,” he says.

“They said, ‘If you’re going to do this, you need to give us a lot of time,’” Blitzer notes.

He predicts that the transition is likely to proceed smoothly as it doesn’t involve any changes in the definitions of industries or industry groups.

“An institutional investor can look at any company and where it is in GICS today and know exactly where it’s going to be in GICS in August 2016,” Blitzer says. “We’ve picked up a big piece of Financials and just set it up on its own.”

While there may be some short-lived market disruption when REITs are removed from financial sector indices, “the dollar amounts involved are not really large enough to cause more than a ripple,” according to Kirby.

“Ultimately, we will see more REIT-centric investment vehicles formed to focus on the new sector, and the net result should be positive,” he says.