As Alexandria Real Estate Equities (NYSE: ARE) marks the 20th anniversary of its founding, the provider of state-of-the-art real estate for the science and technology industries is seeing occupancy, demand and new development all reach record levels.

Alexandria focuses on developing class A assets clustered in urban campuses with close proximity to leading academic and research institutions. The company is active in the San Francisco Bay area, Boston, San Diego, New York City, and Seattle markets, among others.

Alexandria’s stock price has risen about 17 percent this year, compared with a 14 percent gain for the FTSE NAREIT Equity REITs index. 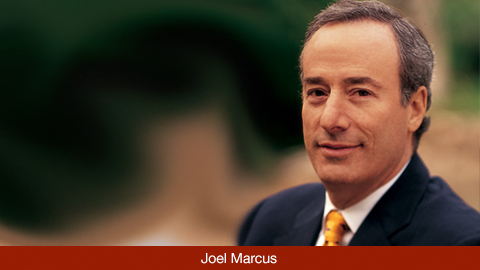 Alexandria’s tenants include some of the leading names in medical research: Dana-Farber Cancer Institute, Eli Lilly and Co., the National Institutes of Health, Pfizer, Inc., Roche, and Stanford University.

“Right now, we have an insatiable demand. We can’t service all the demand we have,” said Marcus.

Factors behind the current boom include the advent of a new generation of precision medicines, such as cancer immunotherapy drugs, Marcus said. At the same time,  the Food and Drug Administration has been approving safe and effective drugs at an all-time record high, he added. Both developments have increased the need for scientific research space.

To illustrate the current level of demand, Marcus points out that the company  has about 1 million square feet of shovel-ready land in Cambridge, Ma., but demand for the space is two to three times the availability. With demand outpacing supply, “it’s a matter of trying to select the best tenant fit and the ones that are most in sync with what we’re doing,” according to Marcus. As for rents, the current imbalance is “clearly pushing them higher,” he added.

“Alexandria was the first mover in a lot of those locations that they’ve owned or controlled for quite some time,” he said. “Competition for those locations has substantially increased.”

Alexandria currently has about $1 billion of active development projects and $1 billion in the pre-construction stage, a record level for the company.

“Managing that pipeline effectively and appropriately, and keeping it right-sized relative to the balance sheet,” present both an opportunity and risk for the company, said Rodgers.

“The nature of the whole workplace has evolved,” Marcus said.

Much of that change has come from the influx of the millennial generation into the workforce, according to Marcus: “It’s critical to cater to either very talented engineers or scientists who are millennials – they don’t want cubicles.”

Alexandria’s uniquely designed  projects in San Francisco were one of the factors that attracted Uber Technologies, Inc., a ridesharing service started in 2009, to enter a strategic partnership with the company. The collaborative joint venture, which will be 51 percent owned by Alexandria and 49 percent by Uber, will allow Uber to expand its corporate headquarters in San Francisco, in conjunction with a 15-year lease for the entire project.

Alexandria expects to complete the project, located in the Mission Bay submarket, by the end of 2016. Mission Bay is home to the University of California, San Francisco  campus, as well as a number of Alexandria science and technology tenants.

Challenges from Possible Curb on Development

As Marcus looks ahead, he sees two main challenges. One is satisfying demand.

The second is “trying to thread the needle with cities,” referring to the possibility of tougher regulations on urban development.  For example, he notes that Cambridge has four new city council members who may make it harder to develop additional space in the city. Meanwhile, San Francisco regulations place a cap on new office development “at a time when demand is at an all-time high,” he said.

“Cities are failing to recognize that these are the best of times in a sense, because companies are providing substantial, well-paid jobs at a time when the government is trying to figure out how to stimulate the main street economy,” Marcus added.