Analysis: Own a Piece of the City

Cities are in an exciting period of growth and renewal as America’s economic engine. The Wall Street Journal, citing data from real estate broker Redfin, reports that between 2000 and 2010 more than a million baby boomers moved into the vicinity of downtown areas of the 50 largest cities. Educated and higher income people of all ages are choosing to live and work in cities, businesses and R&D hubs are driving innovation, and public spaces and cultural institutions are being re-imagined for quality of life.

According to a recent McKinsey & Co. report, “If the 21st century is the century of cities… urban America begins the millennium in a strong position. The largest cities in the United States – and in particular the nation’s broad swath of dynamic middleweights – dominate the economy as in no other region in the world.”

The redevelopment and growth of urban America’s real estate structure brings benefits and new opportunities for investors. There is growing need for all types of properties that can support the growth of new urban environments: multi-family housing units, office buildings, entertainment complexes, shops and restaurants, hotels and health facilities. There also is demand for industrial facilities, energy infrastructure, and the telecommunications facilities and data centers required to support the spiraling growth of consumer and business communications and computing technologies.

Real Estate Investment Trusts, known as REITs, offer a way for the average investor to access these opportunities. Equity REITs are companies that own and manage all types of properties, collecting rents from the tenants that lease the space – ranging from office-based businesses, to retailers, to apartment dwellers. REITs are required by law to pay out nearly all of their profits from the rents they collect to their stockholders as dividends annually. REITs also deliver capital gains from the sale of properties to their stockholders as dividends. For the investor in REIT stocks, the effect of this significant dividend distribution approximates ownership of income producing properties. Publicly traded REITs paid out $29 billion in dividends in 2012.

REIT stocks also offer the opportunity for share price appreciation, and their long-term returns have been competitive with those of the broader stock market. Over the past 10 years, the total return of the FTSE NAREIT All Equity REITs Index was 10.5 percent compared to 7.6 percent for the S&P 500.

REIT property portfolios are often weighted towards urban areas and typically consist of high-quality, class-A properties, which generally command above average rents. REIT stocks also have a track record of protecting against inflation since, as prices rise, so can rents, which go into shareholders’ dividends.

According to McKinsey, large U.S. cities, which are defined as those with 150,000 or more inhabitants, generate almost 85 percent of the country’s GDP. Additionally, the average per capita GDP of those in large U.S. cities is nearly 35 percent higher than those in smaller cities and rural areas. 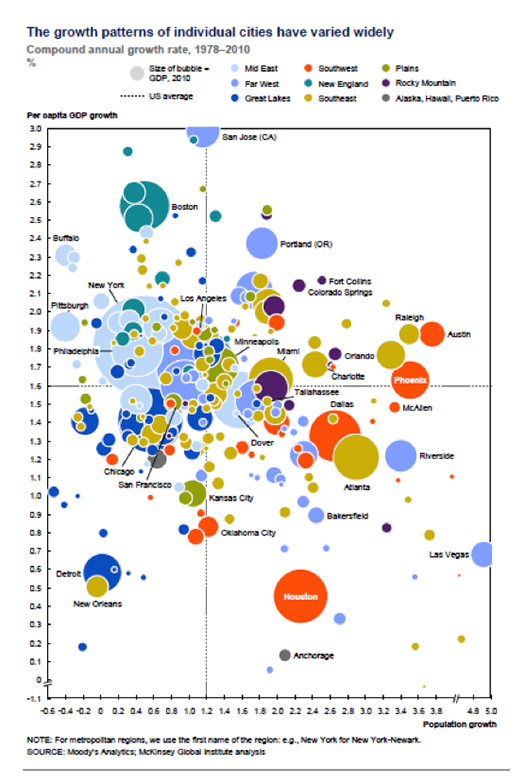 There are a few reasons for this. Much of this economic potential is a result of population growth in urban areas. Cities are home to 80 percent of the U.S. population, and the fastest-growing cities have grown their populations two and a half times the national average. Further, the people migrating to urban areas tend to be millenials, upwardly mobile 18 to 30 year olds, and boomers, who are near or at retirement age. Generally speaking, these demographic segments are well-educated and skilled, with medium- to high-incomes.

As urban populations have swelled and attracted top talent, urban areas have developed industry clusters that have led to greater economic growth, productivity and job creation. “What is changing now is companies in many sectors of our economy – think life sciences, think the app economy – are practicing what we call open innovation,” said Bruce Katz, founding director of the Brookings Metropolitan Policy Program, in a recent interview with NPR. “They want to be close to other companies and they want their workers to mingle, interact with workers in other firms.”

These clusters contain entire economic ecosystems ranging from suppliers and manufacturers to distributors, academic institutions, and researchers. Examples include San Jose’s Silicon Valley for technology, Boston for financial services and life sciences, Los Angeles for the entertainment industry, and Houston for the energy, chemical and medical services industries. Austin is home to thriving technology and advanced manufacturing industries. Nashville is known for country music, but it’s also a major automotive center. The Raleigh/Durham area is a hub for education, research and development, with a very affordable cost of living and substantial job growth.

REITs: Own a Piece of the City

The Emerging Trends in Real Estate 2013 report conducted by PWC and the Urban Land Institute highlights the focus that commercial property investors are placing on the market demographics, economic production, diversification, job growth, and residential appeal of urban areas today. The study concludes that “U.S. property sectors and markets will register noticeably improved prospects compared with the previous year, and the advances now gather some measure of momentum across virtually the entire country and in all property types.”

REITs are well placed to capitalize on changing demographics and urban growth. In fact, the PWC ULI report found that, “Sitting pretty at the top of the real estate food chain, public REITs consolidate their holdings in core, institutional-quality real estate “and reap the benefits of well-leased properties as well as ongoing solid income generation from national tenant relationships.

For example, the rise in young and medium-to-high income populations has led to more demand in high-end apartments with more amenities, which command higher rents, and a number of REITs specialize in this market. Moreover, businesses in urban areas are continually looking for the best office properties to encourage work production as well as retain and attract the best talent. Many of the biggest office towers and A-class commercial properties are owned by REITs. And finally, urbanization creates the need for attractive shops and restaurants to serve these populations, as well as hotels for visitors from other cities. Again, REITs own some of the best retail and hospitality space, with leading name brand anchor tenants.

As the urban landscape develops and changes to meet the needs of growing populations, changing demographics, and expanding industry hubs, REITs can offer attractive opportunities for investors. Investment opportunities in REITs are also easy to access. There are some 170 REITs traded on the New York Stock Exchange and NASDAQ, and investors can choose from nearly 300 REIT mutual funds and ETFs. About 225,000 401(k) plans now offer a REIT fund, and most target date funds include REITs. 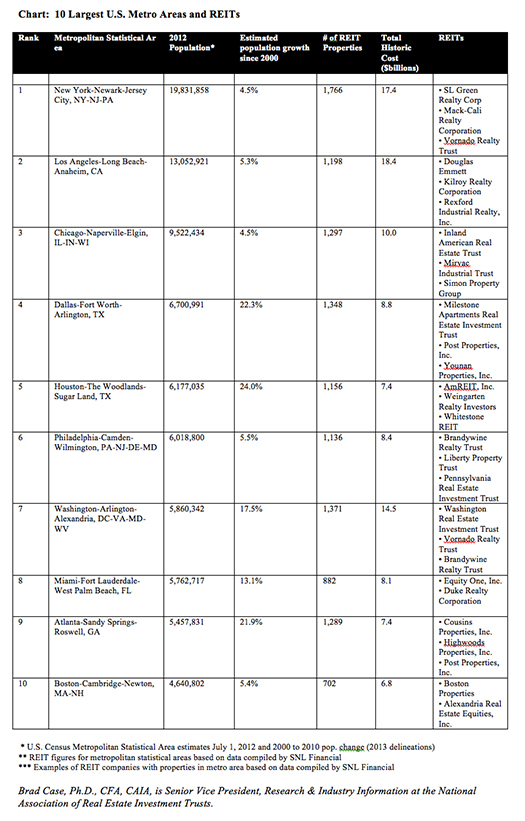