Analysts Remain Optimistic on REITs for 2019

After a volatile 2018, REITs are prepared to meet the challenges of 2019, including a number of macroeconomic factors like global trade, which has become more visible and volatile over the past year. But with strong performance anticipated in sectors including retail, data centers, and apartments, analysts say investors should still expect REIT stocks to perform well this year.

REIT magazine recently interviewed four analysts to find out how market volatility, M&A, and changes in retail will likely impact the real estate investment landscape in 2019. 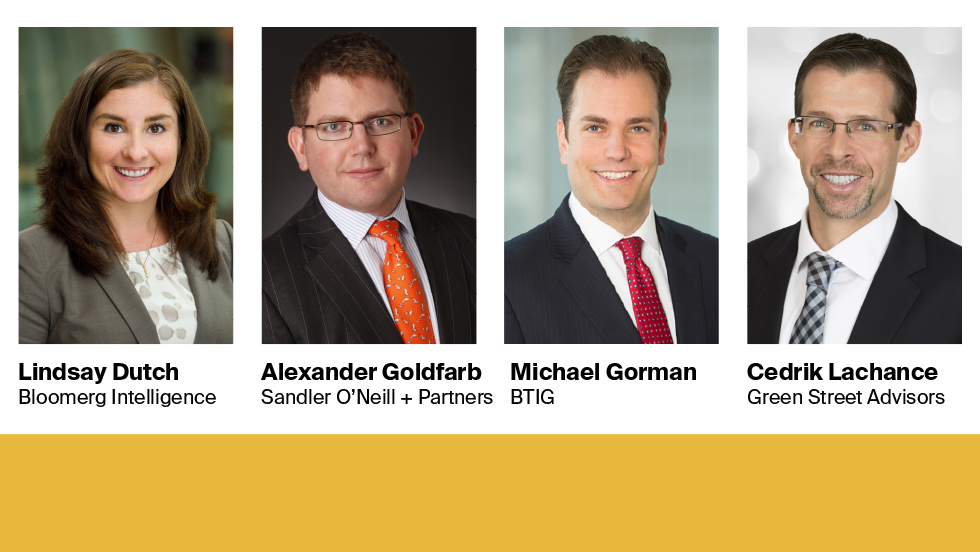 Q: As 2019 begins, what macroeconomic factors are you watching most closely?

Lindsay Dutch: There’s always interest rates, but this year, trade is a big factor. How that plays out can definitely have an impact on industrial REITs. The industrial REITs are benefiting from changes in retail supply chains and distribution, so if there is an impact on either the amount of goods that are coming into the U.S. or leaving, that will certainly affect the flows through the warehouses. It could also move them to different places within the U.S.

Alexander Goldfarb : The trade deal with China. The president has a different style than others, but part of the reason [he was elected] is to make some uncomfortable decisions. I don’t know of many people who would say that we should have the imbalances that we have with China as far as some of the lopsided trade barriers, but at the same time, the administration is willing to take a lot more disruption than the market would accept.

Michael Gorman: The big one is GDP growth. We’ve seen some estimates that are calling for GDP growth to slow below 2 percent in the back half of 2019, [and it can] trickle through to consumer spending. Interest rates have a longer-term effect, but they clearly have an impact on the acquisitions market, the cost of equity, and an incremental cost of debt.

The other [factor] is labor costs. You’re seeing [an issue] in the health care space, and on the retail side from the tenant perspective. There’s a real upward pressure on costs because of labor.

Cedrik Lachance : The most important piece is job creation for a lot of real estate sectors. We find ourselves roughly at full employment today, so it gets harder and harder to find people to create those jobs, but we’re still optimistic that there will be a healthy growth pace in 2019.

Q: What is your outlook for REIT M&A activity this year?

Dutch: I think the industrial REIT M&A activity might not be over. The rent growth is still very strong, and vacancy is very low. M&A is really the quickest opportunity for companies to broaden their exposure to that market. Development is getting a little bit harder because land is hard to come by [and] labor and construction costs are rising, so that changes the formula for development yields.

Goldfarb : I think M&A is going to continue in the REIT space. Like it always does, it’s going to depend on a willing seller. Hostile takeovers in REIT-land are very difficult, very few and far between.

Then also size of check, because most of the privatizations and takeouts have been smaller companies where the deal amount wasn’t that big. Larger deals [are] probably more the purview of stock-for-stock M&A; and smaller deals will probably be more focused around privatization.

Lachance : We continue to expect a slow pace of activity in terms of companies going away, and we suspect that most of that is likely to be public-to-public rather than privatizations. Too many companies in the REIT space have a lot of tools at their disposal to prevent a transaction.

We [also] see fairly significant portfolio discounts. That makes it more difficult for go-private deals to take place. There’s less appetite for assets in large quantities, but that doesn’t prevent a public-to-public execution.

Gorman: It’s going to be challenging for M&A activity to have a major impact on the sector if we continue to see a lot of volatility in the capital markets. That may present opportunities for private buyers to step in and take advantage of the mismatched pricing, but this kind of volatility makes public-to-public deals more challenging.

We did have some deals happen in 2018, but [specifically regarding strip center, triple net, and health care], I don’t foresee any public-to-public M&A.

Q: What dangers can the volatility we have seen pose for REIT valuations?

Gorman: There’s been a recent material pull-back in the yield on the 10-year and counter-cyclical sectors leading the REIT group, despite strong economic performance. But even though there are increasing concerns about what happens on the back-half of 2019 from an economic perspective, it’s hard not to continue being bullish on some of these cyclical sectors like industrial, hotels, apartments, and class-A malls, that are still showing good property-level growth.

Goldfarb: The more that the public markets remain volatile, the more money that will go into private real estate. When you buy a building, your perceived value isn’t going up or down 10 percent in a week or two.

Lachance : The real danger for REITs is that real estate prices are starting to look full and it is a fair betting line to think there will be declines in private market values in 2019. So the discounts to NAV we currently observe in the public market could start to close, but unfortunately could do so because real estate values decline.

Q: What other issues are impacting your expectations for REITs this year?

Goldfarb: A lot of the [shopping center] companies are using 2019 as a reset year and a lot of them are then planning to grow in 2020. The companies really have to prove that 2019 will be the low point and that [they’re] done selling. A number of companies have had multi-year disposition programs trying to re-orient their portfolios. At some point this needs to end and the managements switch to growing, rather than shrinking, unless the decision is made to liquidate.

Gorman: Comparability between companies is shrinking. Even though a lot of them report the same metrics, it’s hard to dissect the companies up on a metrics basis. You have to really look behind the metrics at the properties and what’s going on at an individual lease basis. There’s the potential for so much volatility that you almost have to ignore that and pay attention to the properties, the balance sheets, and the management teams.

Lachance : A big topic for me is the demise of the department store concept. Sears is effectively gone; and Bon-Ton filed for bankruptcy in 2018 as well. We’ll continue to see a lot of pressure on the remaining department store owners to right-size their footprint. As a result, there’s going to be a lot of space to back-fill in the mall environment in particular. That’s going to require significant capital. It is going to put a strain on the companies that have less access or less flexibility from a capital-raising perspective.

Q: What sectors do you expect to perform particularly well in 2019?

Dutch : The retail sector will be especially interesting because the changes with the retail environment have really broadened the gap between higher-quality assets and lower-quality assets. The fundamentals have definitely been improving for the REITs that own high-quality malls and shopping centers, where occupancy is rising.

Leasing continues at a very rapid pace, and tenant sales are improving. It seems like the tenant watch list of those REITs has been shrinking.

Goldfarb : Companies that can demonstrate growth in the current environment of rising rates and tightening investment deals should thrive. REITs are almost in a better position than the broader market. If interest rates come back, if the 10-year tightens, and if we still have a decent economy, then REITs should be fine this year.

Gorman: We’re seeing very strong results out of the pro-cyclical sectors, including same store revenue growth accelerate at the apartment level. Same store industrial NOI growth remain strong. The class-A malls are starting to show some positive trends. Even some of the high-quality strip centers are showing some positive trends as well.

Lachance : The data center space has had terrible share price performance over the past 12 months as it declined in sympathy with the FAANG, but the business of data centers is in the midst of a significant demand push that is not going away. In addition to that, you have exceptional development margins for the companies in the business.

Another sector that we like a lot is multifamily. You’re seeing higher mortgage costs to buy homes. You continue to see the historically limited amount of new single-family housing supply in the markets. You see multifamily supply that’s generally close to [or below] demand, so you have an environment where rents in a multifamily sector should continue to grow, while the entry price is really attractive versus other sectors.

Q: On the flip side, what sectors will face the most challenges this year?

Dutch: I think the self-storage REITs have been stuck in a rut of declining revenue growth, and that looks like that is going to continue into 2019. Even though supply might be abating slightly from 2018 levels, the impact of new deliveries is still going to hurt in 2019.

Goldfarb : The direct pricing of assets remains very healthy, aside from lower-quality retail. The ability to drive earnings and dividend growth is really what’s the arbiter of which stocks will do well, and which won’t.

Gorman: I think it’s going to be very choppy for strip centers, although I think there are strip centers that will thrive in 2019. It’s not all that dissimilar from what we saw in 2018. With a huge spread within a sector, it’s almost not fair to make a macro call. It will be very similar [this] year too. It’s not a procyclical sector, and it’s not a counter-cyclical sector.

Lachance : Office. It’s a business where the cap-ex is enormous as a percent of income, and the market doesn’t really take that into account properly. Whether the competitive drivers come from new buildings or whether they come from a desire for more flexibility, the office business just finds itself amid a pretty significant cap-ex wave.

Malls also trade at levels that suggest some caution about the upcoming capital requirements and the impact it will have on values.

Q: Any final thoughts for investors to keep in mind for 2019?

Dutch: What retail landlords decide to do with closed Sears stores will really prove their adaptability. Retail real estate is here to stay, even if there is just a little bit too much of it right now in the U.S.

Goldfarb: If you’re a deep value investor, you have your pick of the litter in shopping centers. The trouble is, when will the earnings actually grow, versus remain flat or continue to decline? Thus, cheap doesn’t cut it in our book. There needs to be growth and it’s why our focus remains on companies that can drive earnings and dividend growth. In a volatile market, growth wins.

Gorman: In 2018, health care was the top-performing sector year-to-date, followed by apartments, followed by triple net. People are already moving into health care and triple net as protection. But for those sectors, investors have to be very selective going into 2019 [and] very focused on what underlying stocks they are choosing.

Lachance: Keep an eye on balance sheets, they are likely to matter more and more as the year unfolds.