Non-Gateway Office Markets May Be Worthy of Closer Look

In an interview with REIT.com, Christopher Macke, senior strategist at CBRE Global Research and Consulting said he believes investors should reexamine perceived notions about non-gateway office markets, especially since the discount on non-gateway property has been nearly 20 percent at times since the fourth quarter of 2007 and the first quarter of 2013. Attitudes toward non-gateway markets that were forged during the overbuilding of the 1980s have been hard to shake, he said. Many investors continue to believe that these markets are more volatile and unstable than their gateway counterparts, according to Macke.

Gateway markets tend to be seen as having higher barriers to entry. Yet, while it’s “very intuitive that you’d want to be in a market where you couldn’t just build endlessly,” Macke is quick to point out that gateway markets were also overbuilt during the ‘80s. Furthermore, he argues that the supply-constrained nature of gateway markets actually makes them more volatile because they are less able to adapt to changes in demand. For example, between 1992 and 2012, net absorption rates for gateway office property ranged between 4 percent and -3.2 percent. For the non-gateway markets, the range was between 2.5 percent and -1.9 percent. 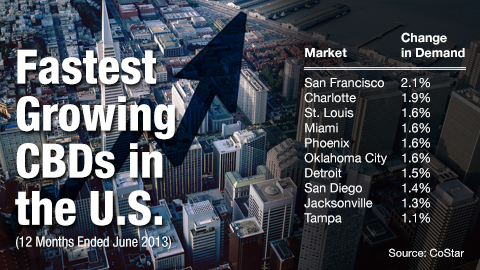 Between 1992 and 2012, the median annual rent decline for gateway markets during periods of falling rent was 2.7 times that of non-gateway markets, according to Macke’s research.

In gateway markets “the pricing falls more, the rents fall more, the liquidity—at the very time you need to sell—is just as bad in the gateway markets as it is in the non-gateway,” Macke said. “The very reasons people are paying these (gateway) premiums, they’re not necessarily true.”

Highwoods Properties, Inc. (NYSE: HIW) CEO Edward Fritsch, whose company is active in mid-tier markets in the Southeast, told REIT.com that “we continue to see a migration in our direction.” For example, he noted that in September his company announced a 427,000-square-foot build-to-suit project for MetLife, Inc.’s global technology and operations hub in Raleigh, N.C. Fritsch cited quality of life, education and affordability as prime factors behind MetLife’s decision. He indicated that he sees more companies following MetLife’s path to smaller markets where population growth “far exceeds” that seen in major cities such as New York and Chicago.

“There’s good reason to believe there’s plenty of opportunity for appreciation and growth in the bottom line in non-gateway areas,” Fritsch said.

Fritsch explained that “to some degree, it’s a very unique space and time right now,” because although demand for office space fell during the recession, global demand for commodities kept the cost of construction high. That has left pre-existing office owners in good position for the future, according to Fritsch.

“For those who invested in product that exists today, they really don’t have any significant threat from speculative development in the near term, and they certainly haven’t seen it over the last three to four years,” he said.

However, that doesn’t mean Knott is completely averse to buying office assets in the non-gateway markets. “There are a handful of markets I like almost as well as some of the gateway markets,” he said.

For those who are looking to invest in non-gateway markets, “timing is everything,” according to Macke. “If history is any guide, the spread between gateway and non-gateway office market cap rates will only compress as we move further into the economic recovery,” he said.