Nashville, Tennessee, has never been a target market for Pebblebrook Hotel Trust (NYSE: PEB), but that didn’t stop the lodging REIT from investing $52 million in a downtown hotel that was a perfect fit with the company’s strategy in every other respect.

Located inside a 19th century railroad station that is a National Historic Landmark, Nashville’s Union Station Hotel presented just the type of project Pebblebrook is on the alert for, according to CEO Jon Bortz.

“We typically like to buy hotels that are broken, that are under-utilized, under-managed and under-invested in, but are great real estate,” Bortz says.

Union Station Hotel is a 125-room, upscale, full-service hotel located on Broadway in the heart of downtown Nashville. The property first opened in 1900 as the Louisville & Nashville Railroad Station, built in the Romanesque Revival style using Tennessee limestone for the foundation and Bowling Green gray ashlar limestone for the exterior walls. The building features large semicircular arches, a clock tower topped with a statue of Mercury and an outdoor covered terrace. Above the lobby is a sixty- 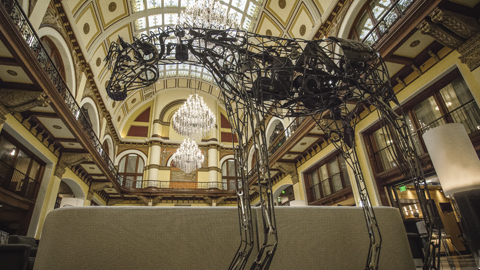 After passenger train service ended in Nashville in the 1970s, the building deteriorated. The metropolitan government of Nashville and Davidson County acquired the property in 1985, and it was converted to a hotel in 1986.  Pebblebrook acquired the property at the end of 2014 and maintained the hotel’s association with Marriott’s Autograph Collection.

Bortz says he was immediately drawn to the building’s “spectacular” architecture, yet he was acutely aware that the hotel’s guestrooms, meeting spaces and public areas were not in the same league as the splendor in which they were housed. Pebblebrook recognized an opportunity to make Union Station Hotel into a top destination for business, leisure and social events by matching the quality of the hotel interior with its grand exterior, according to the CEO.

Melding the Historic with the Contemporary 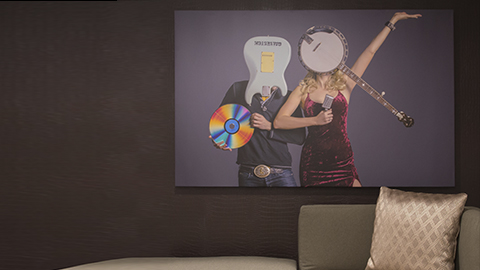 Part of the vision for the hotel, Bortz explains, was to celebrate Nashville and meld the old historic architecture with new contemporary furnishings. To achieve that fusion, Pebblebrook commissioned modern artwork that highlighted Nashville’s roots, but was in keeping with the new look of the hotel.

“In a city already filled with creativity, we are curating a distinctive, authentic Nashville experience,” says Michael Nelson, the hotel’s general manager. “The hotel entices trend-setting travelers with an adventurous spirit who are seeking distinctive hotels as part of their travel experience,” he adds.

Some of the commissioned artwork includes an eight-foot guitar, a country band atop an old baggage cart and a giant horse statue. All are made of recycled metals. “It’s very powerful art,” Bortz says.

Pebblebrook, working with Seattle-based Dawson Design Associates, also added three custom-made 10-foot chandeliers to the grand ceiling in the main hall. “The idea of the chandeliers was to bring some contemporary sparkle and elegance to the main room and to bring the 65-foot ceiling down to a human scale,” according to Bortz.

As for the guestrooms, upgrades included walnut feature walls, cowhide headboards, leather accents, and contemporary artwork and amenities. The total cost for the hotel’s refurbishment was $15.5 million. It was completed in October 2016 after 12 months of work, during which the hotel remained open. 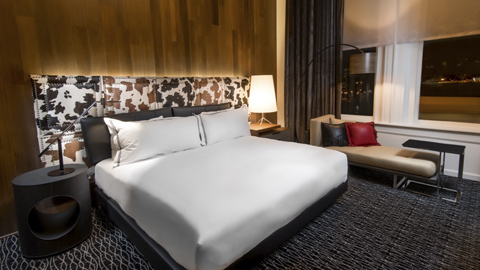 Bortz says local reaction to the renovation has been “tremendous.” In turn, Pebblebrook works hard to make Union Station an integral part of the local community. It regularly hosts events open to the public. The hotel is also a regular stop on any guided tour of the city, he points out.

“That’s really our general philosophy as a firm – appeal to the locals, and the out-of-towners will follow,” Bortz explains.