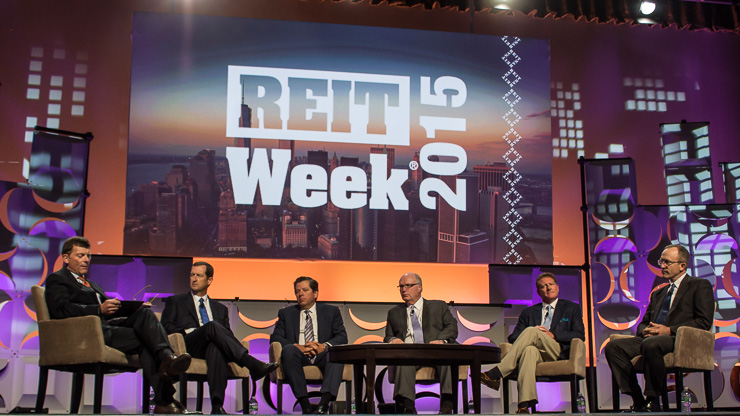 Speaking at a lunch panel on the first day of REITWeek 2015: NAREIT’s Investor Forum, executives from a diverse group of REITs expressed optimism regarding fundamentals in their particular market segments.

During the June 9 session moderated by David Neithercut, president and CEO of Equity Residential (NYSE: EQR) and NAREIT’s 2015 chair, the executives also pointed to favorable conditions in the capital markets.

Benjamin Moreland, president and CEO of cell tower REIT Crown Castle International Corp. (NYSE: CCI), noted that data traffic rose 60 percent in 2014, driven largely by video demand. He added that the company’s revenue stream is growing on an organic basis by about 5 percent per year.

Farmland Partners, Inc. (NYSE: FPI) President and CEO Paul Pittman said that despite a drop in key commodity prices in the last two years, there has not been a corresponding drop in farmland values. “This is still a very profitable time for most American farmers,” he said.

“Providers have become more rational,” he observed. “There’s a lot more discipline in our space.”

“We’ve more than held our own against social media,” Reilly remarked. “We feel good about where we are and where our customers are.”

Moreland commented that Crown Castle has “had access to capital all along the way,” while Reilly added that his company’s current cost of capital is at its lowest level ever.

“After 18 months as a REIT, the reception is very good,” Stein said.

For his part, Pittman said he hoped the reclassification of real estate as a separate sector within the Global Industry Classification Standard (GICS) will lead to better recognition of Farmland Partners’ asset class. During the next 12 months, Pittman said the main opportunity for the company lies in becoming “institutionally relevant.”