Amid slow job growth and a struggling economy, office REITs have struggled to gain ground since the onset of the recession. However, despite underperforming the broader REIT market, office REITs are generating stronger returns than a year ago as sector fundamentals improve.

Year-to-date total returns for office REITS through Nov. 8 were 12.63 percent, according to data from the FTSE NAREIT U.S. Real Estate Index Series. During the same time period in 2011, office REITs provided investors with total returns of 1.90 percent.

Jason Lail, manager of the real estate research group at SNL Financial, said the sector currently has the lowest vacancy rate since the end of 2009. Vacancies ticked down in the third quarter of 2012 to 17.1 percent from 17.2 percent in the second quarter.

Jobs are expected to continue to play a large role in the performance of the office sector. The U.S. unemployment rate was 7.9 percent at the end of October.

"Tenant uncertainty and a lack of confidence remain common refrains," he said.

Space usage is creating another headwind for the sector, according to analysts. Even if job growth does accelerate in the future, Lail said tenants looking to reduce their "space-per-employee exposure" could hinder demand.

While supply growth is limited overall, Knott pointed out that new construction is starting to emerge in certain markets, including in the San Francisco Bay Area. Office REITs currently have more than 4.5 million square feet in 21 new office assets under construction in the United States, Lail said.

"Two-thirds of those developments are expected to be completed by 2013 year-end," he said. 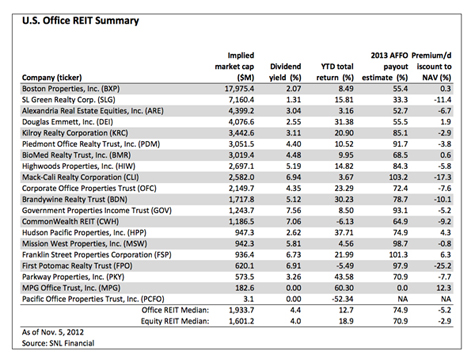