Earnings season opens this week as REITs begin to report second-quarter results. Significant declines in FFO and rising vacancies are expected in some sectors due to the impact of stay-at-home orders on business sales and employment. However, due the highly unusual nature of this recession, uncertainty about the path of the pandemic, and the potential for a robust recovery, in upcoming earnings announcements the management’s view of market conditions and discussion of the outlook are likely to attract at least as much attention as FFO.

Business activity had already begun to rebound during May and June, and even as the recent spike in new cases of COVID-19 causes setbacks, few analysts expect this recession and future recovery to follow the same patterns as during prior recessions. A simple model estimating change in FFO using change in GDP would predict an FFO decline of roughly 50%, in line with the decline that occurred during the fourth quarter of 2008. While the linkage between GDP and FFO does suggest that REIT earnings were sharply lower in the second quarter, the relationship with GDP cannot provide an accurate forecast of FFO growth, in large part due to the many ways today’s economy differs from past business cycles. 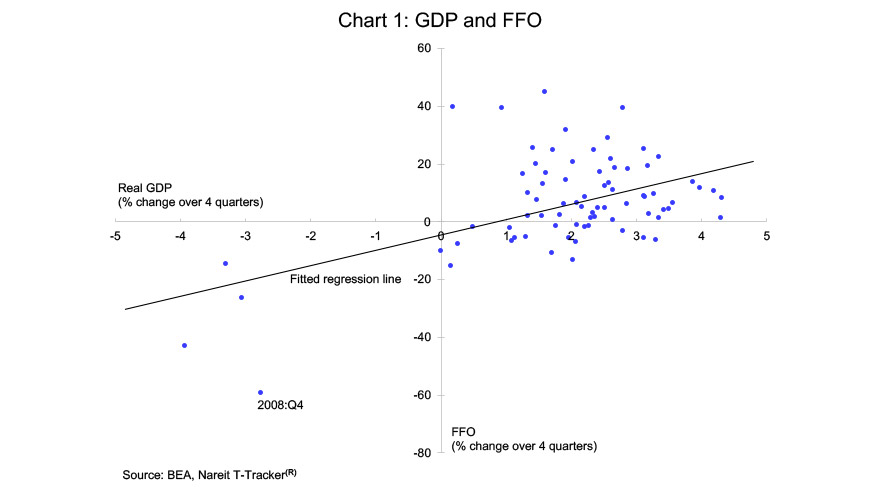 Even if there is no “V”-shaped recovery, activity may well recover more quickly than in past recessions, at least during the initial stages as stores reopen and employees return to work. Indeed, recent reports on employment, retail sales, housing starts, home sales, and industrial production have shown large gains in May and June from the troughs in April. The economic impact of the shutdowns was heavily concentrated in the service sectors, and many parts of real estate other than hospitality and retail did not close down to the same extent. In addition, the suddenness of the shutdown and the expectation that it would be temporary (although recent news suggests it could be somewhat less temporary in some regions) means that many tenants continued paying rents even as their receipts stopped flowing (the Nareit rent survey finds that a very high proportion of tenants of properties owned by REITs continue paying rent). And finally, as mentioned above there have already been significant rebounds in retail sales—which actually does trace out a “V”—and other business activity from the low points reached in the middle of the second quarter.

The various property sectors will almost certainly report dramatically different results. For example, lodging/resorts and regional malls have had some of the most significant losses of revenues during the shutdown, which will likely be reflected in FFO. On the other hand, the sectors that support e-commerce and the digital economy—industrial, data center and infrastructure REITs—have been relatively unscathed by the crisis. This suggests any sharp declines in earnings during the second quarter may be followed by partial recovery in the third and fourth quarters.

Chart 1 plots the relationship between growth of real GDP and growth of FFO (FFO has been adjusted for inflation using the GDP deflator. Both GDP and FFO are measured as percent change over four quarters). The positive relationship between economic growth and REIT earnings is clearly visible in the scatter plot. Each percentage point of GDP growth (or decline) is associated with five percentage points of FFO growth (or decline), represented by the regression line (for the quantitatively-minded reader, this positive relationship is statistically significant, with a t-statistic of 5.38). There is quite a bit of dispersion around this line, however (the regression explains just over 25% of the variation in FFO growth), so we do not consider this analysis of the relationship between GDP and FFO to be a precise forecast of second quarter results.