For REIT investors 2017 turned out to be a very normal year—but that was a huge disappointment given the “irrational exuberance” that investors in some other parts of the stock market enjoyed. Total returns for REITs (the FTSE Nareit All REIT Index) averaged +9.27 percent, just slightly less than the long-term average of +9.72 percent per year over the 46 years since Nareit started the index. That’s fine, but it didn’t compare with the fabulous +30.21 percent for large-cap growth stocks (Russell 1000 Growth), much less the +38.83 percent for large stocks in the information technology sector (S&P 500 Info Tech).

Many market participants, sensibly fearing that the “irrational exuberance” of 2017 has begun to look very much like the dot-com bubble for which that phrase was originated, have stepped up their search for assets that may have been overlooked and become undervalued. With evidence that real estate operating fundamentals are likely to continue to be strong for several years into the future—but with REIT returns having been stuck in “normal” gear while their underlying return drivers have been firmly in “expansion”—REITs are an obvious place to look for assets that are likely to outperform going forward.

So how can we develop empirically-based REIT return expectations for 2018?

Investors can use any of several models to determine whether REITs are undervalued or overvalued. Among other methods, they can estimate the value of each REIT’s properties and compare its stock price to the per-share value of its asset portfolio net of debt and other liabilities (the P-NAV method) or they can predict each REIT’s funds from operations over the next year to form an earnings valuation ratio (the P/FFO method). I prefer a method that is simpler but that has proven to be remarkably dependable in the past: comparing REIT dividend yields to the yields on other investments that, like REITs, provide strong and steady income streams.

Deviations from the historically normal 80-180 bp spread between REIT dividend yields and Baa-rated corporate bond yields have generally provided a surprisingly reliable valuation signal and a surprisingly reliable predictor for future performance. The reason is simple: given the extremely steady pace of REIT dividend distributions, major changes in the yield spread arise primarily because REIT stock prices have been driven too high or too low relative to their future performance expectations.

The historical data can also be used in a regression, as shown in Chart 1. The yield spread (shown in grey) was extraordinarily high—in fact, it was positive at +0.51 percent—at the end of 1999, a time much like today when REITs had become “overlooked and undervalued” as the tech stock bubble inflated relentlessly. The regression predicted extraordinarily high returns for REIT investors over the next 12 months at +29 percent—and indeed investors who bought in to REITs at that time were rewarded with total returns averaging +26.37 percent that outpaced the broad stock market by 33.83 percentage points. 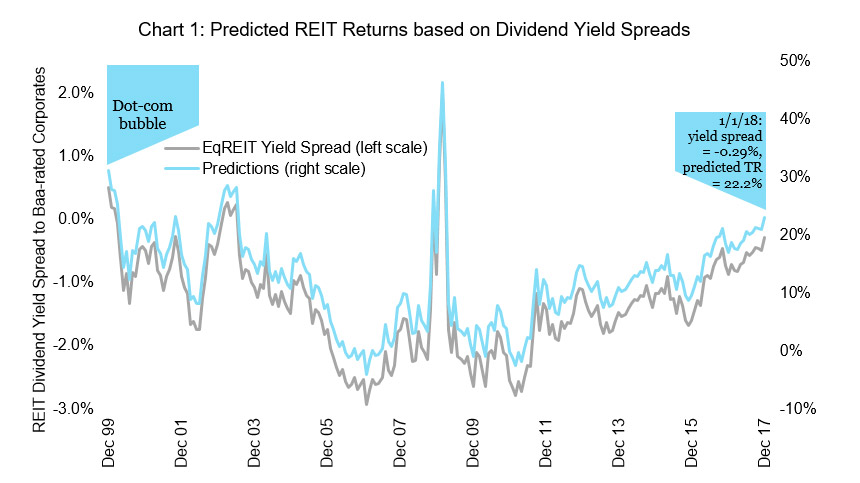 As the tech bubble burst and investors rediscovered REITs, the REIT dividend yield spread to Baa-rated corporates declined steadily until it reached its lowest value of -2.94 percent at the end of January 2007. At that level REIT total returns over the next 12 months were predicted to be negative and to underperform the broad stock market—and both predictions were true, although the model failed to predict the severity of the downturn with REIT returns of -23 percent underperforming the stock market by 20 percentage points during those 12 months.

The right edge of Chart 1 shows the most current prediction from the regression model. If the historical relationship continues to hold, then the dividend yield spread of just -0.29 percentage points as of the middle of December 2017 would translate to REIT total returns of 22.18 percent over the next 12 months and to REITs outperforming the broad stock market by 6.68 percentage points.

An investment strategy of bucking the rest of the market—looking for undervalued assets when other market participants have become captivated by the latest “unicorn”—has proven itself time and time again: if the crowd has rushed in then the crowd’s assets will be overvalued, so if you separate yourself from the crowd and focus on a strong operating environment instead, you will almost certainly find assets that have become “overlooked and undervalued.” In the current market situation, that certainly describes REITs.