Commercial mortgages are to the real estate market like rainfall is to a farmer. Too little rain and the crops dry up, but too much and floods can destroy the fields. In commercial real estate, too little credit and business is stifled, but too much debt can lead to speculation, overbuilding and defaults.

Recently there have been worries that the market might be getting flooded with credit. On the other hand, there have also been concerns about a drought in the CMBS market. What’s going on with this weather?

New data from the Federal Reserve indicate that credit is available to commercial real estate markets, and it appears to be enough, but not too much. Total net lending in commercial mortgages was $137 billion in 2015, a 50% increase from 2014. Banks and other depositories are providing nearly all of the commercial mortgages (which prompted the worries about bank lending in the Financial Times). The CMBS market, meanwhile, has not been a significant source of funds (causing Blackstone to fret about a credit drought). Total commercial mortgage borrowing, despite the recent surge, was only half the amount as in 2007. On balance, when considering the credit from all sources, lending to commercial real estate appears neither overly strong not worryingly weak. 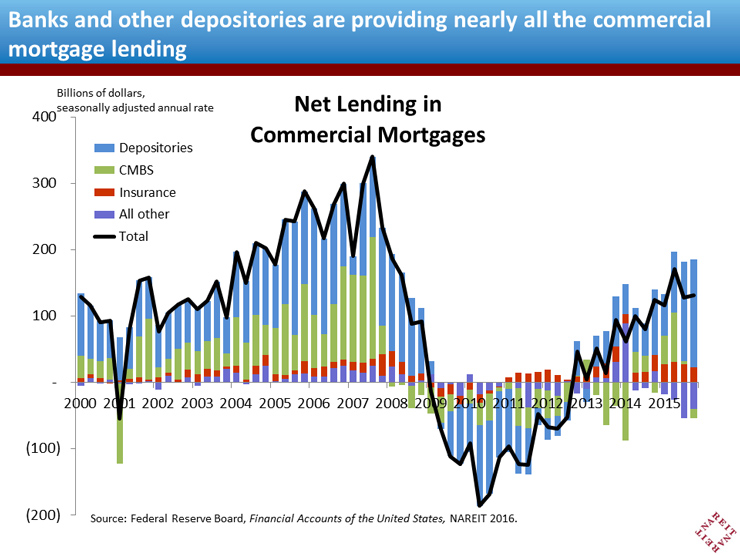 There’s also little evidence that excess credit is fueling a speculative price bubble. Consider what occurred prior to the financial crisis. Commercial mortgages grew at a double-digit pace between 2004 and 2008, and at times debt growth exceeded the appreciation of commercial property prices by a wide margin. Excessive lending caused rising leverage and fueled the price rise. 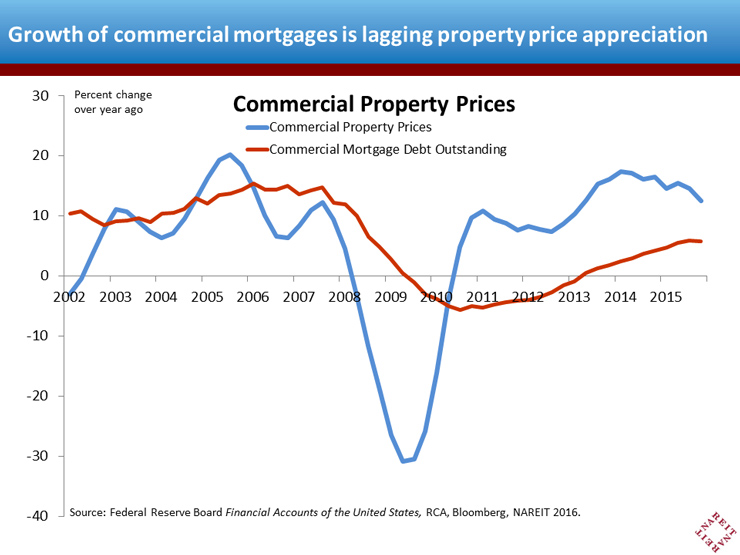 Today, the picture is reversed. Commercial property prices, as measured by the Real Capital Analytics (RCA) index based on commercial property transactions, did increase 12.5% in 2015:Q4 over a year earlier. But the rise has not been fueled by debt. Total commercial mortgages outstanding continued to contract until 2013, and growth was in the low single digits through 2014 before rising to 8.7% last year.  As a result, owners’ equity (the inverse of leverage) has been returning back to decade-ago levels, in both commercial and residential real estate. Improving macroeconomic and market fundamentals, not debt, are supporting the recovery in commercial real estate markets. 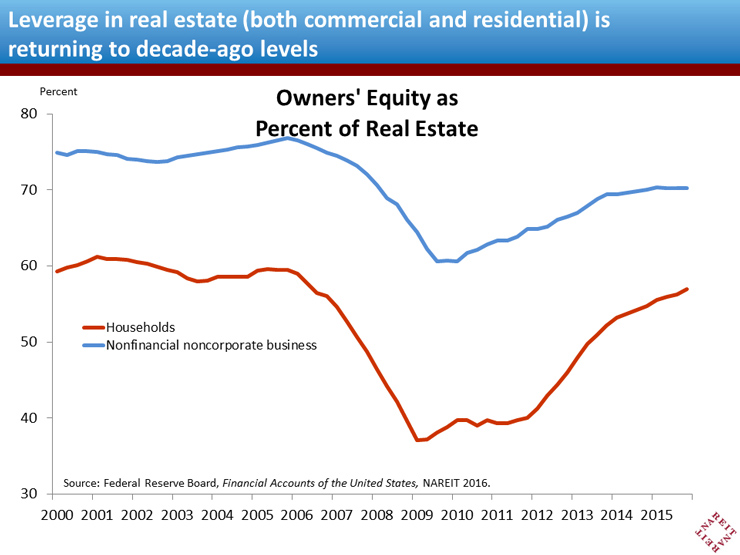 There are other worries, however, about commercial property prices. The FTSE-NAREIT PureProperty® Index Series, a stock-price based indicator of real estate valuations, declined 8.4% from 2015:Q1 through the end of last year. Because stock prices are not based on past transactions, like most other real estate valuation measures, but instead are driven by investors’ forward-looking expectations, the PureProperty Index can be a highly useful signal of changes in commercial real estate prices over the following year to 18 months; indeed, the PureProperty Index anticipated the downturn in 2007 nearly a year before the peak in transactions-based prices. 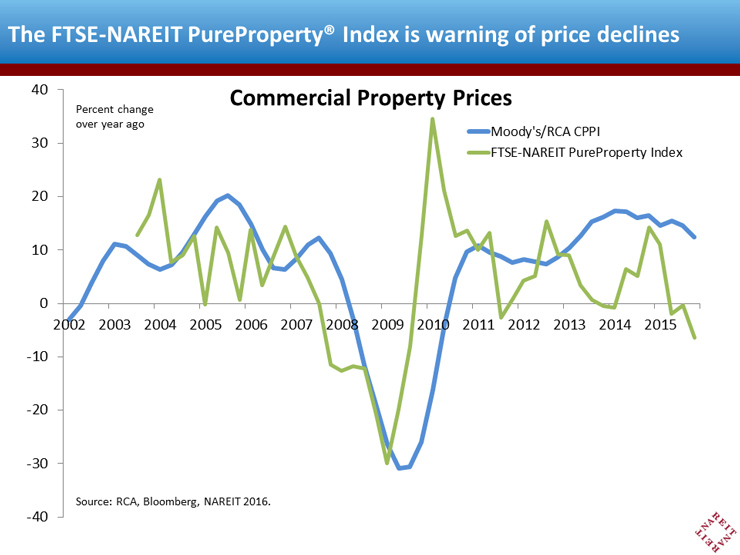 The two series diverged in early 2013, however, during the “taper tantrum” nearly three years ago over future interest rate increases. It is an open question whether the public market signal, or the recent trend in transactions values, is the better guide to future valuations. To date, however, moderate debt growth and solid fundamentals, including record occupancy rates, rising rent growth and a shortfall of new supply relative to demand, have continued to support the market.