Commercial property prices continued to climb through April, with the value-weighted CoStar Commercial Repeat Sales Index showing a 9.1 percent increase over the past 12 months. Price gains have accelerated in the early months of this year to the fastest rate since 2015, and prices are nearly 30 percent higher than their 2007 peak. Multifamily properties have outpaced other sectors, with prices 50 percent about their pre-crisis peak, having posted a 12.2 percent rise over past 12 months. 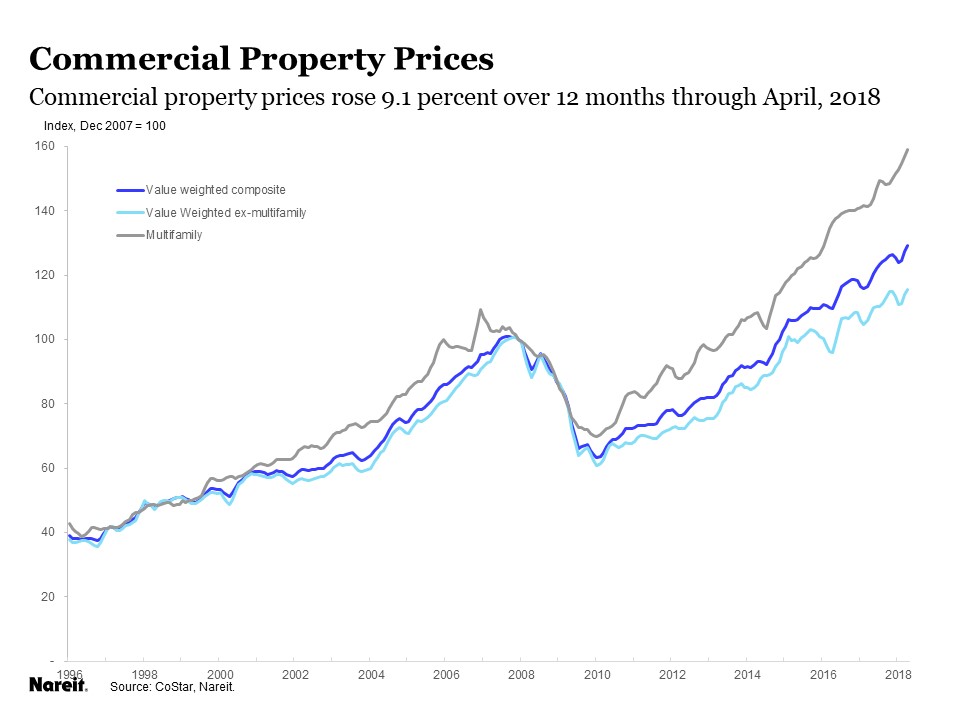 Recent price increases are surprisingly large, especially considering concerns about both rising interest rates as well as the supply of new buildings being completed. Indeed, some analysts have warned that speculative pricing in commercial real estate poses risks of price declines in the near future. Why, then, do prices appear to defy gravity?

Demand for real estate remains robust, and rising NOI provides solid support for valuations. A major factor contributing to rising valuations is that vacancy rates have remained low as growing demand has kept pace with new construction. Solid demand for commercial space and low vacancy rates have helped keep rents rising for all the major property types (See the Nareit Commercial Property Update for a review of supply, demand and rent growth in the main property sectors).

New construction has been restrained in the current real estate recovery to date (although, given the history of boom-bust cycles in real estate, the construction pipeline bears watching). Construction activity has actually slowed since early 2017, and remains below its long-term trend relative to GDP. A smaller supply pipeline in the months ahead is likely to translate into continued low vacancy rates and rising rents, and property valuations that are stable or even rising higher. 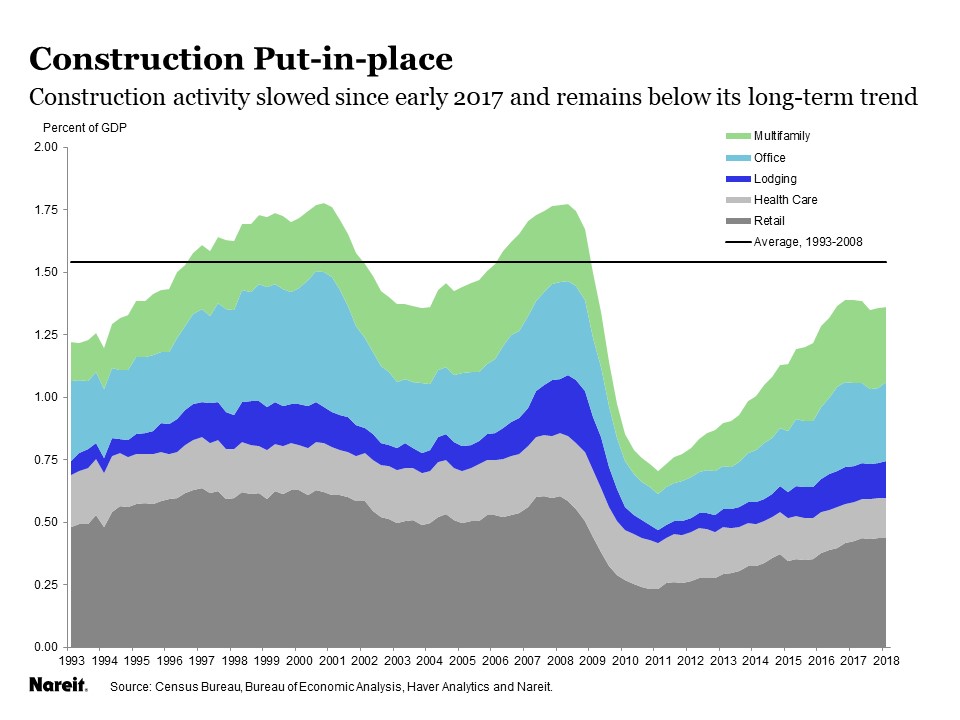 The increases in interest rates that have taken place over the past year or so do not pose much threat to the real estate sector and commercial property prices. Rates have moved from ultra-low to low, and are still attractive for financing deals. Indeed, commercial property transactions over the past 12 months have been in line with the sales pace over the prior two years, indicating that demand continues to be firm even as financing costs edge higher.

Higher interest rates would pose a risk to property valuations if rising rates began to put upward pressure on cap rates. So far, however, cap rates have remained low, in large part because the spread between cap rates and Treasury yields had been unusually large. These spreads have narrowed over the past year, and if interest rates continue to move much higher, sooner or later the increases would push cap rates higher and property prices lower. Treasury yields have pulled back in recent weeks, though, and future increases are expected to be gradual. Like the concerns about construction activity, it will be important to pay attention to the interest rate outlook in the months ahead.

Rising property valuations are good for REITs. There has been an extensive debate about the valuations of real estate in public and private markets, as share prices of REITs have not kept pace with property prices as measured by the CoStar index or other similar measures. REITs’ main assets are commercial properties, however, and REITs buy and sell properties in the same markets that are reflected in these transactions indices. Higher property prices directly increase the value of REIT assets and, regardless of short-term equity market moves, have nearly always translated into higher long run total return for REIT investors.