Apartment markets eased slightly, with a small uptick in vacancy rates and deceleration of rent growth. A seasonal slowing may be partly responsible, as the fourth quarter is often one of the quietest times of the year. Nevertheless, there are few signs of slack in the market, and vacancy rates in the low 4’s indicate that demand still exceeds new supply, even in the face of increased construction activity. 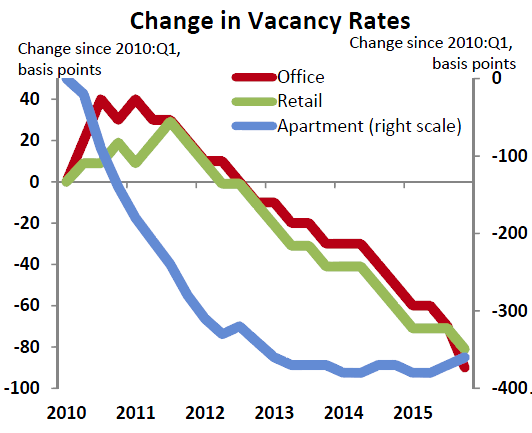 The office sector benefitted from stronger employment growth late last year (see reverse for discussion of labor market developments). The vacancy rate dropped 20 bps in Q4, a more rapid decline than the recent trend. For 2015 as a whole, net absorption increased nearly 40%, well ahead of the new office space completed. Rent growth edged back up to a 3.3% annual rate. 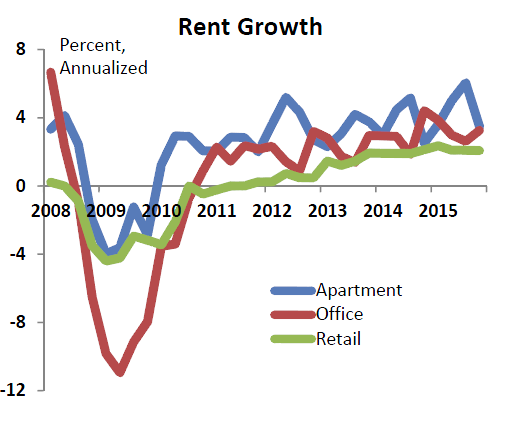 Retail sector vacancy rates moved lower after being unchanged for most of the year. E-Commerce continues to grab the lion’s share of growth of retail sales, limiting the demand for additional bricks & mortar store space. (The industrial sector, of course, has benefited from the upswing in demand for logistics facilities to deliver items bought online.) Retail rents are rising, but slowly. 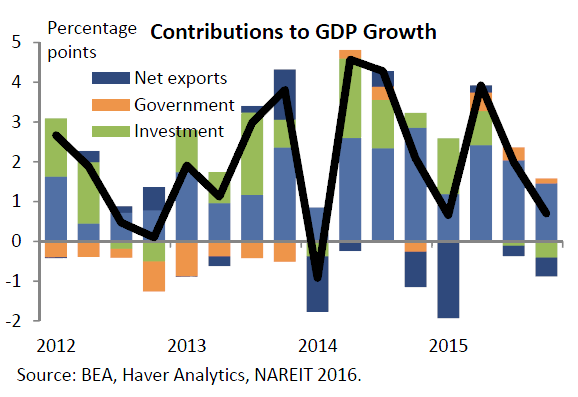 But the job market accelerated. Job growth picked up in Q4 to an average monthly pace of 285,000, well above recent trends (red dot in chart). Unemployment rates are low, in part from more robust hiring but also because of those who are not seeking employment and thus not counted in the unemployment survey. Wages have also lagged in this recovery. On balance, labor market conditions have improved, but have further to go in order to generate the solid gains in household income that would underpin a more robust economic recovery. 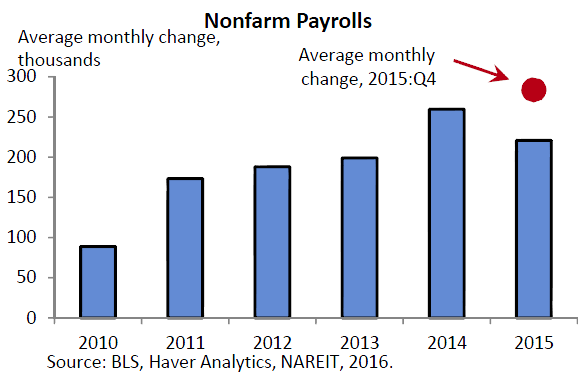 Interest rates continue to confound. Yields on the 10-year Treasury note moved back down below 2% in early 2016, defying expectations that long-term rates would march steadily upward once the Federal Reserve began raising their target for short-term rates. Yet as the chart shows, professional forecasters have been anticipating higher long-term rates for well over a decade (consensus forecasts in thin colored lines) even as actual rates moved lower and lower (solid black line). This track record suggests some caution in projecting future increases in interest rates. 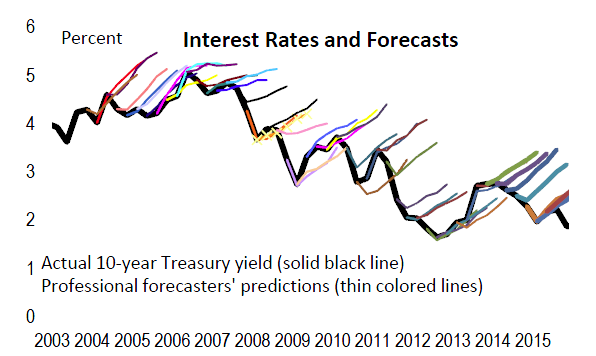