Commercial real estate markets got a slow start in 2019, as demand for leased space softened a bit in the first quarter for most property types, and rent growth slowed, according to recent data from CoStar. Demand didn’t fall, as it generally does heading into a real estate downturn, so the news is not alarming, but the increase in leased space was on the low end of the what we’ve seen over the past several years: 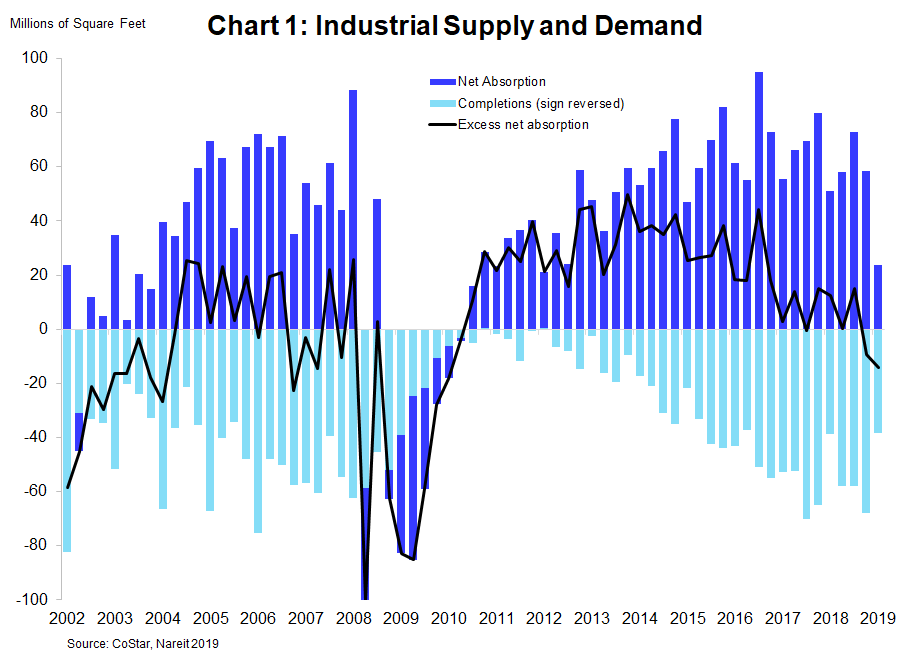 Demand for industrial space decelerated significantly, with net absorption of 24 million square feet, the lowest since 2012 (dark blue bars, chart above). The industrial sector has benefited from the tailwinds of e-commerce due to the rising need for logistics facilities to deliver goods bought on the Internet. There has been little sign of slowing of the fundamental drivers in this market, so the recent softness is likely to be short-lived; 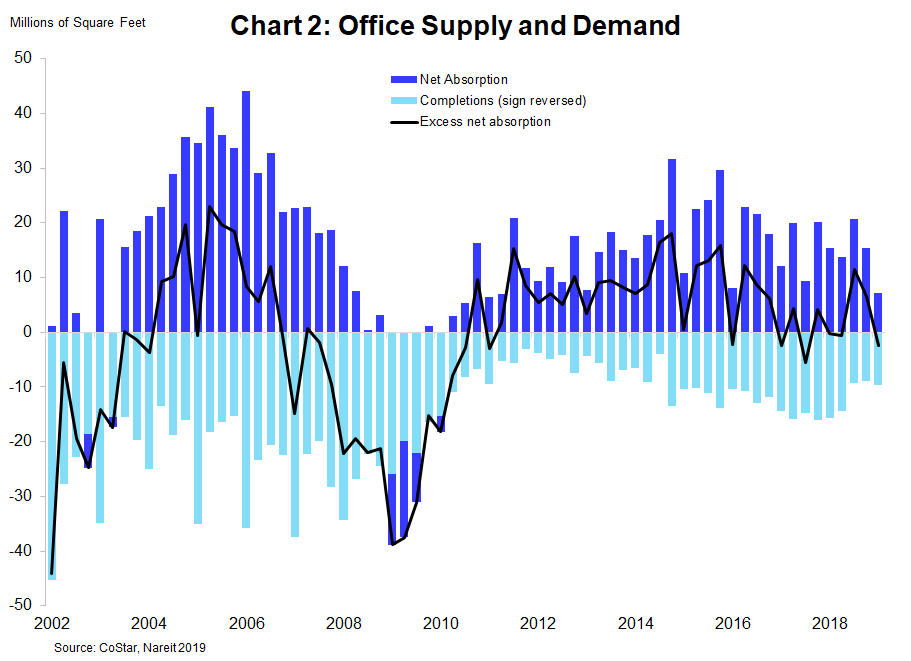 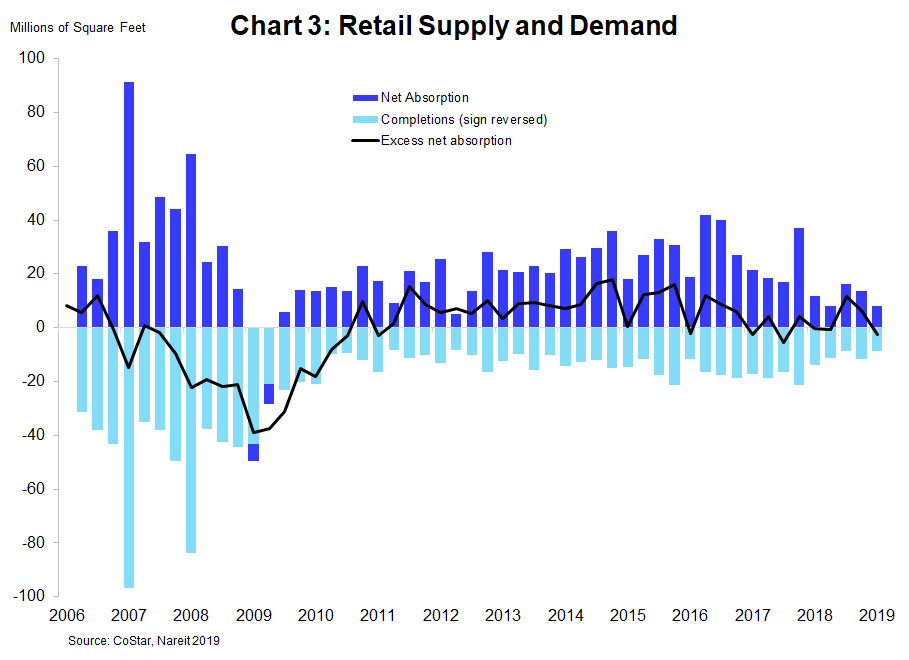 Retail properties had less of a decline in demand than other sectors, mainly because net absorption had already been at low levels. The 8 million square feet of net absorption was a bit above the recent low in 2018:Q2; 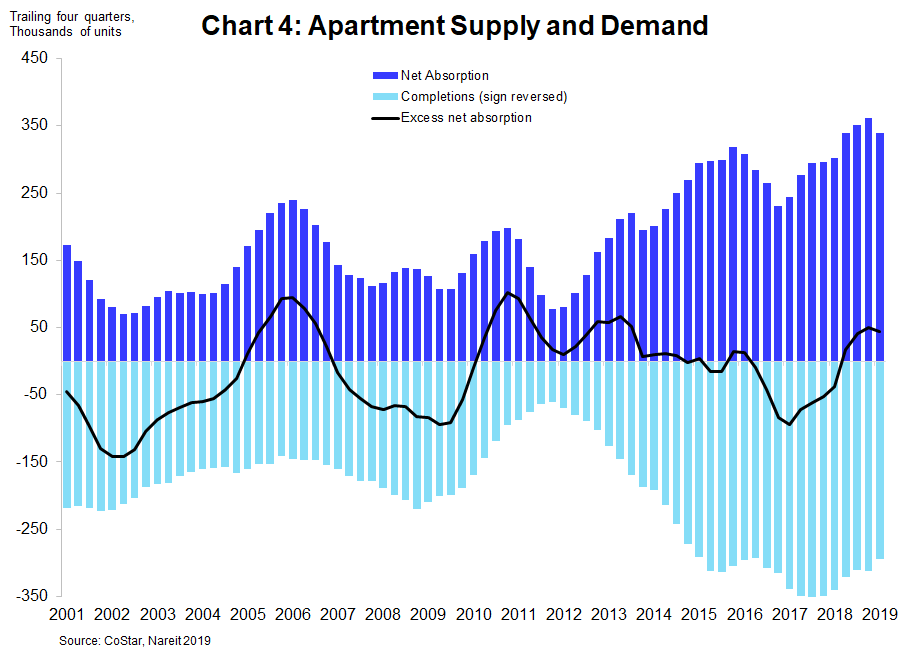 Apartment markets were the exception to the rule in the first quarter, with an increase in net absorption to 68 thousand units (chart 4 plots a trailing 4-quarter sum, as a strong seasonal pattern in apartment leasing makes the quarterly data rather noisy). 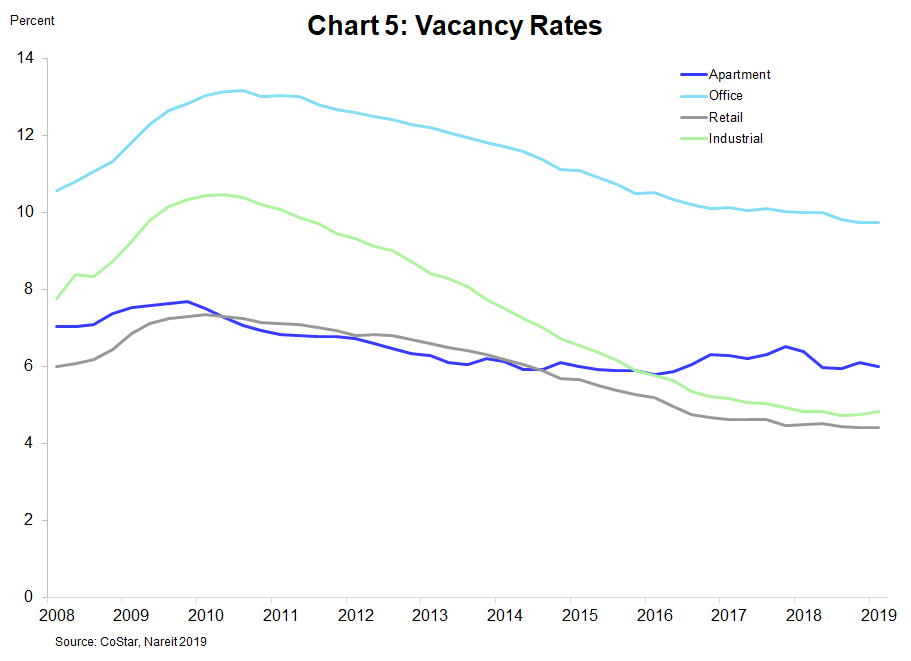 The slowdown of demand was modest, and did not lead to meaningful increases in vacancies. In fact, for all the major property types, vacancy rates remain near the low for the current expansion. Rent growth, however, did slow significantly across all property types. 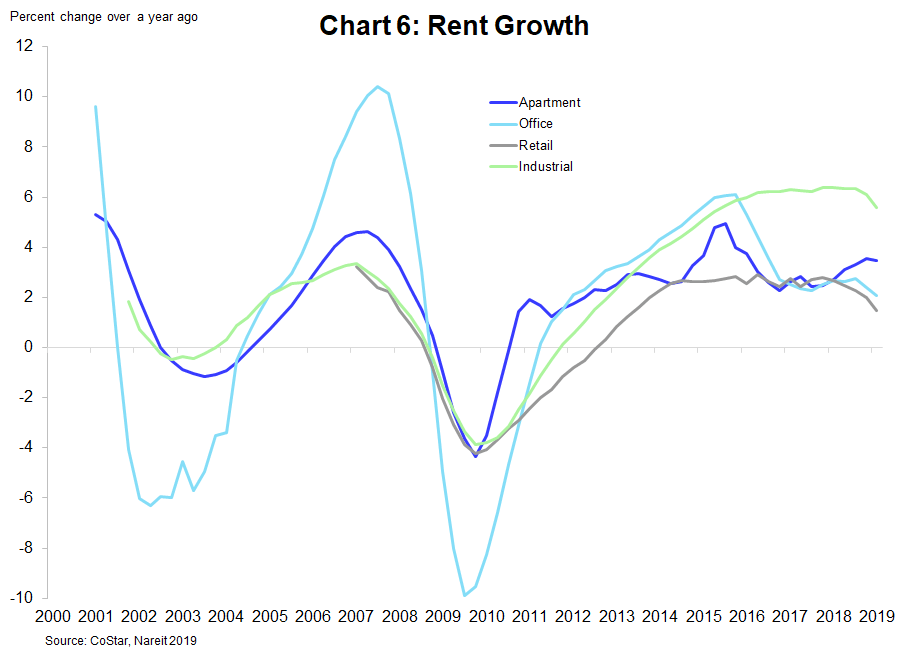 What’s the most likely explanation for the sudden slowing in real estate markets? One possibility is that fears of a recession and real estate downturn led to increased caution before signing a new lease. Global markets tumbled in the late fall and early winter, and many analysts raised their odds of an imminent recession (our own outlook published last December downplayed these concerns, placing only 20 percent chance of GDP growth slowing to less than 2.5 percent in 2019). The expansion continued in Q1, however, with a solid gain in GDP and good job growth. If the softness in demand for real estate was related to the recession fears, we may see a rebound in the spring and summer.

Apartment markets, on the other hand, continue to face strong demand from two non-traditional sources. First, there are still millions of Americans who are doubled-up with family members or non-family roommates, as household formation has not fully recovered since the housing crisis. This pent-up demand has proven to be more than enough to keep pace with new construction (see my commentary on the impact of shared households on apartment markets). In addition, the decline in the homeownership rate has resulted in a cascade of demand from would-be first-time homebuyers into rental markets. This spillover from single-family housing into apartment markets has increased overall rental demand, with an especially large boost to the demand for newer and high-end units (my colleague Alexandra Thompson and I recently presented our research on the impact of homeownership rates on apartment markets at the American Real Estate Society annual research conference).

The outlook for the economy and for commercial real estate remains favorable. To the extent that recent softness in real estate markets was due to transitory forces, there may be some room for upside surprises over the rest of this year.