Commercial real estate markets weakened in the second quarter as the COVID-19 pandemic, social distancing, and temporary closures impacted all major property sectors. Demand weakened even as construction projects initiated well ahead of the pandemic continued to be delivered to the market, leading to a rise in vacancy rates and softening of market rents.

Weakness in demand was pronounced in retail and office properties. The retail sector was among the sectors most impacted in the second quarter, as many retail tenants closed stores completely and the demand for bricks-and-mortar retail space was already dealing with competition from online sales. Net absorption in the retail market was negative, with total leased space declining by 12 million square feet (dark blue bars in chart 1). Completions are shown in light blue bars, with sign reversed, as rising supply is a negative factor for market conditions. The black line shows excess net absorption, which is the difference between net absorption and completions). This decline in the second quarter follows a smaller drop during the first quarter. The total decline in leased space in the first half of this year is already greater than occurred during the 2008-2009 recession. 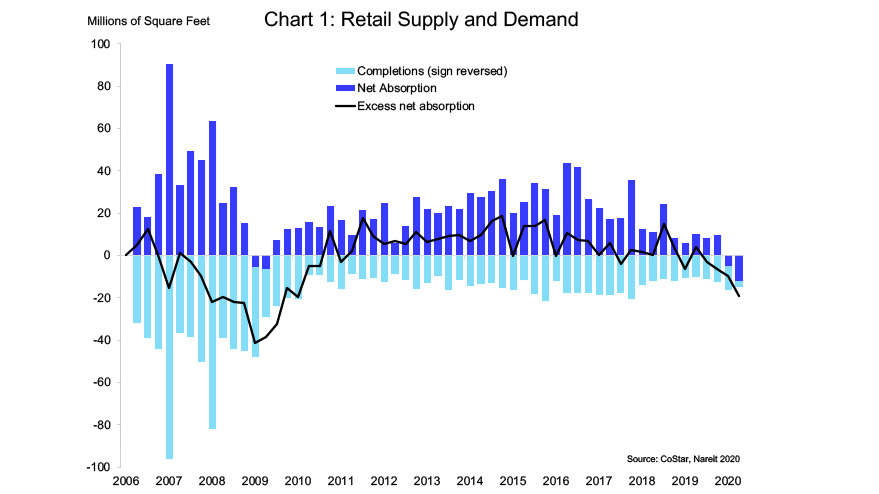 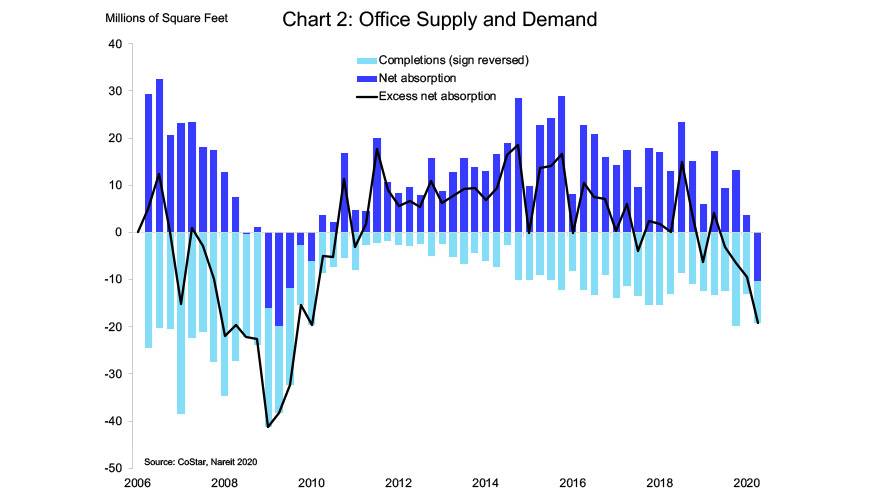 Demand continued to grow in apartment and industrial markets, but at a slower pace than in recent quarters. Net absorption in apartment markets was 46,485 units, a modest slowing from 54,982 units in the first quarter. There is a strong seasonal pattern in apartment demand, and in most years there is a surge in new lease signings in the spring after a lull during the fall and winter. This year, however, demand slowed during the spring leasing period. 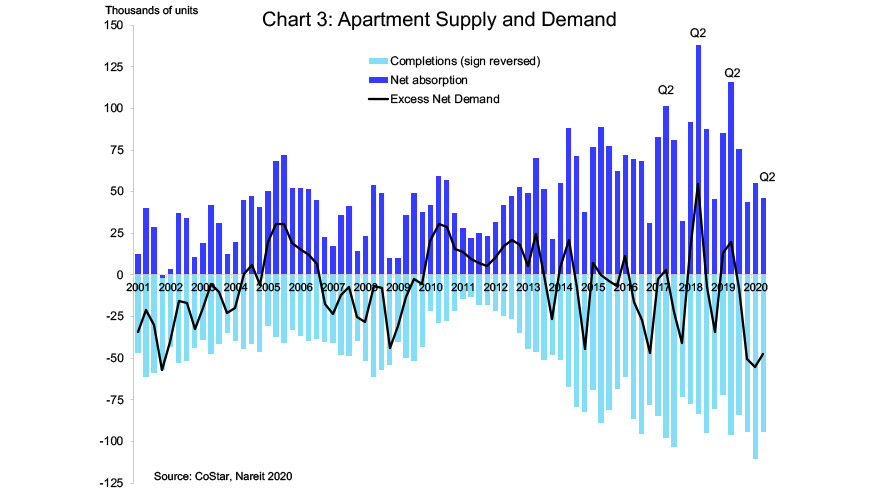 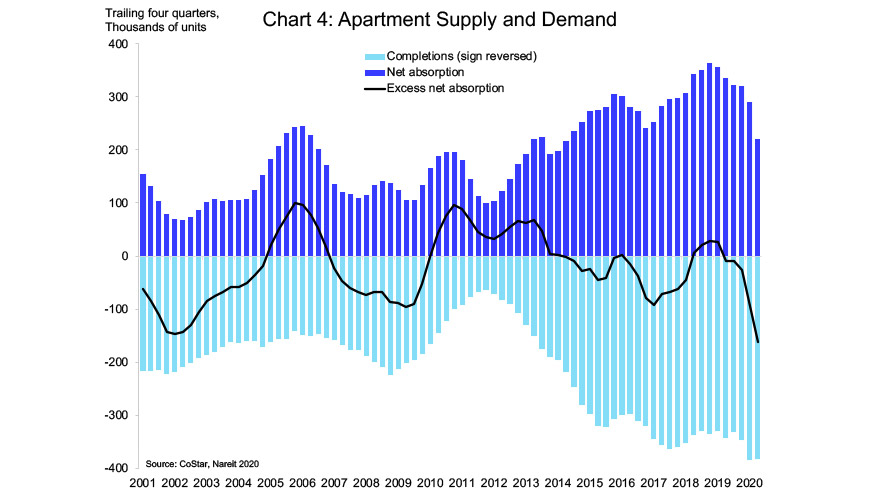 Industrial properties have been robust in recent years due to the demand for logistics facilities used in the shipment of ecommerce purchases. There has been an accelerated shift towards ecommerce during the pandemic that is expected to boost demand for logistics facilities. During the second quarter, however, net absorption slowed to 28.4 million square feet, or less than half the average growth of demand 2015-2019. Demand growth in the industrial sector is expected to rebound as an easing of social distancing rules allows the meetings needed for negotiations and sales to resume. 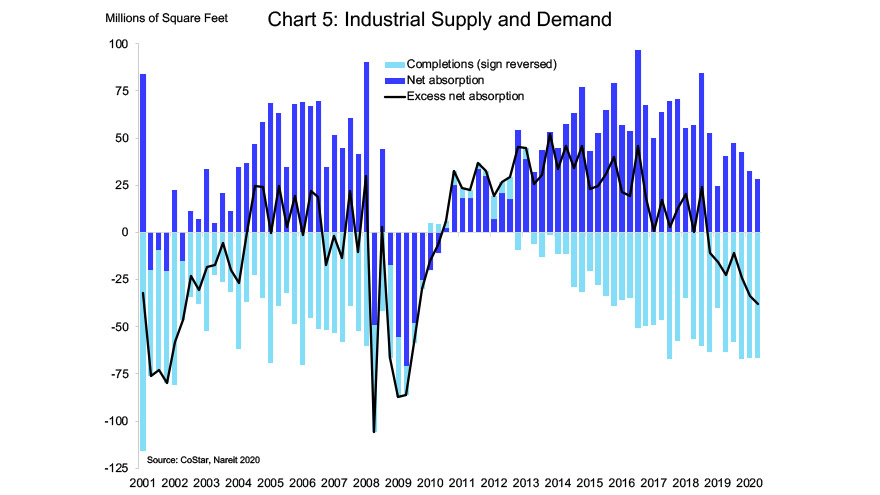 Vacancy rates rose in all major property types due to this slowing or negative growth of demand. Vacancy rates rose the most in apartments, increasing 24 basis points compared to the first quarter. This largely reflects the shorter lease terms in apartment contracts, generally two years, which allows for quicker turnover of apartment units. There were slightly smaller increases of 22 bps in office properties and 20 bps in industrial. Retail property markets, somewhat surprisingly, had the smallest increase in vacancy rates of 13 bps. 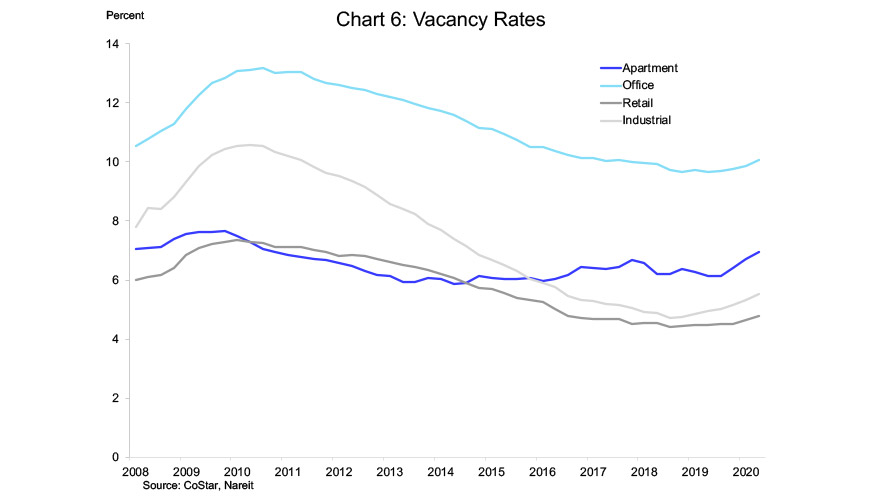 Rent growth slowed sharply across all major property types . Asking rents were unchanged in apartment markets, but effective rents (shown in the chart) fell 0.5% from the first quarter, as landlords offered greater rent concessions on new lease signings. Apartment rents were 0.6% higher than one year earlier, a sharp slowing from the 2.6% rise through the first quarter. Rents in retail and office property markets edged slightly lower compared to the first quarter, and showed smaller gains over one year ago. Rents in industrial markets continued to rise on a quarterly basis, and were 4.0% higher than a year earlier. 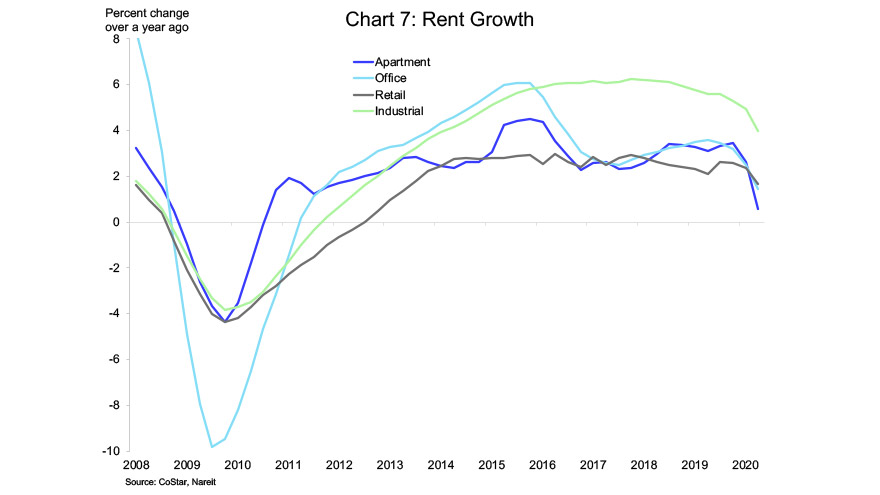