You probably already know that the total returns of exchange-traded U.S. Equity REITs have generally outpaced those of other U.S. stocks over long investment periods: For example, in the longest period measured by the Russell 3000 Index of the broad U.S. stock market—from Dec. 31, 1978, through March 31, 2016—total returns for exchange-traded U.S. Equity REITs have averaged 12.87 percent per year compared to just 11.64 percent per year for stocks. (I measure REITs using the FTSE NAREIT All Equity REITs Index.)

Investors need to know whether that long-term outperformance by REITs is the “normal” state of affairs, or whether it could be only the result of a last-minute run-up in REIT stock values. Actually there hasn’t been any recent run-up in REITs (except during March 2016: +10.17% for REITs, +7.04% for stocks). In fact, during the past three years (March 31, 2013, to March 31, 2016) the Russell 3000 has actually outpaced the Equity REIT market, with total returns averaging 11.15%, compared with 9.85% for REITs.

We can get a better sense of the normal situation by comparing returns over various long investment horizons. The chart below shows average annual total returns over rolling 10-year return periods, with the first such period going from Dec. 31, 1978, through Dec. 31, 1988, and the last one from March 31, 2006, through March 31, 2016. It turns out that REIT returns outpaced stock returns over exactly half of the available 10-year periods, and stocks outpaced REITs over the other half. But exchange-traded Equity REIT returns were much more dependable than stock returns: REIT returns over 10-year periods usually averaged between +10.0% and +13.3% per year and never fell short of +3.43% per year—even during the 10-year periods that included the liquidity crisis of 2008 to 2009—while stock returns were much more uncertain, usually averaging between +7.9% and +15.0% per year and actually going negative (by as much as -2.72% per year) during 17 periods that included the liquidity crisis.

For the statistical-minded, here’s another way to think about it: The cross-sectional standard deviation of the industry-wide 10-year average returns was just 7.9% for exchange-traded Equity REITs, compared with 16.9% for the Russell 3000. 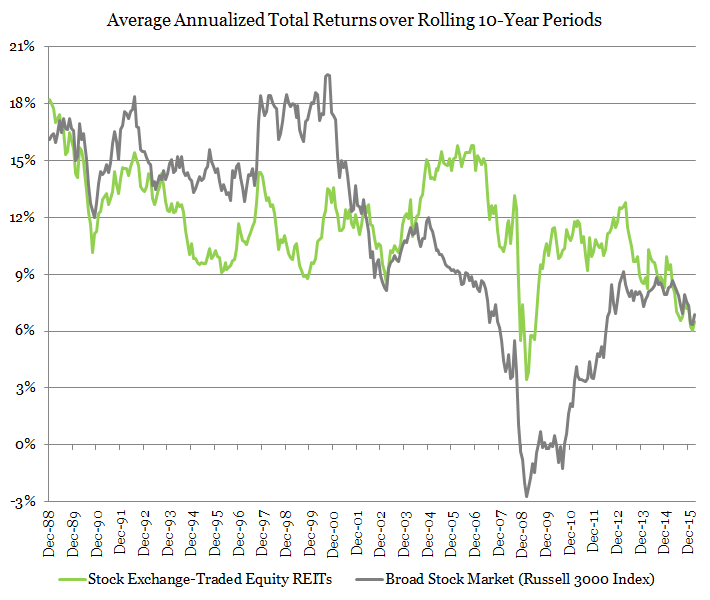 At least as important, REIT returns have exceeded returns in the broad stock market during nearly two-thirds of the available 20-year historical periods, including every single period that started more recently than March 1989—that is, during the “modern REIT era.” In fact, the REIT advantage has been widening. Stocks provided long-term average total returns more than 4% greater than REITs during the earliest 20-year periods shown, while REITs outpaced stocks by close to 3% during the most recent 20-year periods. 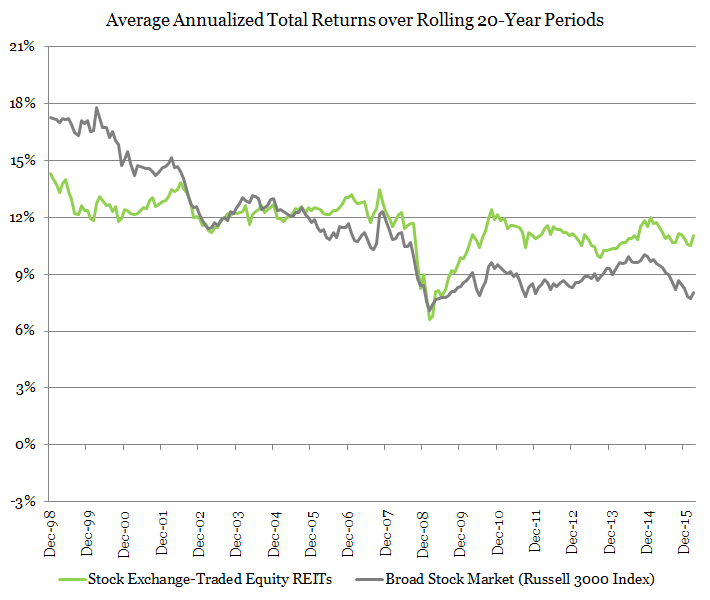 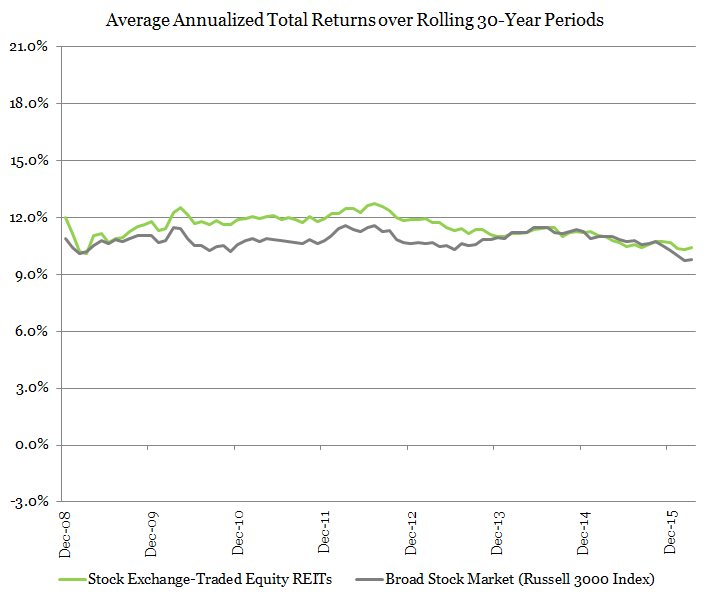 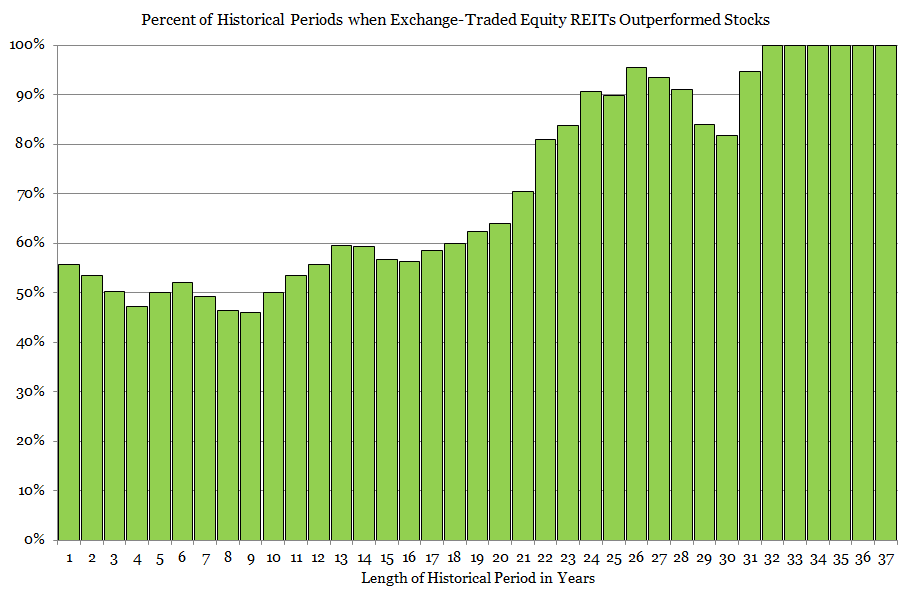 If you’re a day-trader, average returns during long historical periods are irrelevant. Your hope is to be among the few traders accurately timing their moves into and out of individual stocks (or the market). But most of us—from the smallest individual investors building retirement wealth to the largest pension funds, endowments, and foundations building funds to cover benefits, financial aid and charitable activities—are looking to maximize returns in the next 10 years, 20 years, 30 years, or even longer. For those of us with long horizons, exchange-traded Equity REITs have proven themselves over and over again.