Comparing Listed REITs with Private Equity Real Estate: What the Cambridge Associates Data Have to Say

Cambridge Associates recently published the latest update of their “Real Estate Index and Selected Benchmark Statistics” summarizing private equity real estate fund performance through 2017Q1.  Both their data and their analysis are terrific, but I had never before realized just how stunning their conclusions are: Cambridge Associates (C|A) reports that private equity real estate funds have underperformed listed equity REITs by 3.91 percentage points per year over the past 25 years.

To put that into perspective, imagine you had a million dollars 25 years ago and you were deciding whether to invest it in the private equity funds that make up the C|A benchmark or in the stocks that make up the FTSE NAREIT All Equity REIT Index.  If you had put it into private equity funds (and reinvested the net total returns) it would have grown to $5.6 million today, but if you had put it into listed equity REITs instead it would have grown to $13.8 million—nearly 2½ times as much!

C|A uses a “modified public market equivalent” (mPME) methodology, which is widely regarded as the only method that has yet been developed for making a good comparison between assets traded in liquid markets and similar assets that are not traded in liquid markets.  They compare returns over several historical periods, as shown in Chart 1, where the shorter periods are shaded because C|A cautions that “performance metrics from [funds less than six years old] may be less meaningful.” 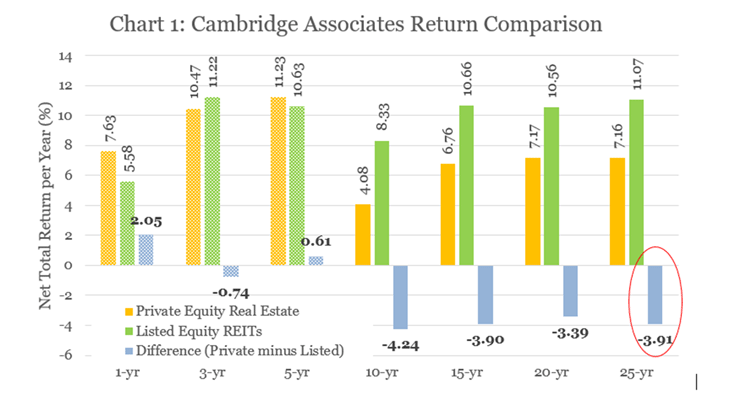 The C|A reports are “based on data compiled from 942 real estate funds (including opportunistic and value-added real estate funds), including fully liquidated partnerships, formed between 1986 and 2016.”  They focus on net returns received by limited partners, and returns are measured at the fund level rather than at the property level.  That’s relevant because opportunistic and value-added funds typically use dramatically greater leverage than listfed equity REITs, so lower fund-level returns must mean much lower property returns (plus higher expenses).

The now-defunct NCREIF/Townsend Fund Indices reported that average leverage for the funds in its sample during the available period 2007Q4-2013Q3 was usually between 51% and 56% for value-add funds and between 53% and 64% for opportunistic funds—but over the same period it was usually between only 36% and 47% for equity REITs.  C|A doesn’t report average leverage for the funds in their benchmark, but they do report that “in terms of limited partners’ total paid-in capital, the C|A Real Estate benchmark is 71% Opportunistic and 29% Value-Added.”

So if private equity funds were using substantially greater leverage (as the available data suggest) but producing substantially lower returns at the fund level (as C|A reports) then they must have been producing even lower returns at the property level on top of their higher fees.  Moreover, investors in private equity funds got hit not just by much lower returns, but also by much higher risk at the same time.  The use of leverage increases volatility, relative to an unlevered investment, according to a simple mathematical formula:

On top of that, investors in private equity funds suffered pretty substantial additional risks because their investments were illiquid, meaning they couldn’t redeem shares at any price if they needed the cash.  (Remember the payroll crisis that Harvard needed to get bailed out of because its endowment was so illiquid?)  Academic researchers have estimated that investors need to get returns that are higher by something like 3% to 6% per year to compensate them for the risks of illiquidity—yet Cambridge Associates says they were getting returns that were lower by something like 4% per year.

There have been more than a dozen academic studies comparing the performance of listed and private equity real estate using different data sources, time periods, and methodologies, and all of them—every single one—has reached the same conclusion as Cambridge Associates: they all found better average performance on the REIT side, even after controlling for differences in the use of leverage, the mix of property types, and the geographic distribution of properties.

While the merits of that argument are questionable (to say the least), the Cambridge Associates report enables us to do exactly such a comparison across several performance measures that are commonly used in the private equity world: internal rate of return (IRR), total value to paid-in capital (TVPI), and distributions to paid-in capital (DPI).  It’s worth noting the problems with these metrics for evaluating performance: as Phalippou [2009] noted, for example, “IRR is probably the worst performance metric one may use in an investment context.  It exaggerates the variation across funds, exaggerates the performance of the best funds, can be readily inflated and provides perverse incentives to fund managers.”  But the numbers are striking enough to be informative anyway:

In other words, during six of the 17 vintage years 1994-2010, even those real estate investors who correctly predicted which private equity investment managers would perform the best in their industry (and assumed much higher risks from both leverage and illiquidity) still did worse, according to at least one commonly used performance metric, than they would have if they had gotten nothing better than the average performance of equity REITs listed on stock exchanges—and during another two vintage years the outperformance by top-quartile PERE funds relative to the average for REITs was quite small.

To summarize, what does private equity real estate investing offer?

Given C|A’s analysis, on top of other data that have been publicly available for years, it does seem reasonable to ask: What is it that private equity real estate funds offer?

By the way, if you have any comments or questions, or want my bibliography of academic studies comparing listed and private real estate, drop me a note at bcase@nareit.com.