The business closures and social distancing designed to slow the spread of COVID-19 did not take affect until the final few weeks of the first quarter, but they had a significant impact on demand for commercial real estate, vacancies and rent growth across the major property sectors. 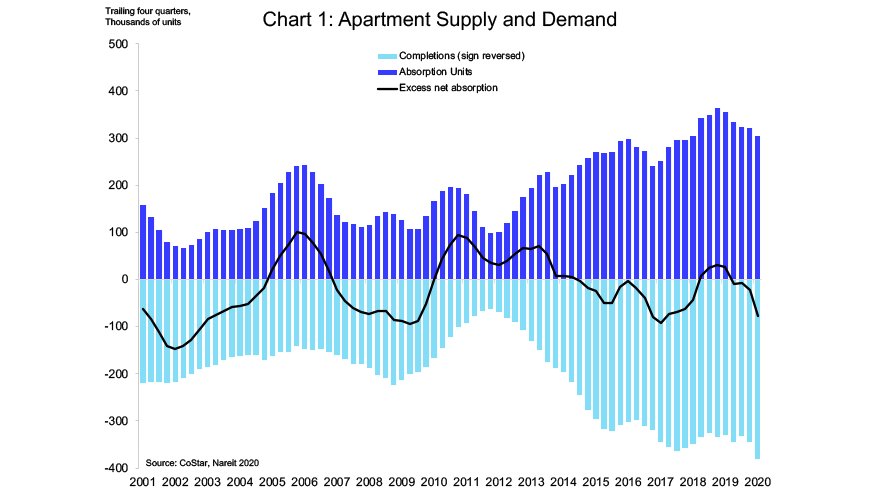 Newly-released data from CoStar show that net absorption of apartments was 65,000 units in the first quarter, the weakest start to a year since 2014 (chart 1 shows four-quarter sums due to seasonal patterns in demand, in dark blue bars. Completions, or new supply, are shown with the sign reversed in the light blue bars). There has been a high level of construction of new apartments, which leaves this sector particularly exposed to slowing demand. 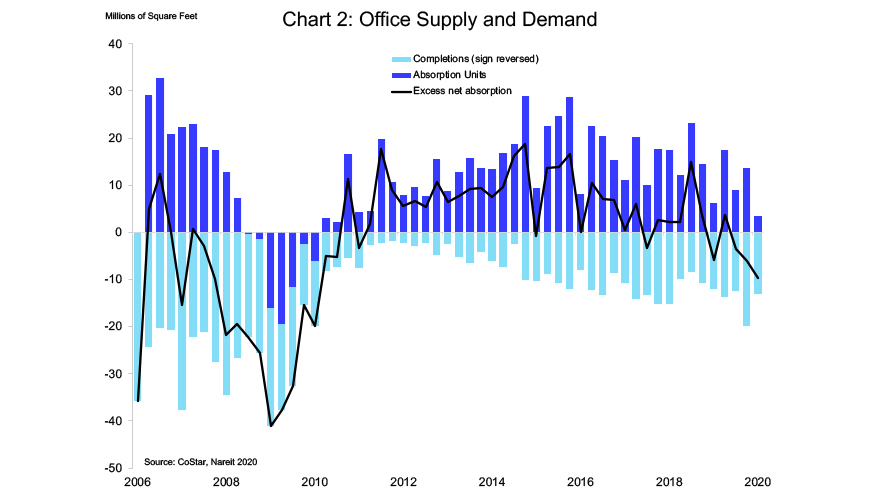 Demand also weakened in the office market, with net absorption of 3.5 million square feet, the lowest since 2010 (chart 2, with quarterly data). Despite a modest amount of new construction, excess net absorption (the difference between net absorption and completions) moved sharply into negative territory. 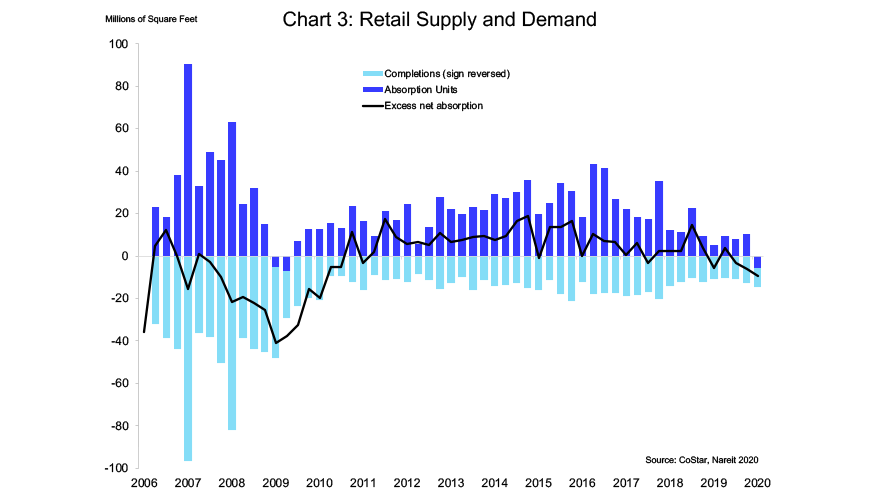 The retail property sector experienced an even more sharp slowing of demand that resulted in negative net absorption, as the total amount of leased space declined in the first quarter for the first time since 2009. There has been very little new construction of retail space in recent years, which may help limit the effects of weakening demand. 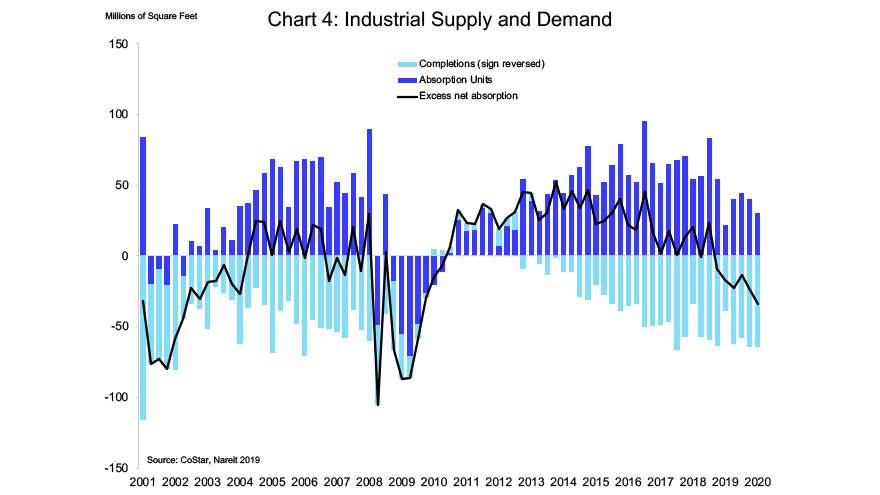 Even the industrial sector, which has had robust increases in recent years due to the need for logistics facilities to transport goods purchased on the internet, saw a softening of demand. Net absorption had slowed even ahead of the COVID crisis, leading to some softening of this sector. 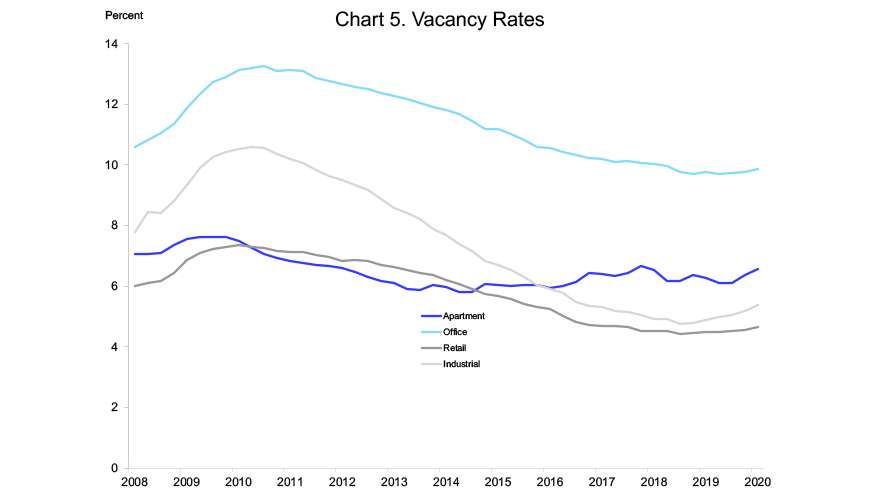 Vacancy rates moved higher across all the major property types in the first quarter. The increases were most pronounced among apartment markets and industrial properties, which each rose 20 bps. Vacancy rates in office and retail markets edged 10 bps higher. 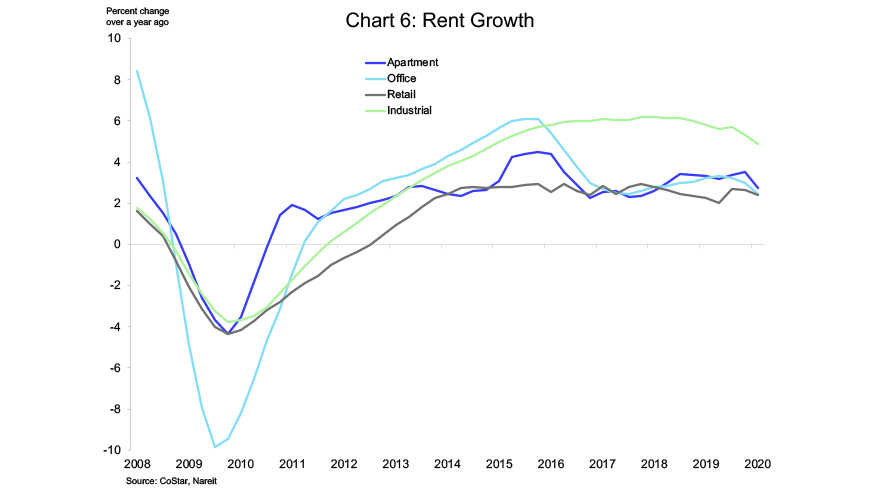 Rent growth decelerated across the board, with the markets that had had the fastest rent growth through 2019 experiencing the greatest slowing. Industrial and apartment markets had rent growth of 5.35% and 3.50%, respectively, in 2019:Q4 compared to four quarters prior. Industrial rents slowed to 4.90%, which is still relatively strong growth, even after the 45 bps of deceleration. Apartment rent growth slowed somewhat more sharply, to 2.75%, or three-quarters of a percentage point slower than rent growth through the fourth quarter of 2019. Office and retail rents also slowed as well.

The changes in the first quarter compared to the fourth quarter of 2019 are not by themselves too alarming. Vacancy rates remain near the recent lows, and rent growth was positive on both a sequential and four-quarter change basis for each property type. The fact that these abrupt changes in market conditions, which occurred due to social distancing and business restrictions that took place only in the closing weeks of the quarter, were manifest in the full quarter numbers warns, however, that the outlook for demand for commercial real estate, vacancies and rents in the second quarter could deteriorate much more rapidly.