The recovery in commercial real estate markets accelerated throughout 2021, especially in the final months of the year. Total transactions volumes in 2021 were $1.9 trillion, an increase of nearly 80% from the prior year, according to data from Real Capital Analytics posted on Bloomberg. Some of these sales may represent a catch-up from deals that had been put on ice earlier in the pandemic, when sales fell more than 30% in 2020 from the year before. Even so, sales last year were nearly 25% higher than the pre-pandemic pace in 2019, indicating strong underlying demand for commercial properties. 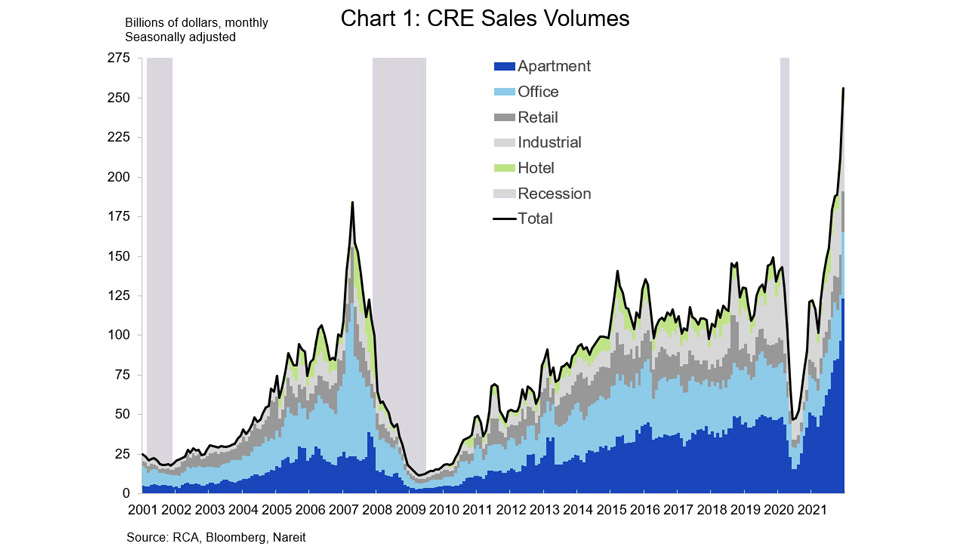 The monthly sales, adjusted for normal seasonal variation, indicate that sales accelerated rapidly as the year progressed. Sales of apartment buildings, shown in the blue bars in Chart 1, in December 2021 were 2-1/2 times the sales volume in December 2019. Sales of industrial properties (in light grey) were nearly double the amount of two years earlier, and sales of retail properties (dark grey) were up 70% over this period. 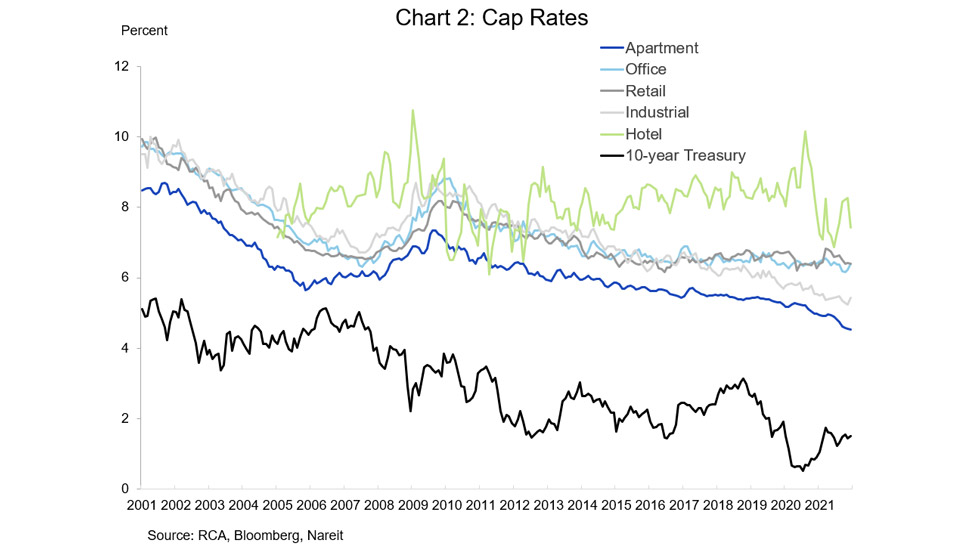 This surge in demand has resulted in a steady decline in cap rates. Apartment cap rates touched a new low of 4.5% in December 2021, 70 bps lower than in December 2019. Cap rates of other property types moved lower as well, but by lesser amounts. Low cap rates are consistent with a low-yield, low-interest rate environment in all markets. In particular, interest rates on the 10-year Treasury note reached a low of 0.51% in August, 2020, compared to rates above 3.0% in 2018. Long-term interest rates have moved moderately higher since then as the economy has rebounded, but still remain near historical lows. 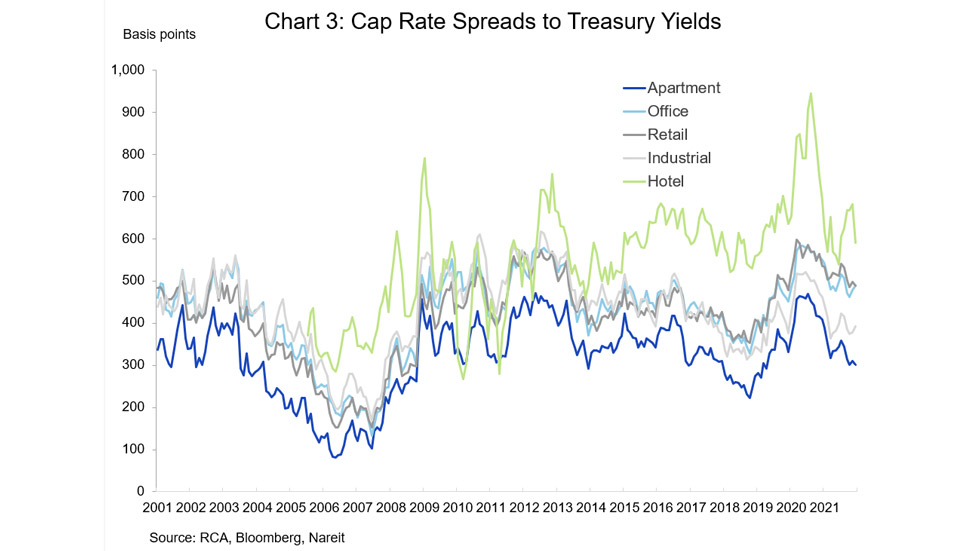 What are the downside risks to commercial property prices of such low cap rates as the Federal Reserve ends its purchases of Treasury securities and embarks on a new round of interest rate increases? Chart 3 examines the spread between cap rates and yields on the 10-year Treasury note. These spreads represent the extra return that investors in commercial real estate receive as compensation for bearing the risks of these investments. A rise in long-term interest rates tends to reduce cap rate spreads, reducing the attractiveness of investments in real estate. The main risk for the real estate market is if cap rate spreads narrow too far, property prices could fall.

Cap rate spreads for all property types are near the middle of the range they have occupied since 2009. They are not especially wide, which would provide an extra cushion for pricing in the event of interest rate increases, but neither are they at the low end of the ranges. For example, in December 2021 the cap rate spread for apartments was 300 bps, or 80 bps wider than the recent low in late 2018.

More significantly for market risk exposures, these spreads are far wider than those prevailing in the years prior to the 2008-2009 financial crisis, when the cap rate spread for apartments dropped as low as 80 bps, and cap rate spreads for office, retail, and industrial properties were all less than 200 bps. Today’s pricing reflects confidence in the underpinnings of the commercial real estate market but not the speculative pricing that had prevailed in the mid-2000s.