First the good news: Commercial property prices were still rising through the first quarter of 2018, according to the CoStar commercial repeat sales index. The overall composite price index in March stood 7.9 percent above one year earlier. This increase represents an acceleration of price gains from those during most of 2017, to the most rapid pace since 2016.

The pattern of gains across different property sectors is about what you might expect, given recent industry news. Values of retail properties rose little over the past year, and are just 1.0 percent above the first quarter of 2017. Industrial properties, however, appreciated by 11.2 percent, extending a string of double-digit gains that began over two years ago. Prices also accelerated in office and multifamily markets, with increases of 7.1 percent and 8.0 percent, respectively, over the past year.

These increases leave the national price indices above pre-recession peaks. Retail properties have shown the smallest gain, once again, but are still some 10 percent above the 2007 high. Office and industrial markets have enjoyed increases of 13 to 30 percent. Over this longer period, it is the multifamily market that stands out, with prices more than 50 percent above the 2007 high. 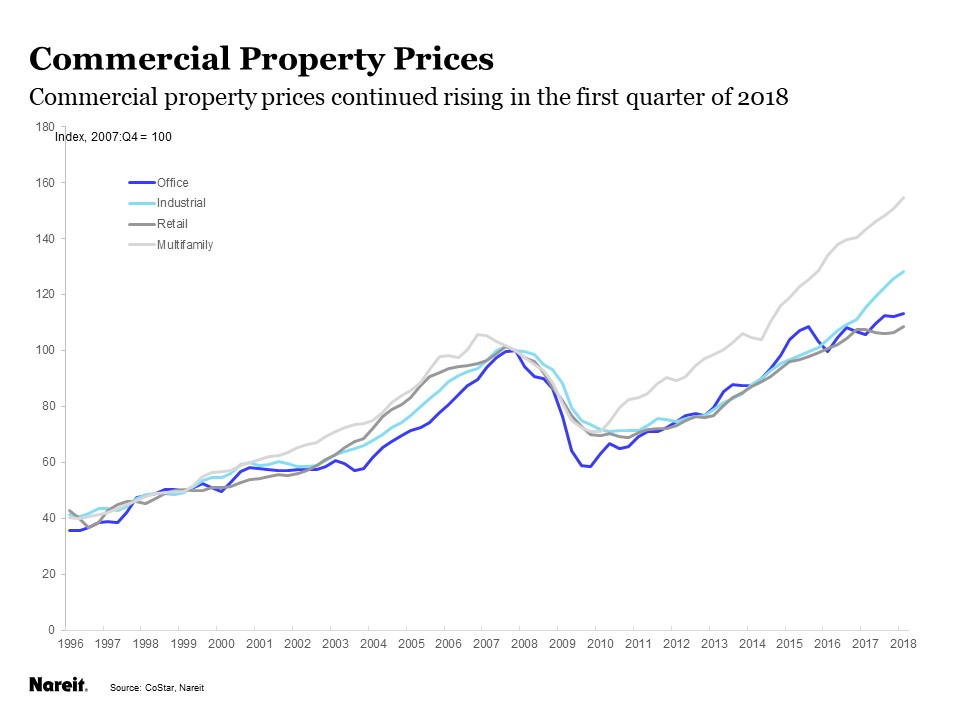 A growing economy has supported the demand for commercial real estate. Indeed, first quarter GDP growth was clocked at 2.3 percent, according to the advance estimate by the Bureau of Economic Analysis, beating the consensus forecast of 2.0 percent growth.

Next, however, are a few worries, two of which stand out. Is the pace of new supply going to cause prices to soften in overbuilt markets, and will rising interest rates damp the demand for properties? We are keeping a close eye on both these issues, but neither currently poses undue cause for alarm. 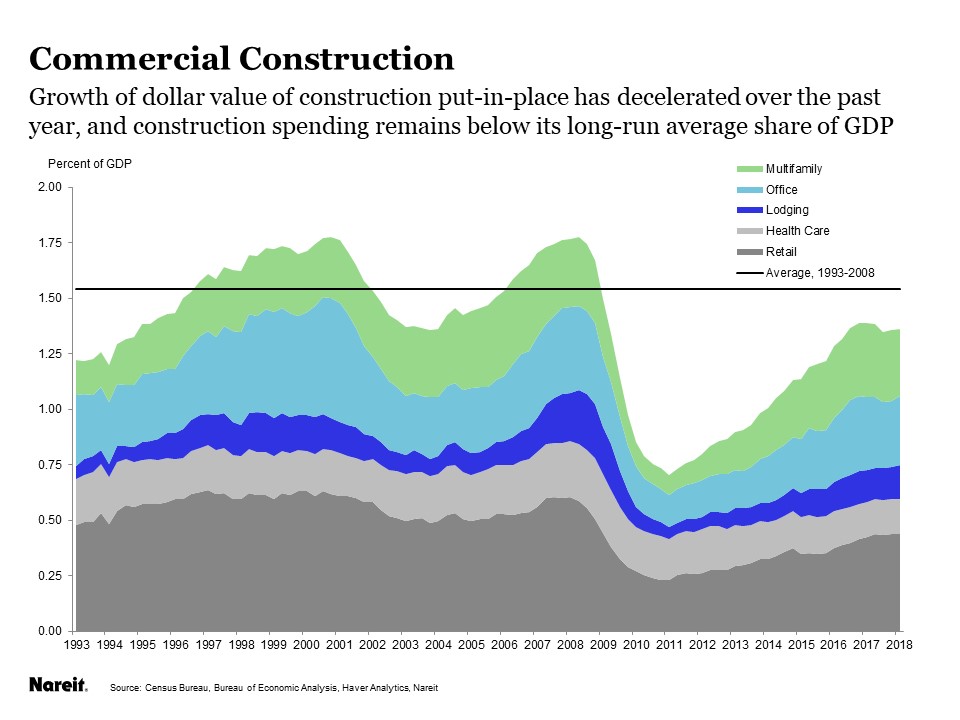 Moreover, construction relative to GDP—which represents the economic activity that generates demand for commercial space—remains below its long-run average. While we hear of pockets of oversupply in certain markets or property types as large projects are completed, these supply waves are generally finding ample demand, and absorption soon catches up to the market.

The recent rise in interest rates, with the yield on the 10-year Treasury note touching 3 percent for the first time since 2014, could potentially affect real estate markets through two main channels. First, higher financing costs could make some deals more difficult to pencil out, leading to a slowing of transactions activity. Indeed, sales have leveled off, according to CoStar, with transactions over the past 12 months little changed from a year earlier. The overall level of sales, however, remains healthy, suggesting that the increases in interest rates to date are not interfering with property sales.