Did You Have the Impression that 2015 Was a Bad Year for REITs? Guess Again.

Anybody could be forgiven for having the impression that 2015 was a bad year for REIT investors.  It was full of headlines about the impending increase in interest rates, and equally full of speculation that the Fed’s action would spell trouble for real estate.  And the truth is that REIT total returns were weak by historical standards: exchange-traded REITs provided total returns averaging just 2.29% during 2015, compared to an average of 9.75% per year since NAREIT began collecting data at the end of 1971.  Equity REITs—which now comprise more than 94% of the total exchange-traded REIT market—did slightly better with total returns averaging 2.83%, but that too was well below their average of 12.00% since the end of 1971.

Look at how other asset categories performed in a generally dismal year, however, and REITs suddenly start looking like the brightest jewel in any investor’s portfolio.  Try these segments of the equity market for comparison: 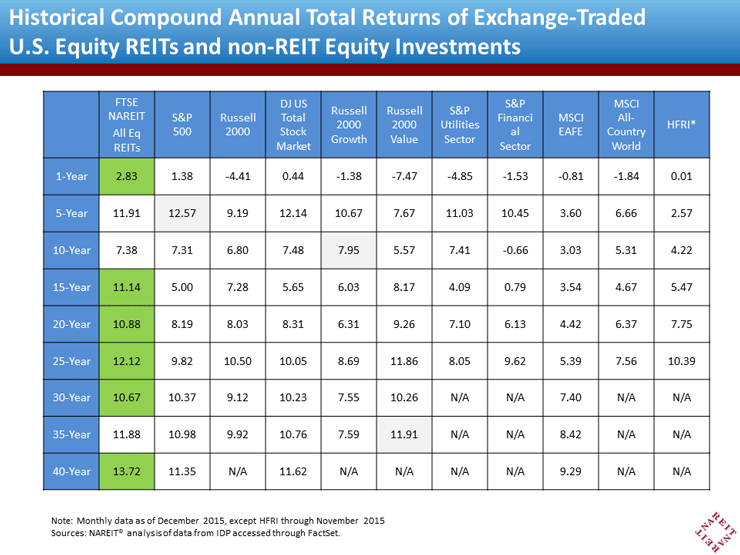 So REITs—especially the market-dominating equity REITs—outperformed during 2015.  Does that surprise you?  It shouldn’t:

You get the idea.  In fact, not a single one of those equity categories outperformed exchange-traded U.S. equity REITs over the past 1-, 15-, 20-, 25-, 30-, or 40-year period.  There’s more: over the past 15-, 20-, and 25-year periods, not a single one of the 10 sectors measured by S&P outperformed equity REITs: not Information Technology, not Health Care, not Telecommunication Services, not any of them.

Will 2016 bring more of the same?  I can’t foresee the future, although macroeconomic fundamentals continue to be very favorable.  But it’s hard to bet against an industry with such a consistent 44-year history of outperformance.