Does the GDP Slowdown in Q4 Reveal Cracks in the Foundation for REITs?

The economy slowed suddenly in 2015:Q4, with real GDP rising only 0.7%, the worst quarterly macroeconomic performance in nearly two years. Recent turbulence in global equity markets has fanned fears that economic growth may continue to disappoint in 2016. Let’s examine the GDP report to see if it reveals any cracks in the economic foundation for REITs. 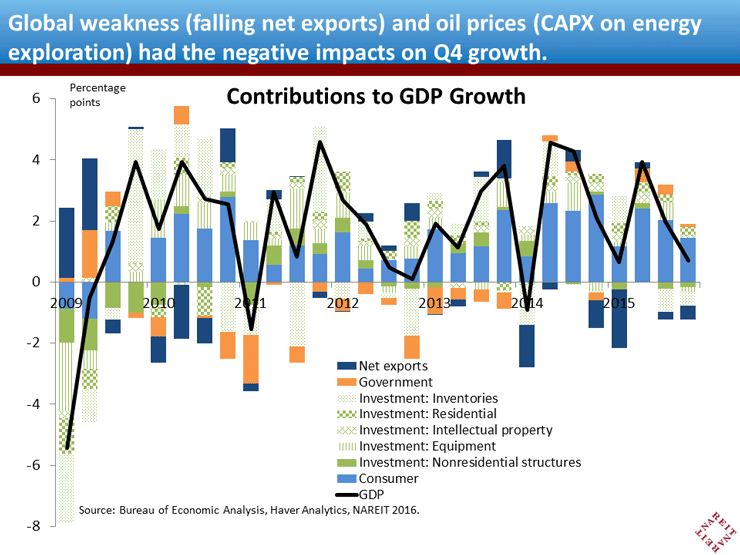 A drop in exports. The combination of a stronger dollar and weak economies in Asia and Europe has taken a toll on U.S. exporters. Net exports subtracted 0.5 %-points from GDP growth in the fourth quarter (dark blue bar in first chart). The struggling export sector has primarily hit U.S. manufacturing industries;

A drawdown of inventories. Business investment in inventories is tied over medium to long time horizons to business sales, but over short periods, it is one of the most volatile components of GDP growth. The inventory drawdown also took a half percentage point off GDP growth in 2015:Q4 (green dotted bars in first chart);

Weak construction of nonresidential structures (NRS). This category gets a bit closer to home for REITs, as most properties owned by the REIT sector (office, retail… in fact, all property types except multifamily) are included in NRS. Construction in this category has declined in three of the past four quarters. The drop-off, however, is entirely in drilling rigs and mining structures, which are used in energy exploration and extraction, and tied to lower oil prices; CAPX in this area is down more than 50%. Commercial buildings, which include properties owned by REITs, continue to expand, albeit at a slightly slower pace. A lower pace of new supply, of course, is likely to be beneficial for real estate owners and investors, including REITs (second chart). 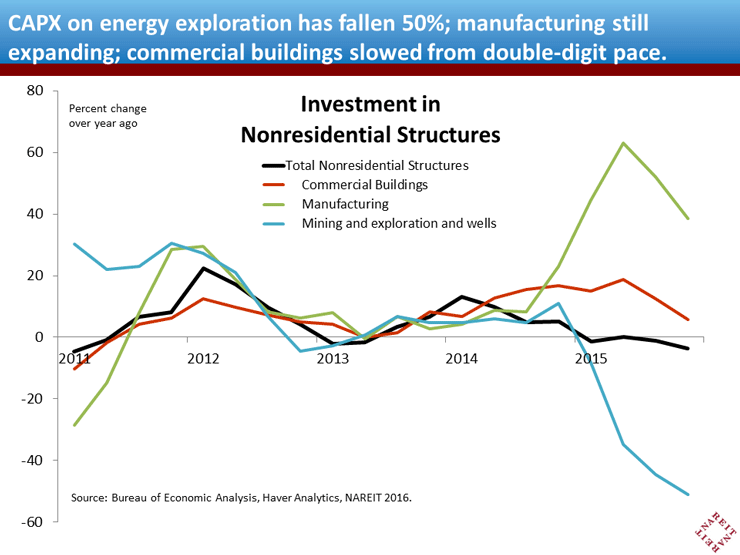 These weak points in the GDP report have little or no bearing on the outlook for REITs (the possible exception is that lower levels of exports may crimp demand for logistics facilities owned by industrial REITs). More important is the sustained growth of consumer spending, which did slow a bit to a 2.2% annual rate, but comes on the heels of a couple of quarters of above-trend growth (light blue bars in first chart).

There’s no mistaking that macroeconomic growth disappointed at the end of last year, and that low oil prices and slow growth abroad may continue to be a headwind for top-line U.S. GDP growth. But these headwinds will fade, and the sectors most important for the economic fundamentals for REITs and commercial real estate remain intact.