Early Warning Signs of Recession? Recent Reports and the Outlook for REITs

There has been a steady stream of negative surprises in recent economic reports: GDP rose a sluggish 0.7% in the fourth quarter, and job growth disappointed in January with an increase of just 151,000, well below recent trends. Compounding the worries about the domestic outlook have been the slowdown in China and ongoing stagnation in Europe. Investors are increasingly concerned about the economic outlook, driving stock prices down 10% or more so far this year.

The outlook for REITs and commercial real estate depends critically on sustained improvements in economic fundamentals. What are the risks that a recession is on the horizon?

One of the simplest, but also most reliable, indicators that the economy may be entering a recession is the level of initial claims for unemployment insurance. Claims spike sharply higher during recessions as firms lay off workers. In recent weeks, however, jobless claims have remained low. 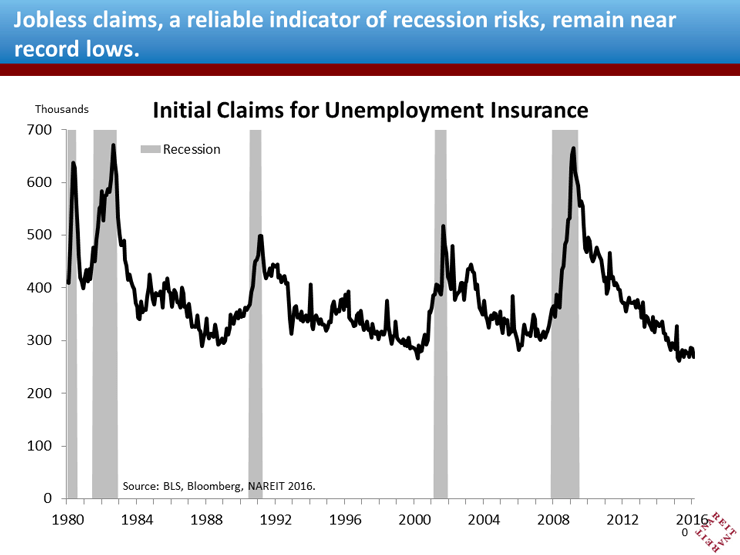 A key advantage of jobless claims as an early warning sign is that they are available nearly immediately, with less than a one week lag before they are reported. Furthermore, the claims report is broadly based, as it covers every worker who is eligible for unemployment insurance, and thus is not subject to many of the sampling and estimation problems that affect other economic indicators.

One caveat, though, is that much of the increase in jobless claims occurs after the economy is already in recession. How much early warning, then, can claims give? As it turns out, quite a bit. Jobless claims usually begin moving up long before a recession begins. In the six month period preceding each of the past four recessions, claims increased by 24,000 to nearly 100,000. Over the past six months, however, jobless claims have continued to decline. 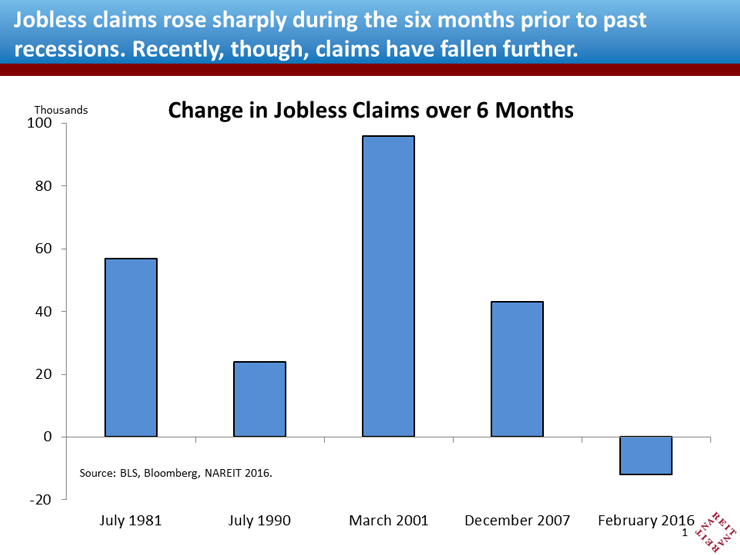 Recent news does raise concerns about the path ahead. So far, though, the readings on jobless claims suggest the economy is in a rocky period but not heading into recession.