The employment report for November was in line with consensus expectations, with an increase in payroll employment of 146,000, but a moderate downward revision to the October figures. The unemployment edged down a tick, to 7.7 percent.

While this pace of job growth is unexciting, it is considerably better than late summer, when there were widespread worries that weak job growth posed risks of a double-dip recession. Increases in private payrolls over the past five months — the red bars in chart 1 — averaged about 150,000 per month, more than twice the speed we saw last spring. Job growth year-to-date is slightly ahead of 2011. 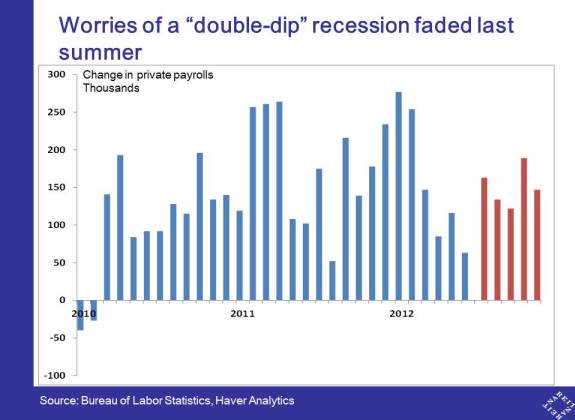 The economy has generated about 5 million new jobs since the end of the recession, and has recovered about half the total job losses during 2008 and 2009. There are other signs of improvement, however, including a 1.2 million decline in the number of people who are working part-time for economic reasons. That is, over a million people who previously wanted full-time work but could only find part-time jobs are now working a full workweek. The number of people working part-time is still very high, but it is headed in the right direction.

Temp workers are giving another positive sign for future job growth. While many workers in temporary positions would prefer a permanent job, employers often turn to temps while they are searching for a full-time employee, or if they are waiting to see if an upturn in sales appears sustainable. The number of temp workers has been growing a fairly steady 20,000 or more per month since 2010, a relatively high level compared to trends over the past decade, which signals continued increases in permanent jobs ahead (chart 2). 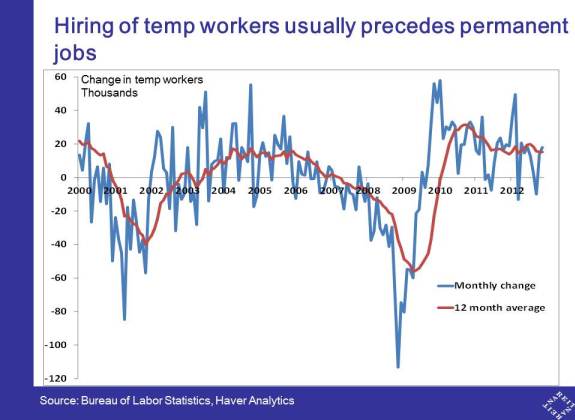 The outlook for commercial real estate markets depends on two main macroeconomic factors. First, the overall rate of GDP growth, and the increases in office employment, consumer spending and household incomes that accompany stronger GDP growth. The latest jobs numbers suggest that the improvements may be slow and gradual, but are progress nonetheless and likely to gain momentum in 2013.

Second, the supply of new commercial construction remains a little above 20-year lows (chart 3). Developers cancelled or postponed many projects during the recession. Activity has been slow to pick up due to concerns about the durability of the economic recovery and tight financing conditions. With so little new supply in the pipeline, the stronger GDP growth we anticipate should translate into rising occupancy, rents and prices of commercial properties. 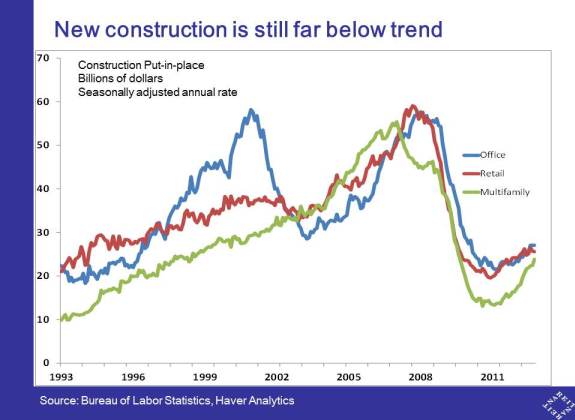 For more details on recent economic numbers and the outlook for commercial real estate, see the REIT.com video.