Enjoy Some Steady Income with Your Price Appreciation

When any asset generates income, there are two things that can happen: the income can be distributed, or it can be retained. If the income is distributed, then the investor has the original asset plus the income, which can be reinvested by the investor; if the income is retained, then the investor still has the original asset plus the income—but in this case the value of the asset goes up by the amount of the retained income, which can be reinvested by the manager. For a tax-exempt or tax-deferred investment, it should not matter whether your return comes from price appreciation or income--theoretically. But the real world isn’t theoretical, so here’s a piece of information that you can use to increase your wealth: it turns out that investments have tended to produce greater total returns when income gets distributed to investors, rather than retained by the asset managers.

Comparing REITs with the broad stock market provides a perfect illustration of the dangers of focusing too much on price appreciation. Graph 1 traces out the growth of an initial investment in REITs (the FTSE Nareit All Equity REIT Index) made at the end of 1989, roughly the beginning of the “modern REIT era.” The initial investment is one dollar, shown as the dark blue band at the bottom; the medium blue wedge is distributed income, while the light blue at the top is price appreciation. (As is normal, we assume that distributed income is reinvested.) By the end of October 2017, the initial one dollar would have grown to more than $17—with $7.84 of the increase (49 percent) coming from distributed income and the other $8.21 (51 percent) coming from price appreciation. Total return averaged 10.73 percent per year with the income return averaging 5.24 percent per year and the price return averaging 5.49 percent per year. 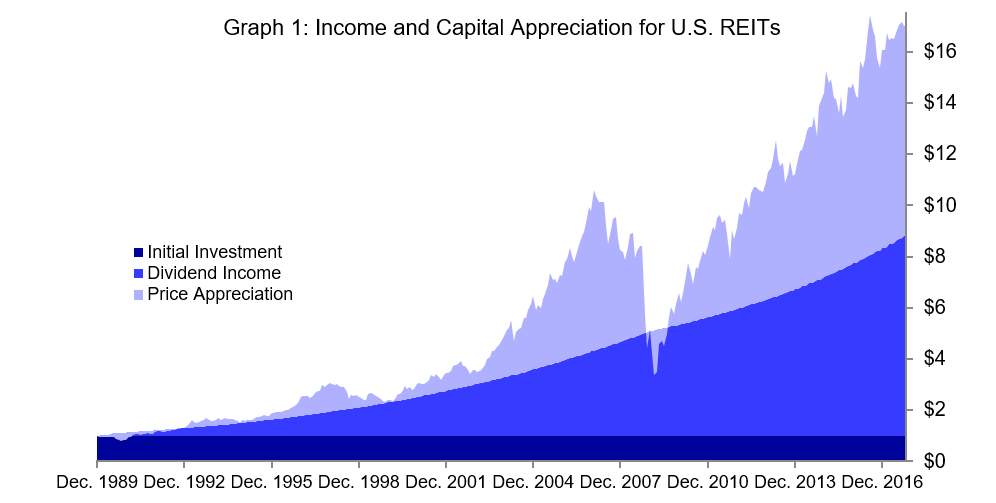 Now compare that with the performance of the broad stock market (Russell 3000) over the same period, as shown in Graph 2. The vertical scale is the same, so the difference in performance is obvious: by the end of October 2017 the same initial investment of one dollar would have grown to just $13.59. Price appreciation would have amounted to $10.02, or 22 percent more than the REIT investment, but it’s not hard to see why: non-REIT companies simply haven’t distributed very much income, so what they kept had the effect of boosting their stock prices. Cumulative income would have amounted to a paltry $2.57, or 67 percent less than the income distributed by REITs. 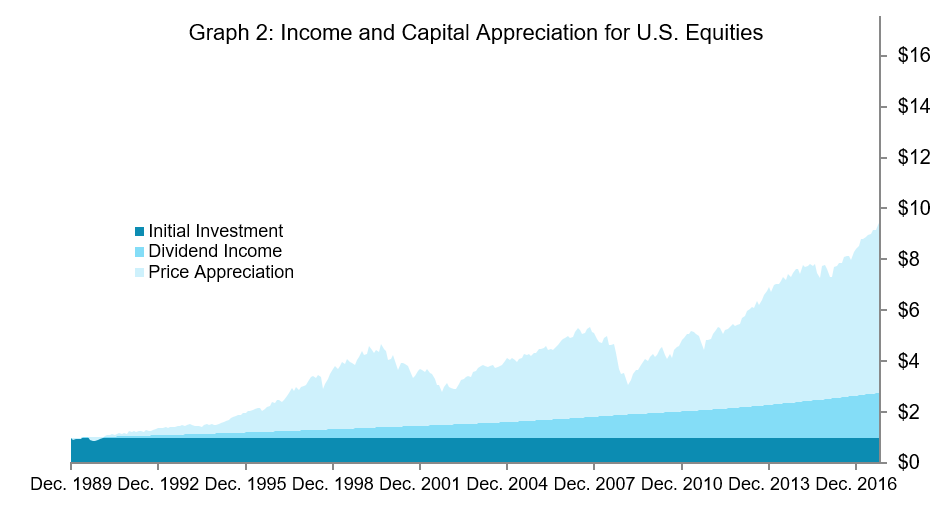 Before going on, let’s let “the magic of compounding” sink in. Total returns for the broad stock market averaged a respectable 9.83 percent per year—in other words, that period of nearly 28 years was not a weak one for stock performance. Total returns for REITs were better by less than one percentage point per year, 10.73 percent per year vs 9.83 percent per year. (That difference is much less, for example, than the annual cost of hedge funds, or venture capital, or buyouts, or private real estate.) In less than 28 years, though, the value of the REIT investment would have grown to be 25 percent greater than the value of the stock investment ($17.05 vs $13.59). That’s what even modest outperformance can accomplish for a long-term investor.

Back in 1986 Michael Jensen published one of the most influential academic studies about corporate management, “Agency Costs of Free Cash Flow, Corporate Finance, and Takeovers,” which at last count had been cited in other academic papers nearly 25,000 times. Jensen’s thesis was simple: corporate executives tend to waste available cash on poor investments and their own perks, so total returns will tend to be maximized if they can be forced “to disgorge the cash rather than investing it at below the cost of capital or wasting it on organization inefficiencies.”

Now consider the requirements that every REIT must fulfill: among other REIT regulations, they must “disgorge” at least 90 percent of their taxable income, and typically they distribute a full 100 percent. Jensen’s research suggests that they would like to waste that cash on poor investments or “organization inefficiencies” (academese for “perks”). You and I can debate whether REIT executives would actually like to waste their free cash—but the fact is that they don’t have much chance to do so. Non-REIT executives, though, do.

Near the end of the summer I published a market commentary entitled “ Income and Capital Appreciation from Real Estate Investing: The Participation Trophy and the Performance Record ,” in which I pointed out that private equity real estate funds on average have produced a 25-year record of dismal performance: net income that seems to fall in the range of 4 percent to 5¼ percent per year no matter who’s in charge (that’s the “participation trophy”) along with price appreciation that ranged from just 1.04 percent per year (high-cost, high-risk supposedly “value-add” funds) to 4.16 percent per year (high-cost, high-risk supposedly “opportunistic” funds) for private equity real estate while (low-cost, lower-risk) REITs were producing price appreciation averaging 5.87 percent per year.

How was it possible for private equity real estate investment managers to produce such anemic price appreciation on average over such a long period? Well, Jensen’s “free cash flow” problem may be an important part of the answer: the business model for private equity funds is to amass a huge pile of “free cash,” and then give managers an unfettered chance to fritter it away by “investing it at below the cost of capital or wasting it on organization inefficiencies.”

Of course non-REIT companies traded in the stock market haven’t performed as terribly as private equity real estate fund managers, but Jensen’s free cash flow problem may be partly responsible for the fact that REITs have outperformed the rest of the stock market for so long. To put it bluntly, companies that “disgorge” income at the rate of 5.24 percent per year just don’t have as much opportunity to waste it, whereas companies that dribble out their income at the rate of just 2.01 percent per year have ample opportunity to fritter it away.

Here’s a simple way to think about the advantage of distributed income. Every dollar that gets paid out to you is a dollar that you can invest in the best way possible—which may, of course, be right back in the same assets through reinvestment, but instead it might be better to divert it to an entirely different asset. You, the investor, always have the option to put your distributed income right back to work with the same managers it came from, if that’s the best use for it. On every dollar that does not get paid out to you, though, one thing is absolutely certain: you will never have the option to decide what is the best use of that cash. 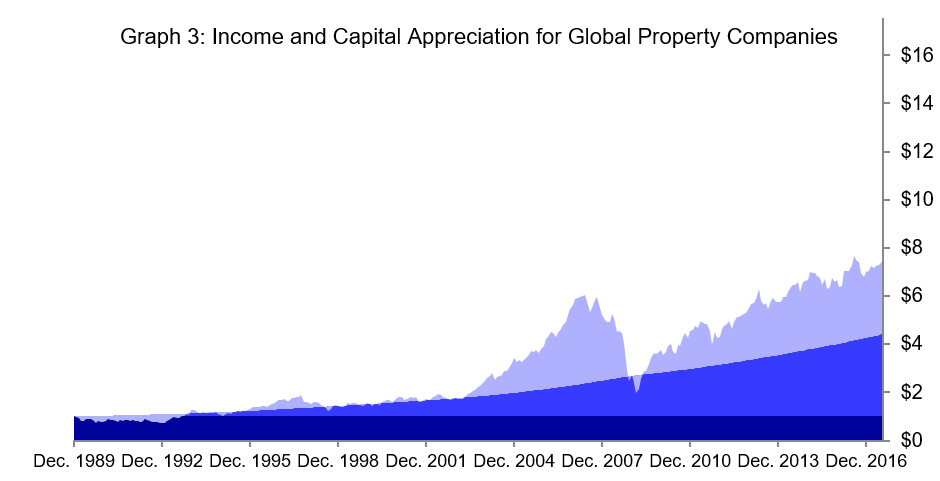 I’m certain there are many reasons other than “the free cash flow problem” that have contributed to explaining why REITs have outperformed both the non-REIT part of the stock market and private equity real estate investment funds over such long periods. For example, it’s my guess that the outperformance can be explained at least in part by the opportunity that REITs have to engage in “public/private arbitrage” by buying property assets when they are relatively undervalued on the private side of the real estate market and selling them when they become relatively overvalued in the private market. REITs very actively engage in public/private arbitrage—made possible because, as data on property purchase and sale transactions make clear, private equity real estate investment funds have exhibited a distressing tendency to take the unfavorable side of property transactions, selling low and buying high. Most non-REIT companies, though, don’t have the same opportunities, year in and year out, to take advantage of the bad trades made by private-sector counterparts.

Other factors are probably at work, too: I believe that transparency, liquidity, and strong corporate governance all help to enforce capital market discipline that encourages REIT executives to avoid making poor investment decisions. But the consistent, strong income that REITs have distributed to their investors, year after year, surely plays an important role.