There's a $2 trillion stimulus fund you haven't heard about, and it’s growing bigger every day.

Consumers cut spending sharply to avoid social contact at the mall or a restaurant, and as shops and businesses close during the lockdown. The aggregate income of all households has fallen with the record job losses. It’s important to keep in mind, though, that a solid majority of employees are still working and earning income.

Total household income didn't fall nearly as much as spending, largely because of those who are still employed, working from home or elsewhere, but who cut back on their purchases. Savings have jumped as a result, with the personal saving rate increasing to 13.1% in March, from 7.7% in January. And savings likely increased further in April and early May.

Where did this money go? It's in the bank--literally. 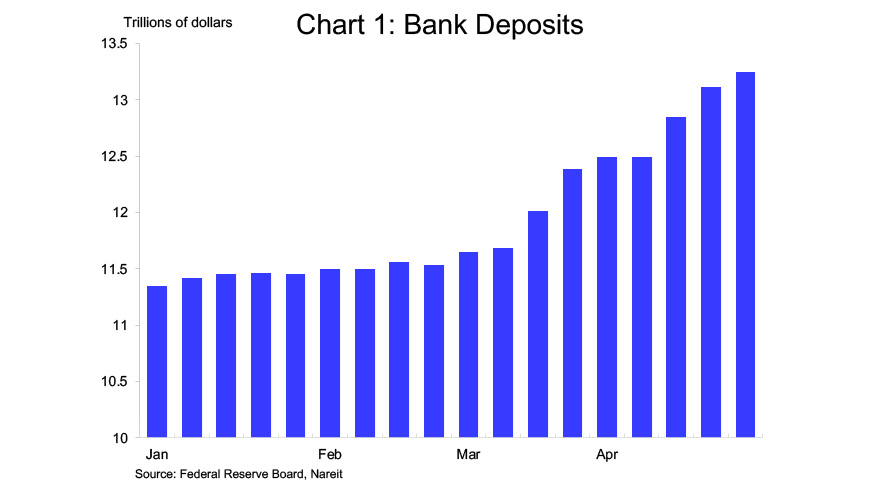 Bank deposits rose $1.7 trillion in March and April, and are rising further every week. This is dry powder for the consumer that rivals the size of the fiscal stimulus programs that Congress has enacted. If recent trends continue, by the time the economy reopens there could be as much as $4 trillion in consumer spending power available to help jump-start the economy. Even if consumers hold on to a share of these savings for future “rainy days”, this spending could be enough to boost GDP by 20% over the next year.

The outlook for REITs and commercial real estate markets depends on most major sectors returning to more normal levels of activity, once the spread of coronavirus is under control. The purchases that households make out of this dry powder can generate revenue for commercial tenants to make their lease payments, as well as hire back employees who were laid off during the shutdown.

The path to such an outcome is not yet clear, and the country still faces major challenges both in terms of stopping the virus and also supporting households and businesses during this period. The “dry powder” that households are accumulating, however, is unprecedented and is likely to help support private spending power that can boost the recovery, and commercial real estate and REITs.