As an asset class, stock exchange-traded equity real estate has provided higher returns than other public equity investments over most significant historical periods. For example, the total returns of the FTSE NAREIT All Equity REITs index have outpaced total returns of the S&P 500 Stock Index over the 15-, 20-, 25-, 30-, 35-, and 40-year periods ending March 31, 2016. We have a more limited history on the performance of Equity REITs by property type, with data available only since the beginning of 1994. As the table below shows, however, the outperformance by exchange-traded Equity REITs has not been limited to just a small set of property types: 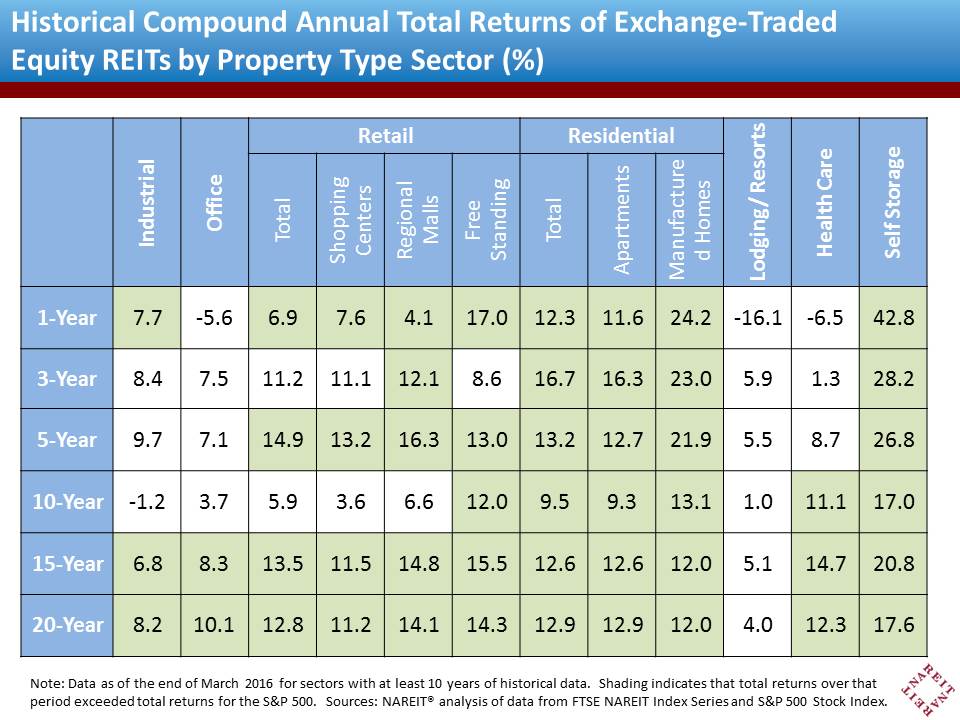 Residential REITs, including both the apartment and manufactured homes subsectors, have outperformed the S&P 500 over every historical period shown: one year (as of March 31), three years, five years, 10 years, 15 years and 20 years. So have self storage REITs, with total returns averaging 17.6 percent in the past 20 years, more than double the 8.0 percent average of the S&P 500. During a time horizon of even just 20 years, that kind of outperformance is powerful: An initial investment of $10,000 at the end of March 1996 would have increased (ignoring fees) to just $46,410 at the end of March 2016 if invested according to the S&P 500, but would have grown more than 10 times to a total balance of $112,741 if invested in residential REITs and would have ballooned more than 25 times to total wealth of $255,687 if invested in self storage REITs.