Historical Real Estate Performance Before, During, and After U.S. Recessions

After experiencing two consecutive quarters of negative growth in the first half of 2022, U.S. real GDP grew by 2.6% in the third quarter this year. Total nonfarm payrolls increased by 261,000 in October; monthly gains have averaged 407,000 jobs thus far in 2022. Implementing its fourth consecutive 75 basis points rate increase, the Federal Open Market Committee set the target range for the federal funds rate at 3.75% to 4.00% this month. As of October 2022, the Bloomberg consensus forecast survey placed the odds of a U.S. recession within the next 12 months at 60%; the likelihood was 50% in the prior month. With mixed economic growth results, waning job gains, increasing interest rates, and rising recession risk, the U.S. economy is in a precarious state.

Economic growth is a key driver of real estate operational and investment performance. With this in mind, some property investors are increasingly concerned about downside risk. They want to know how real estate may fare in a recession. While past performance may not be indicative of future results, a review of historical public and private real estate total returns before, during, and after recessions can be instructive for property investors, and may alleviate some concerns.

An analysis of the last six recessions shows that, on average:

REITs also, on average, outperformed their private market counterparts for the period from four quarters before to four quarters after a recession. 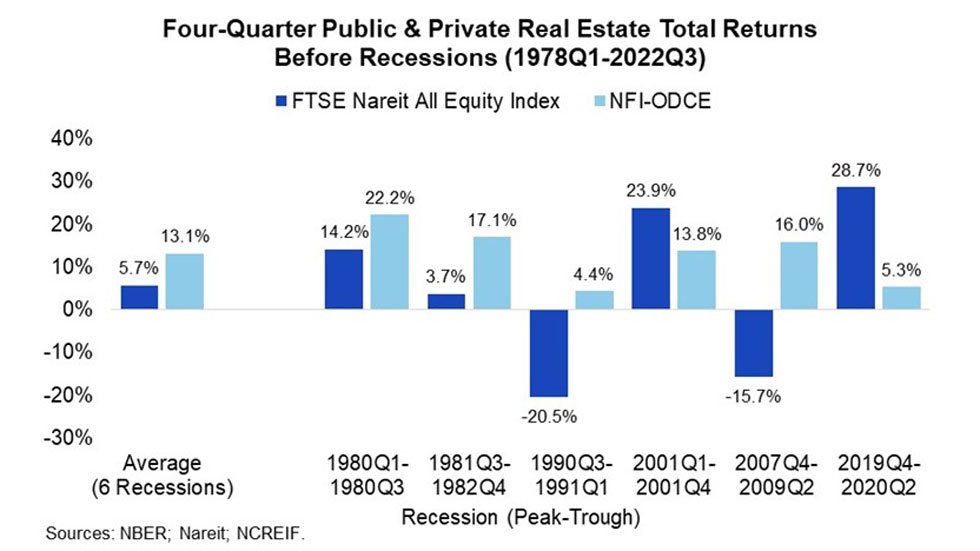 The chart above displays total returns for public and private real estate for the four quarters before a recession. It includes individual measures for each U.S. recession that occurred between the first quarter of 1978 and the third quarter of 2022, as well as averages for the six downturns. Recessions are identified by their peaks and troughs using quarters and years. The FTSE Nareit All Equity Index and the NCREIF Fund Index–Open End Diversified Core Equity (NFI–ODCE) are utilized to measure public and private real estate performance, respectively.

While the U.S. has not entered a recession, the current economic climate is creating headwinds for future property performance. Across the last six recessions, REITs, on average, have underperformed private real estate over the four quarters prior to a recession. The average four-quarter FTSE Nareit All Equity Index total return was 5.7%; and it was 13.1% for the NFI–ODCE.

With REIT performance typically leading private real estate performance by 6 to 18 months, this underperformance may not be surprising. Year-to-date total returns show that REITs are down, while private real estate has not yet posted any aggregate declines. Given the lead-lag relationship, this divergence is a source of trepidation for some property investors. 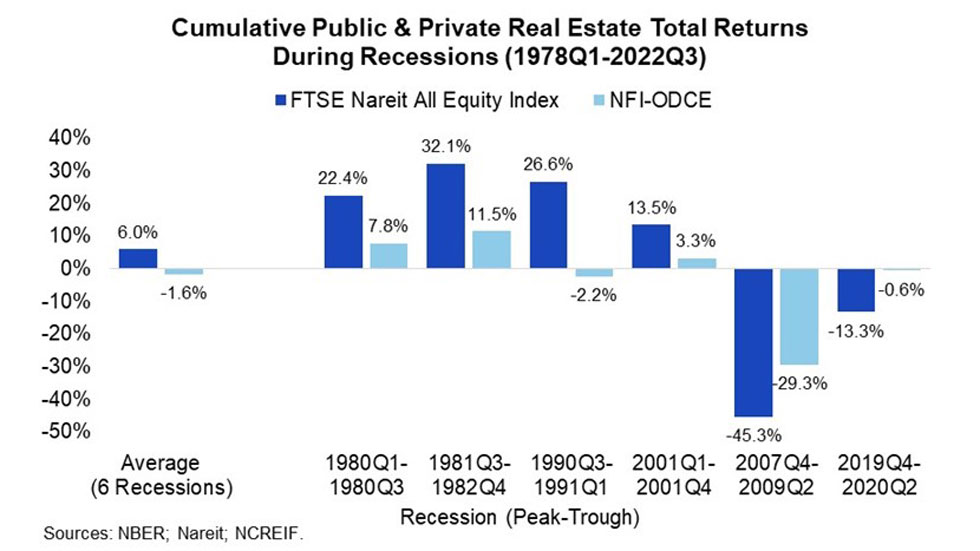 Historically, average annual real estate total returns have tended to be higher in stronger economic climates. Recessions, however, do not have to equate to negative real estate performance. Public real estate posted positive cumulative total returns for four of the last six recessions; private real estate had positive gains in three of the downturns. REITs outperformed private equity real estate on four occasions. REITs’ stronger showings were likely due, at least in part, to performance adjustments that occurred prior to the recessionary periods. 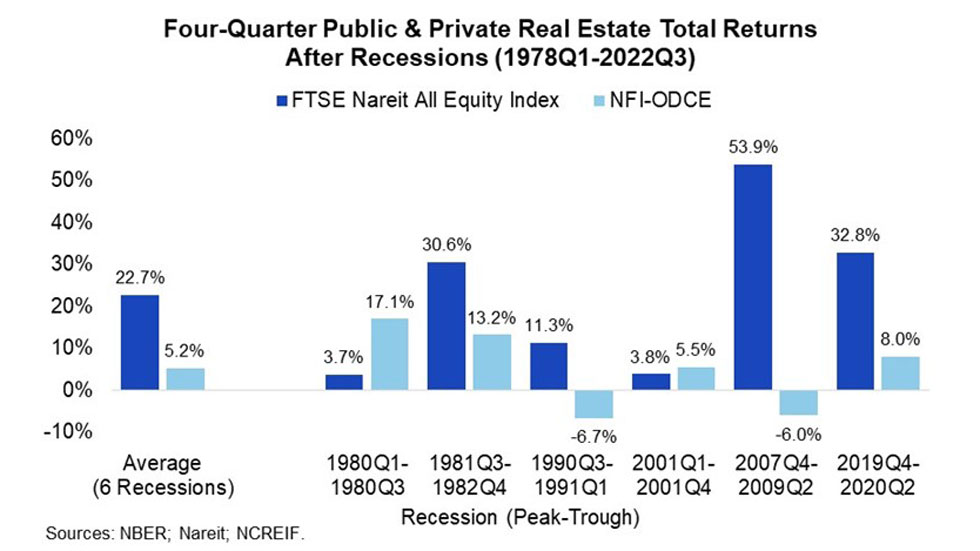 The chart above presents total returns for REITs and private real estate for the four quarters after a U.S. recession. Traditionally, REITs have been well-positioned to take advantage of economic recoveries. The average outperformance of REITs relative to private equity real estate during recessions from the first quarter of 1978 to the third quarter of 2022 continued into the four quarters after the recessions. Average post-recession, four-quarter total returns for the FTSE Nareit All Equity Index and the NFI–ODCE were 22.7% and 5.2%, respectively. Public real estate outperformed its private market counterpart in four of the six last recessions with an average spread of 30.0%. In the two instances when REITs underperformed private real estate, the average shortfall was just 7.6%.