How Much are Americans Working from Home?

Evidence is emerging that hybrid or remote work is becoming a permanent feature for many office workers. Data from Google and the Bureau of Labor Statistics (BLS) show that many workers are back to the workplace, however, data from Kastle that looks at office workers only shows that return to the office has plateaued since April 2022.

When taken together, work from home has declined from its peak at the beginning of the pandemic but workers are not back to the office anywhere near previous pre-pandemic levels. During the first week of June 2022, office visits were at 41% of the pre-pandemic baseline in major metro areas, while overall workplace visits were at 76% across the U.S. The pace of return to the office and the ultimate impact on office demand remains one of the most significant uncertainties for the commercial real estate market. 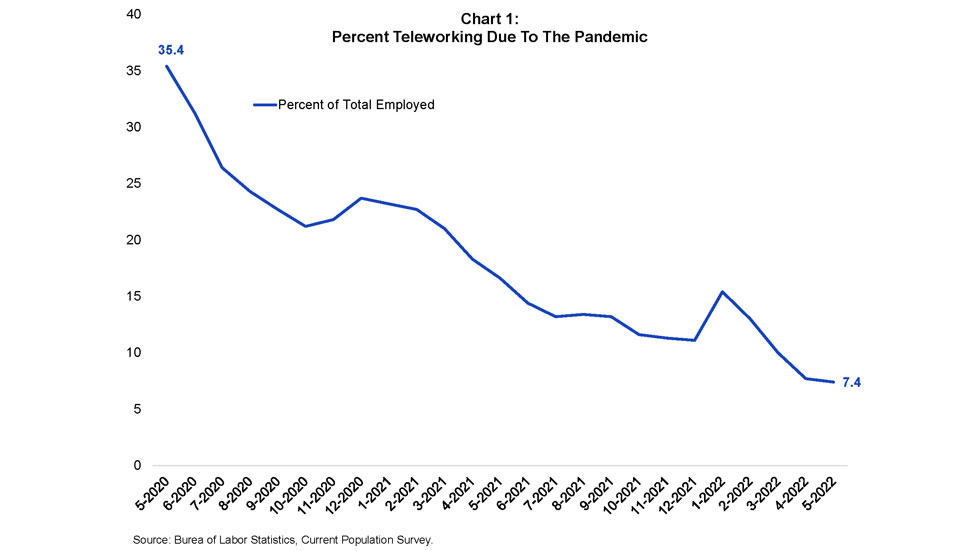 Chart 1 plots the percent of people who reported they were teleworking due to the pandemic on the monthly Bureau of Labor Statistics (BLS) survey. As a percent of total employed people, 35.4% was the peak, when the survey began in May 2020. Two years later, that number has dropped to 7.4%. This number includes anyone who may have worked one day of the past month at home due to the pandemic— a low bar encompassing fully remote workers and those with regular telework days. Of course, for many workers, work from home may not be feasible. 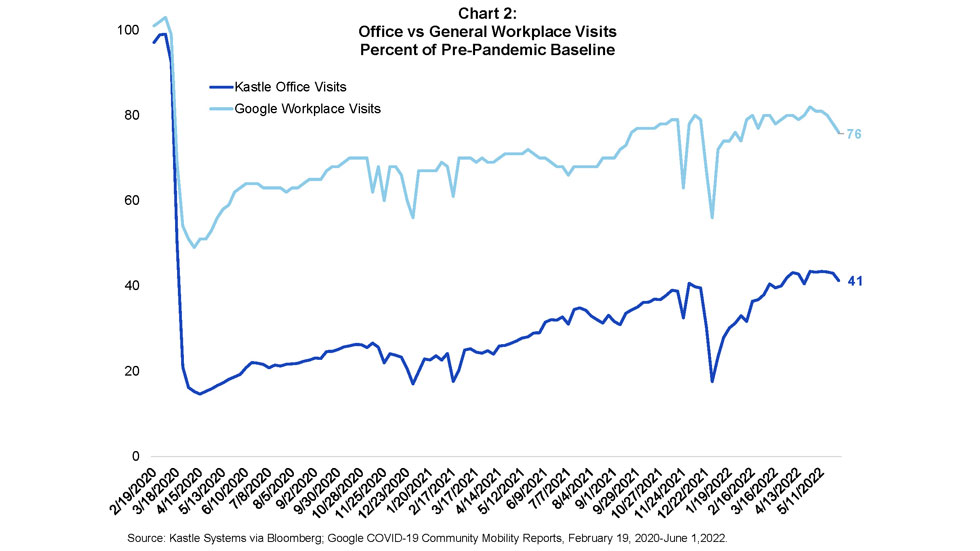 Chart 2 gives some indication of the difference between office workers and the broader workforce. The percent of their respective pre-pandemic baselines is shown for Kastle System’s card swipes by office workers and Google’s visits to their workplace for all types of workers. The two datasets follow substantially the same trend over time with the visits for all worker types consistently exceeding visits for office workers, and accounting for workers who must be in-person to do their jobs. The trough for the Google data is at 49%; almost half of all workers still went to work in the second week of April despite work from home and widespread business closures. In contrast, the trough for Kastle is 15%, showing the greater availability of remote work for office workers.

The post-pandemic peaks for the two series come in 2022 at the end of April for Google, and mid-May for Kastle. The data are not seasonally adjusted and natural variation accounts for holidays and peak vacation times. Workplace visits were at 82% of the pre-pandemic norm for Google at its peak and 43% for Kastle. For comparison, if everyone who had been working in the office for five days returned for two, that would represent 40% of their baseline visits. The BLS estimate of only 7% of workers working from home because of the pandemic does not account for the roughly 20% decline still visible in the Google data because some people who worked from home as part of a permanent hybrid schedule may no longer consider that pandemic related. Considering all three sources, working from home remains popular among office workers, at least some of whom have moved permanently to hybrid or remote work.

The effect of this trend on office demand remains unclear. Fewer visits to the office do not mean companies need less space as long as some workers are in the office some of the time. It remains to be seen how hybrid work will affect the commercial real estate industry in the long-term. Companies that want to lure office workers back onsite may need higher quality office properties with ESG features and more amenities that are typically owned by REITs.