Inflation Protection from REITs: Don’t Jump Out of the Frying Pan Into the Fire

In a recent market commentary I outlined a sensible way to evaluate which assets have been most successful at protecting consumers’ purchasing power when inflation becomes relatively high, as it has done during the first half of 2018. To summarize briefly, Chart 1 (reprinted from the earlier commentary) shows that commodities and REITs have historically provided the most dependable inflation protection with total returns exceeding the inflation rate during 69 percent and 68 percent of high-inflation six-month periods, respectively. (As I explained in my earlier post, I define “high-inflation” as any period when inflation was higher than its long-term median—but I’ve tried several other definitions and the qualitative findings don’t change appreciably.)

If you base your inflation-protection strategy on nothing more than Chart 1, however, you risk making a big mistake. The problem is simple: you have to make your investment decision before you find out whether inflation will turn out to be high or low—and if you guess wrong, you risk putting yourself into the worst possible investment! 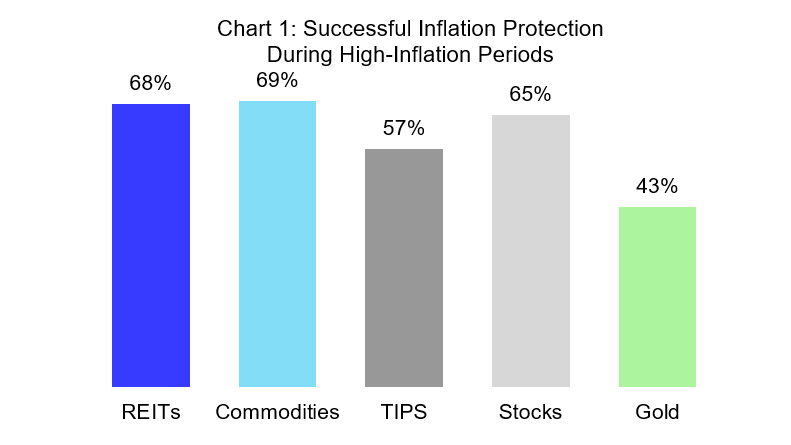 Charts 2 and 3 show what I mean. Chart 2 traces out the returns of each asset during periods when inflation turned out to be relatively high. The highest average returns during high-inflation periods came from investing in commodities, which makes sense because changes in commodity prices form the biggest part of measured inflation. During high-inflation periods since the beginning of 1978, inflation has averaged 5.6 percent per year, so something that cost one dollar in early 1978 would cost about $2.76 now.

Commodities returned an average of 17.5 percent per year during those high-inflation periods, so an initial investment of one dollar that tracked the S&P GSCI would be worth $24.66 today. REITs provided the second-highest returns during high-inflation periods at 13.4 percent per year, so a REIT investment would have grown to $12.31—and just the income alone would have grown by 8.1 percent per year to $4.75. (REITs must distribute at least 90 percent of their taxable income to their shareholders, so dividend income is a particularly large share of total returns for REITs.) 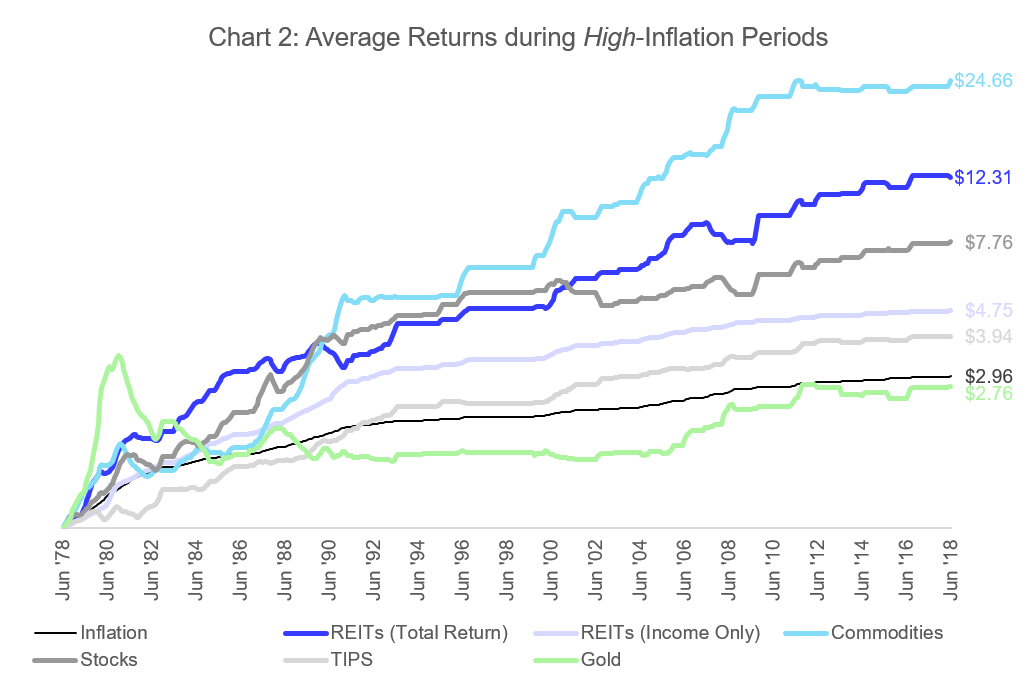 The lesson from Chart 2 is that, if inflation turns out to have been relatively high, you will want to have been invested in commodities. But of course you can’t wait until you find out the inflation rate before you make your investment: you have to guess whether inflation is going to be high or low. Chart 3, which traces out the returns of each asset during periods when inflation turned out to be relatively low, shows what can happen if you guess wrong. Specifically, commodity returns during low-inflation periods have averaged -6.7 percent per year, so if you invested in commodities—but inflation turned out to be low—your initial dollar would have shrunk to just 25 cents at the same time that the cost of goods would have increased to $1.33. In other words, if you move aggressively into commodity investments because you guess that inflation is going to be high, but your guess turns out to be wrong, then you’ve put yourself (or your client) into the worst possible investment! 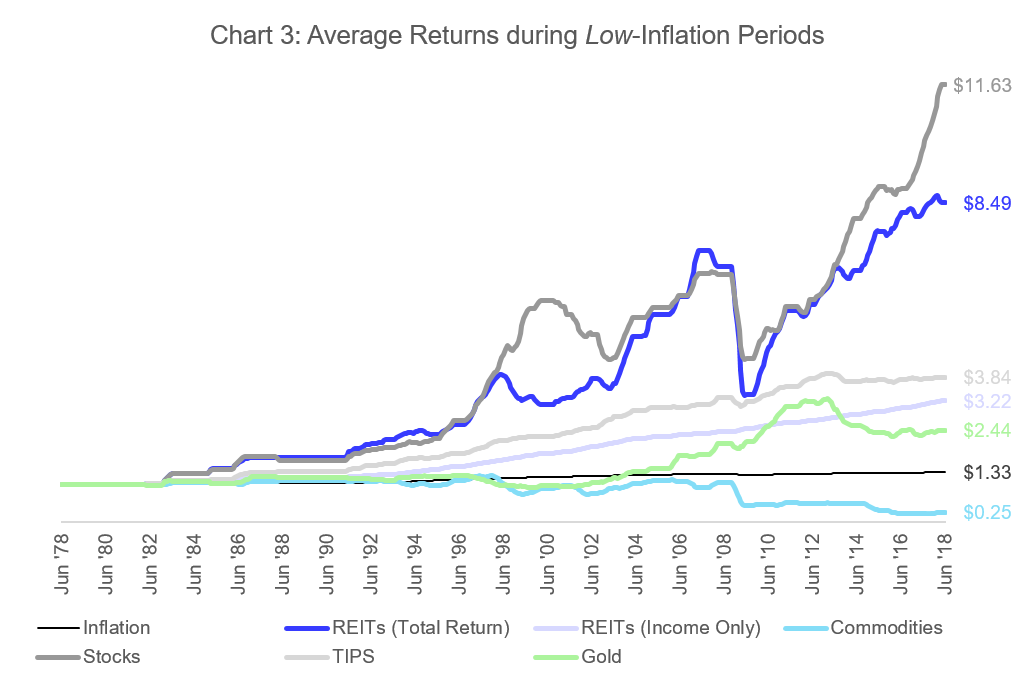 Here’s the take-away from this analysis: you have good reason to worry about inflation, but you need to remember that you also have good reason to worry about guessing wrong. When you’re looking for an asset to protect against loss of purchasing power, don’t choose one that could put you in the poorhouse if inflation doesn’t turn out to be as bad as you expected. Instead, choose an asset that has provided solid inflation protection when inflation turned out to be high, but has still provided solid returns even when inflation turned out to be mild. That’s the role that REITs have played in investment portfolios.

One more thing: I’ve been summarizing the inflation-protecting attributes of these five assets as if you can choose only one of them, but of course that’s not true. In my next market commentary I’ll show you how to construct a basket of assets, each of which provides some inflation protection individually, but that have worked even better when they’re all held in a diversified inflation-protecting portfolio.