Most times the yield curve inverted in the past was because the Fed had raised short term rates to slow the economy and stave off inflation. Past tightening cycles usually increased interest rates by 500 basis points or more, to levels far above the current target. Given that the Fed’s goal was to slow an overheated economy, it’s not surprising that these periods were often followed by a recession.

That’s not a good blueprint for today. The Fed has eased interest rates a bit, and the cumulative interest rate increases to date have been less than half those in past tightening cycles. Monetary policy is not acting as a brake on the economy, as it had during past yield curve inversions; rather, with short term rates in the neighborhood of 2%, Fed policy is close to a neutral rate that neither slows nor accelerates the economy.

The yield curve has also inverted in the past as a weakening economy reduced demand for credit and prompted a “flight to quality” towards safe investments, especially U.S. Treasury securities. Both these effects may be contributing to today’s yield curve moves.

But while economic data show weakening in the global economy, especially Germany and China, there is little evidence of a sharp slowdown in the US. Retail sales have been robust and job growth remains solid, albeit slowing a bit as the stimulus from the tax cuts in 2017 fades further into the past. 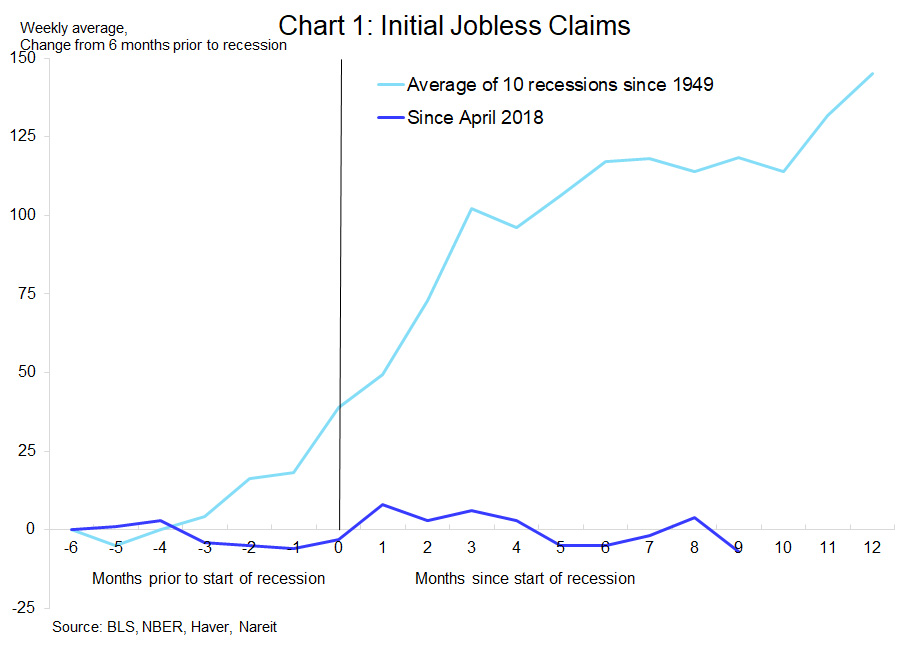 Indeed, initial claims for unemployment insurance, which have been a recession signal at least as reliable as an inverted yield curve, show no such warning signs today. Jobless claims began rising in the weeks and months prior to every recession since the 1940s, and generally were 40,000 to 50,000 higher by the time a recession began. Today’s labor markets show no such signal, as jobless claims have been flat to down slightly over the past year.

What, then, could be affecting the yield curve? One shouldn’t overlook the central bank holdings of trillions of dollars of long term bonds. The Fed and central banks in other countries bought these bonds specifically to lower long term interest rates during the financial crisis, as an additional source of monetary stimulus when short term rates were so close to zero. These holdings are still keeping long rates low, and contribute importantly to the inverted yield curve.

The economic outlook does face some obvious risks from trade wars, but there are also opportunities. The resilience of the domestic economy continues to generate demand for commercial real estate, and low interest rates help create favorable financing conditions. These conditions help create a good market environment for REITs for the months ahead.