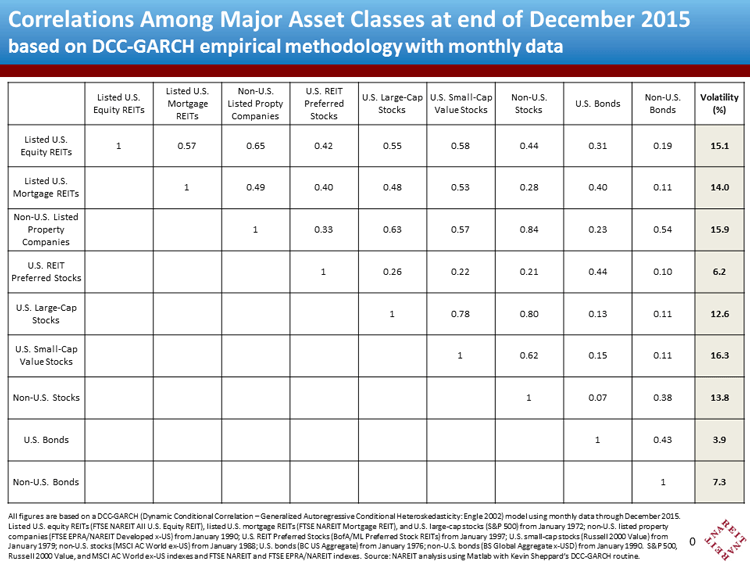 The correlation between exchange-traded U.S. equity REITs and large-cap U.S. stocks was estimated at 0.55 as of the end of 2015, according to NAREIT’s Dynamic Conditional Correlation / Generalized Autoregressive Conditional Heteroskedasticity (DCC-GARCH) methodology.  The method uses data on monthly returns for all asset classes through December 2015, starting as early as January 1972, but computes an estimate of how each correlation changes from month to month rather than a figure for the average correlation covering the entire historical period.  Equity REITs dominate the exchange-traded REIT industry, accounting for more than 94% of aggregate market cap in the U.S. and 100% overseas.

International investing does not seem generally to provide the diversification benefits that many investors expect: for example, the correlation between U.S. large-cap stocks and non-U.S. stocks (MSCI AC World ex-US Index) is relatively high at 0.80. 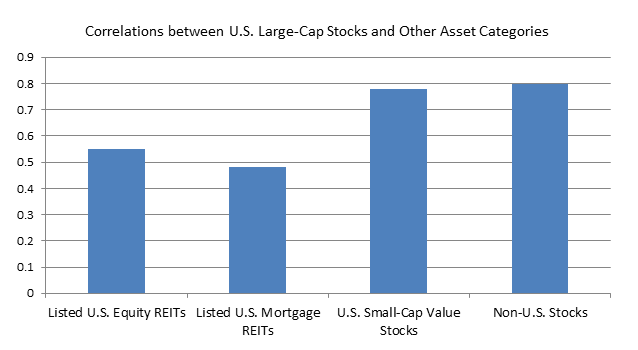 During the summer of 2015 the correlation between exchange-traded U.S. equity REITs and the broad U.S. stock market (Dow Jones U.S. Total Stock Market Index) dipped to as low as 0.40, a level not seen except in the “dot-com bubble” period of 2000-2003.  During the latter part of 2015, however, the correlation moved back up to historically more common levels around 0.55.  Beta, too, returned to historically normal levels around 0.6 after having dipped as low as 0.50.

These estimates are updated monthly, and can be downloaded here.