Total returns from a passively managed investment in listed U.S. equity REITs averaged 11.45% per year over the 25 years ending April 2015, compared to just 9.95% per year for large-cap U.S. stocks.  How much of a difference does that make for long-term investors?

Higher returns, sustained on average over a long time, make a big difference. 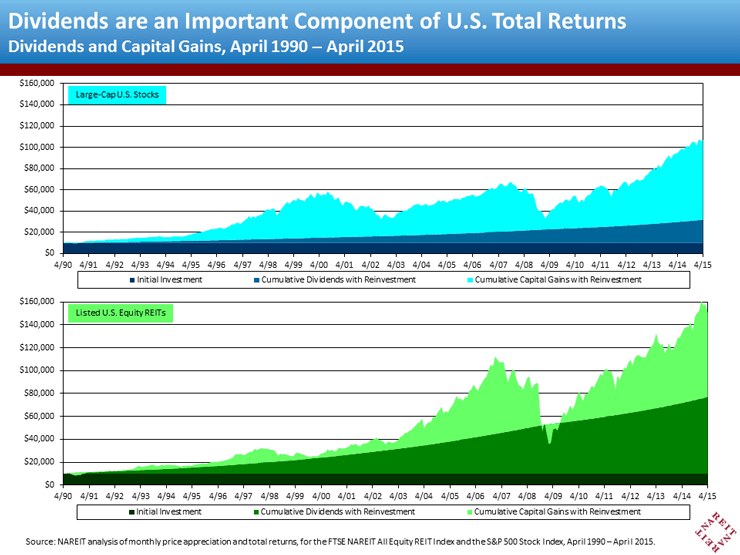 Most stocks don’t pay very much in dividends: of the total gains to your S&P 500 investment, only a total of $21,872 (22.5%) would have come in the form of regular income; the other $75,197 (77.5%) would have been capital appreciation—that is, paper gains.  In contrast, most REITs distribute all of their taxable income to shareholders, and as a result, over the same period, your REIT investment would have generated $66,980 in dependable monthly or quarterly dividends—more than three times as much as your S&P 500 investment would have generated.

Besides providing a steady income, dividends that are reinvested provide a real boost to wealth.  The annual capital appreciation of the S&P 500 averaged 7.71% over the period April 1990 to April 2015, which is higher than the 5.99% for listed equity REITs—but, because reinvesting the strong dividend stream continually increased the base, the total value of capital appreciation in your REIT portfolio would very nearly have kept pace with your S&P 500 stocks at $73,417.  Meanwhile, the income return in your REIT portfolio would have averaged 5.46%, more than twice as strong as in your large-cap stock portfolio.

Market participants often predict that returns on foreign investments should be higher than domestic returns, but that hasn’t been the case over the past 25 years.  If you had put the same $10,000 initial investment into global stocks (the MSCI All-Country World Stock Index), it would have grown by just $55,535—43% less than the gain on large-cap U.S. stocks, and 60% less than the gain on listed U.S. equity REITs—with total returns averaging just 7.81% per year.  As in the U.S., though, global REITs and other listed property companies (LPCs) handily outperformed global stocks. 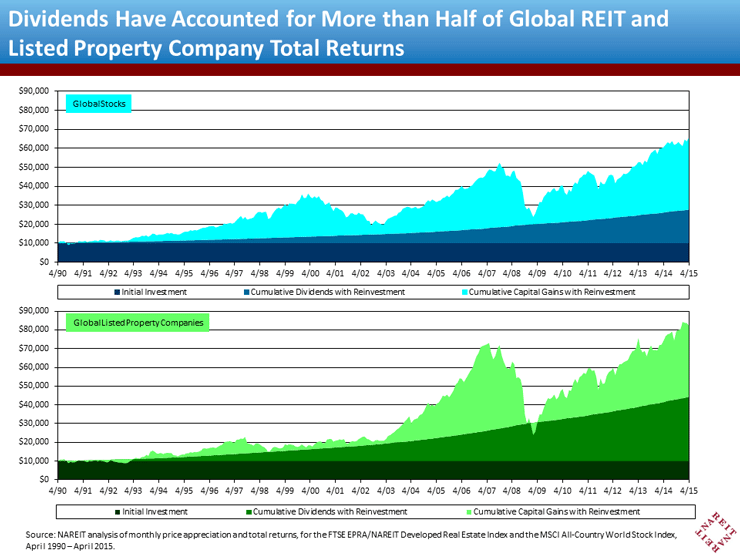 If the same $10,000 had been invested in the FTSE EPRA/NAREIT Developed Real Estate Index, it would have grown by $72,393—30% more than the global stock investment.  In fact, the global listed REIT and property company portfolio would have produced even greater growth in capital, by $38,087 compared to $37,787 for the global stock portfolio, thanks to the wealth-boosting power of strong income returns (4.17% for global LPCs compared to 2.50% for global stocks).
Essentially every investor should have some exposure to the four fundamental diversifying asset classes: stocks, bonds, real estate through REITs and other property companies, and cash for immediate liquidity.  Foreign holdings can help diversify a U.S.-based portfolio even more.  But the most important builder of wealth over the last full generation has been the listed U.S. equity REIT market.