Some market participants may be concerned about the future course of stock prices, but the correlation between listed REITs and the broad stock market is at its lowest level in more than 12 years, suggesting that whatever factors happen to drive the non-REIT part of the market will not necessarily spill over to affect the REIT market.

Monthly total returns for listed U.S. REITs and the broad U.S. stock market through April indicate that the correlation between them was just 0.405, the lowest value since it hit 0.400 in March 2003.  (The figures are based on a sophisticated empirical method called DCC-GARCH modeling, which Nobel prize-winning economist Robert Engle developed in 2002 for that purpose, and uses monthly total returns from the FTSE NAREIT All REITs Index and the Dow Jones U.S. Total Stock Market Index.) 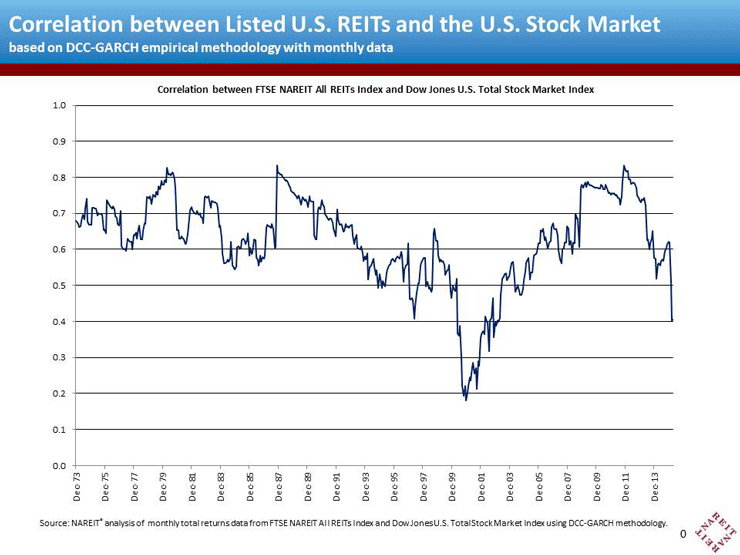 The REIT-stock correlation fluctuates but has remained between 0.56 and 0.72 for most of the time since REIT returns were first calculated at the beginning of 1972.  During the Modern REIT era, which started in about 1992, it has usually been even lower, between 0.51 and 0.66.  The REIT-stock correlation was abnormally low at 0.18 in late 2000, a time when the REIT bull market coincided with sharp declines in the stock market, and was abnormally high at 0.83 in the fall of 2011 as a result of the European debt crisis.  While it is often noted that correlations tend to “spike” during market crises, it is notable that during the 2008/09 liquidity crisis the REIT-stock correlation reached a maximum value of just 0.788.

Beta—a measure of systematic risk—also hit a long-time low during April of this year.  Beta for listed U.S. REITs relative to the Dow Jones U.S. Total Stock Market (also estimated using the same DCC-GARCH methodology) was just 0.48 as of the end of April, lower than at any time since it reached 0.45 in November 2003.  Beta has fluctuated mostly between 0.53 and 0.77 since the beginning of 1972; during the “modern REIT era” beta has generally fluctuated between 0.48 and 0.82, with the highest values coming during the liquidity crisis when REIT and stock volatilities as well as the correlation jumped upward. 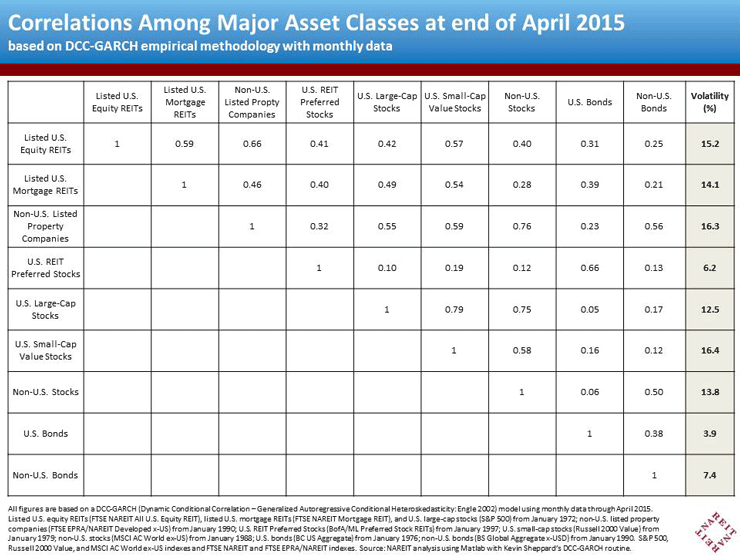