September 2017 marks 8½ years since the beginning of the current real estate cyclical bull market.  Numerous writers (including Nobel prize winner Robert Shiller, my dissertation advisor) have expressed concern that the broad stock market may have become overvalued, and others (including myself) have expressed concern that the private side of the real estate market may have ventured into the same territory.  Exchange-listed equity REITs are the nexus of those two markets—where investors can get the returns of real estate through companies traded on stock exchanges—so it seems to be a good time to evaluate the current market cycle from the perspective of an investor in listed equity REITs.

From the outset you should keep in mind two important points: (1) REITs are not very like other stocks, and (2) REITs are real estate, but they’re not quite the same as private real estate.  Here’s what I mean.

First, listed equity REITs differ substantially from non-REIT stocks—even though they’re traded through the same stock exchanges—because the primary drivers of returns for listed equity REITs come from the real estate market cycle, not the business cycle that drives returns for almost all other companies traded on stock exchanges.  Since the beginning of 1972, when NAREIT started keeping track of REIT returns, the correlation in monthly returns between listed equity REITs and the S&P 500 has been 57%.  Some people continue to make the mistake of claiming that listed equity REITs have recently become more correlated with the broad stock market, so let’s refute that once and for all.  During the 2008-09 liquidity crisis the REIT/stock correlation did increase to about 80%, but over the past 5 years, the REIT/stock correlation has been just 46%.  In other words, the correlation has been substantially lower since the Great Financial Crisis ended.  So the fact that someone like Bob Shiller has argued that the stock market is overvalued doesn’t mean that the REIT market is overvalued.

With that background, let’s compare the current real estate market cycle with previous ones, and then take a look at current listed equity REIT valuations.

The severity of the 2007-09 downturn owed, of course to the fact that a normal cyclical bear market in real estate was followed by a financial crisis the likes of which only the oldest members of our society had witnessed.  It took a full 41 months after the market trough for exchange-traded U.S. real estate to recover fully: it was not until the end of August 2012 that investors in listed equity REITs regained the portfolio values they had at the end of January 2007.

The big difference between the current bull market and the two previous ones is that the current bull market started from the depth of a liquidity crisis.  Because of that, a more telling comparison is between returns during the expansion phases—that is, after investors had recovered fully from the downturn.  For investors in the 1970s and 80s, the expansion phase that ran 155 months from September 1976 through August 1989 gave them total returns averaging 18.7% per year.  For investors in the 1990s and 2000s, total returns during the expansion phase (190 months from March 1991 through January 2007) averaged 15.8% per year.

Today’s investors, though, haven’t yet reaped nearly the rewards they would ordinarily expect from a REIT expansion: total returns over the 61 months from July 2012 through August 2017 have averaged a relatively paltry 9.7% per year.  In fact, as Chart 1 shows, during the first 61 months of the expansion phases of the past two cycles, total returns averaged a much higher 20.7% per year (September 1976 – October 1981) and 12.9% per year (March 1991 – April 1996). 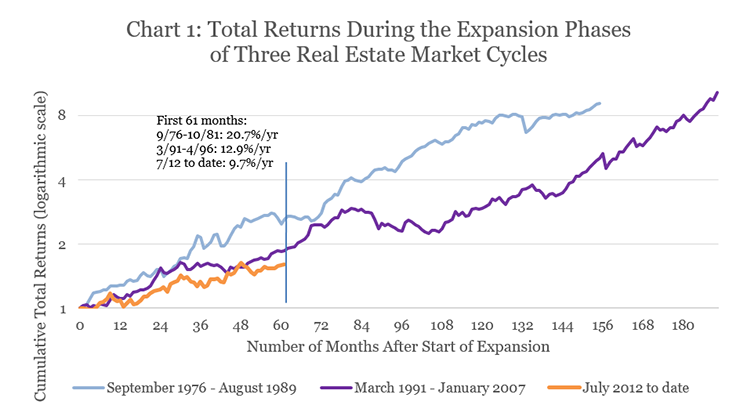 In short, listed equity REIT returns averaging 21.1% per year over the past 8½ years look great at first—but they’re actually not as strong as it seems they should have been, in comparison with previous real estate upturns and given how severely the GFC hit.

Earlier this year I also published a market commentary showing how one can use an estimate of the average REIT stock price premium to net asset value (P-NAV) to predict returns on listed equity REITs, and the same analysis can also be applied to predict outperformance for listed equity REITs relative to the total returns on institutionally owned properties in the private real estate market.  Updating that analysis through 2017Q2 suggests that—again, if historical patterns hold—returns to investors in the public (exchange-listed) part of the real estate market may exceed those measured by the NCREIF Property Index for the private (illiquid) part of the real estate market by something like 7.1 percentage points per year over the next five years.

Let me summarize what my empirical analyses suggest: