Low Cap Rates Are Flashing a Signal, but is it Yellow, Red… or Green?

Rising prices of commercial real estate over the past eight-plus years have fed concerns that valuations may be getting too rich. Indeed, cap rates are below the lowest levels reached during the prior cycle in the 2000s. Are these low cap rates flashing a signal that speculative pricing is setting the market up for a correction? Given the history of commercial real estate markets, it’s prudent to have some concerns following long periods of price increases. 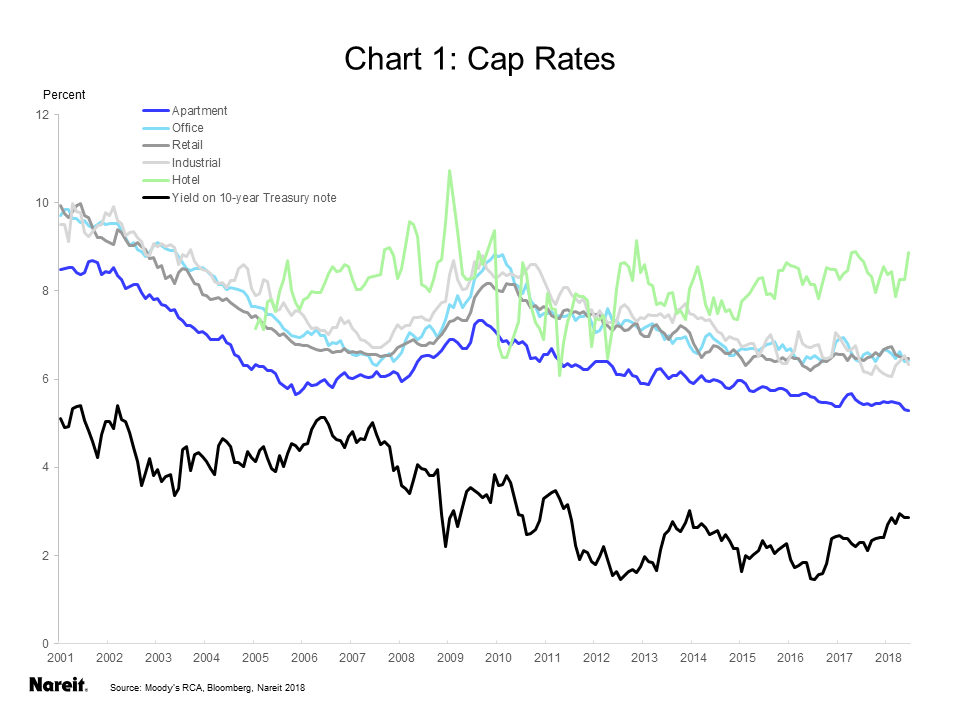 There’s another possibility, though, which is that low cap rates are based on realistic expectations of future growth of NOI. After all, rising NOI could imply future income from investment properties that may justify current valuations. And, given that national vacancy rates are low for most major property types, and supply appears to have slowed a bit this year, it’s not hard to construct a scenario of rising NOI in the years ahead.

Either scenario is plausible, that cap rates could be flashing a yellow or red warning signal about speculative pricing, or, conversely, that low cap rates may be a green light about future NOI growth. This ultimately is an empirical question, then, of what past experience with low cap rates has signaled about future market performance. Fortunately, there is a rich history of historical data on cap rates and NOI growth across a large number of U.S. metro areas over the past 30-plus years that allows us to test whether the current signals are flashing yellow or red, or green.

Specifically, we analyzed data from CoStar on cap rates for the top 54 metro areas from the early 1980s through the present, and compared cap rates to the growth of NOI over the subsequent coming years (we examined year-ahead growth as well as three year growth in various formulations of our model, with similar results). With data on a cross section of cities over several decades, we were able to examine two related questions (for the data wonks in the audience, we estimated a panel regression model, with fixed effects for the metro areas):

The regression results find that NOI growth tends to accelerate following periods when metro areas experience low cap rates. In simple terms, this is the “green light” scenario, that low cap rates reflect expectations of higher NOI growth in the future, and that more often than not, over the past three decades, such expectations have proven to be correct.

The details of the analysis are that, using the full panel data (that is, controlling for both the time series effects over the years and the cross-sectional differences across metro areas), we find that a one percentage point lower cap rate is associated with NOI growth that is three-quarters percentage point higher. This would be a substantially higher rate of NOI growth that could support high property valuations. The results are statistically significant, which is technical language that we can be fairly confident that we have estimated a meaningful relationship.

We conducted several other versions of this analysis as robustness checks. For example, we pooled together all of the different metro areas to examine only the time series relationship between cap rates and future NOI growth. That is, regardless of whether you look at New York City or Peoria, do lower cap rates tend to be followed by faster growth of NOI? As we found in the full panel regression, the answer is yes, lower cap rates are more often than not a “green light” about higher future NOI growth. 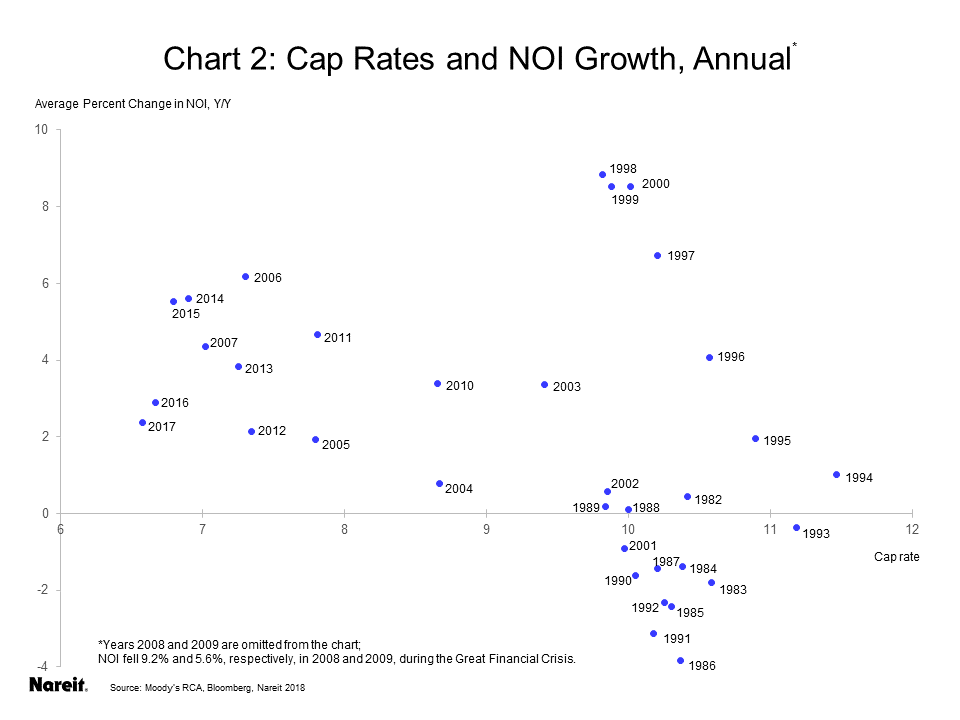 Similarly, we explored the cross-sectional differences across metro areas to see if those with lower average cap rates from the early 1980s to today tend to have higher average growth of NOI over the full time period. Again, we confirmed the earlier results, finding a statistically significant relationship. This helps explain why property prices are higher in Gateway cities like San Francisco, Los Angeles and Washington, DC: These larger cities also tend to have higher growth of NOI over the years. 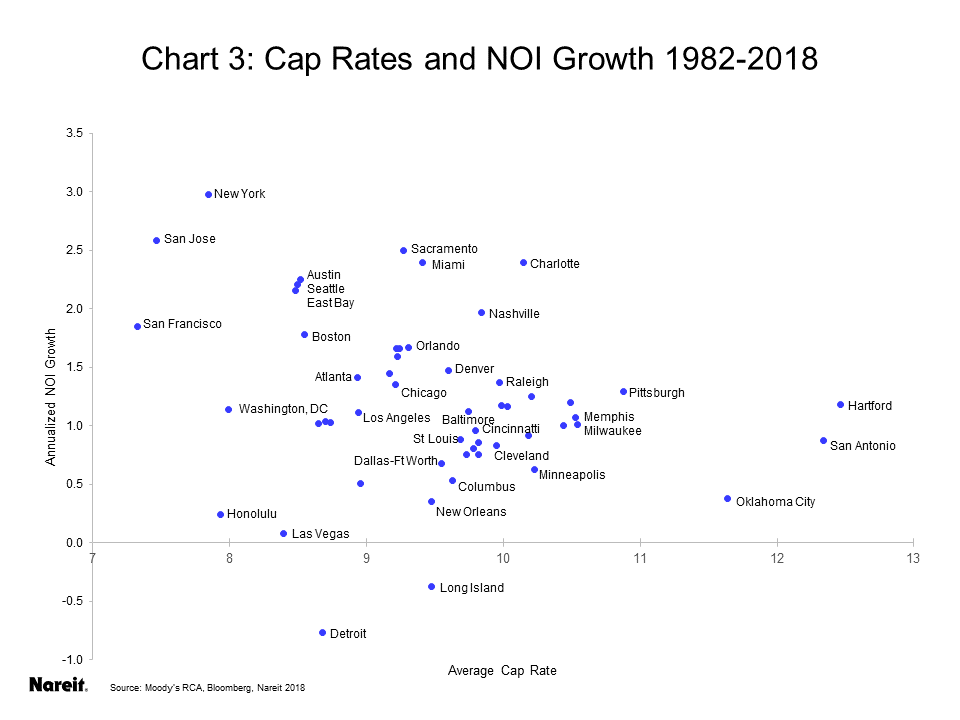 There are a few caveats to this analysis. First, we controlled for any effects on future NOI from changes in macroeconomic fundamentals, for example, the Great Financial Crisis or other recessions. This is not because the likelihood of a recession is unimportant for the risk-reward trade-off—indeed, NOI nearly always falls during recessions, and commercial property prices may fall as well. Rather, it is because low cap rates do not provide a clear signal of future recessions, and we wanted to isolate the relationship between cap rates and future NOI growth during periods of continued expansion.

Furthermore, the regression results explain a relatively small portion of the overall variation in future NOI growth. This indicates that, although we found a robust relationship between low cap rates and higher future NOI growth, there are many other factors that may impact future income on commercial properties.

These caveats should remind market participants to evaluate carefully the potential risks of investments in commercial real estate, but the overall message of this analysis is that the historical record shows low cap rates do, in fact, tend to signal correctly strong future NOI growth—the green light scenario. With the economy enjoying low unemployment and vigorous GDP growth, the outlook for commercial real estate looks pretty good.