I’ve been concerned since late 2015 about the wide discrepancies in how essentially the same assets are being valued on the public and private sides of the real estate market. I noted in August that, for institutional investors, the problem seemed to be that they were reporting unrealistically high appraised values while transaction prices were more realistic. More recently, though, data from multiple sources suggest that aggressive appraisals aren’t the only problem: transaction prices in the private real estate market seem to have become very aggressive, too. I haven’t been so worried about top-heavy pricing in the private real estate market since 2008—and it seems to me that institutional investors such as pension funds, endowments, and foundations should seriously consider hedging against declines in the values of their private equity real estate portfolios.

Information that affects property values generally shows up in three ways, but at different times:

For example, I’m able to model the changes in monthly values of the RCA CPPI pretty accurately using the lagged moving average over the past 24 months of daily values for the FTSE Nareit PureProperty® Appreciation Index, which uses REIT stock price changes to infer changes in the values of the properties they own. And it’s a pretty close fit: using the data available back to September 2002 the correlation between the two series—a monthly index based on property transaction prices, and lagged moving averages from a daily index based on REIT stock prices—has been 81 percent. The two series are graphed as the dark blue and light blue lines in Chart 1. 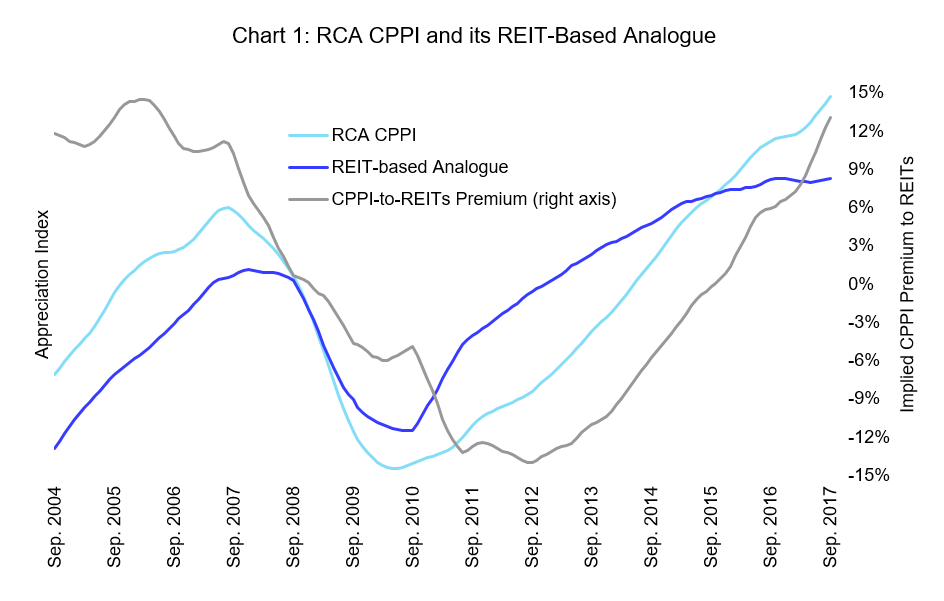 Look at the right part of the graph, though, and you’ll see that the relationship between the two series seems to have broken down starting in 2015, when the CPPI continued soaring while its REIT-based analogue started flattening. In other words, investors on the public side of the real estate market were becoming more conservative in estimating the growth in property values—while those on the private side of the real estate market were paying increasingly aggressive prices to buy properties, many of them from REITs. (In fact, the 81 percent correlation between the RCA CPPI and its REIT-based analogue is actually low by historical standards: before the current disconnect started building up, the correlation had been as high as 95 percent!) The grey line shows the difference between the two series—and the comparison suggests that real estate prices in the private market have be now become inflated by 13 percent relative to pricing for REITs.

Chart 2 shows the same analysis, but in this case comparing the NTBI total return index with its closest REIT-based analogue, which is the lagged moving average over the past six quarters of daily values for the FTSE Nareit PureProperty Total Return Index. In 2017Q3 the NTBI soared by an incredible seven percent (6.7 percent after fees and expenses) whereas its REIT-based analogue increased by less than two percent—and as a result, prices paid by large institutional investors (and therefore total returns reported for their properties) now seem to be inflated by 18 percent relative to pricing for REITs. 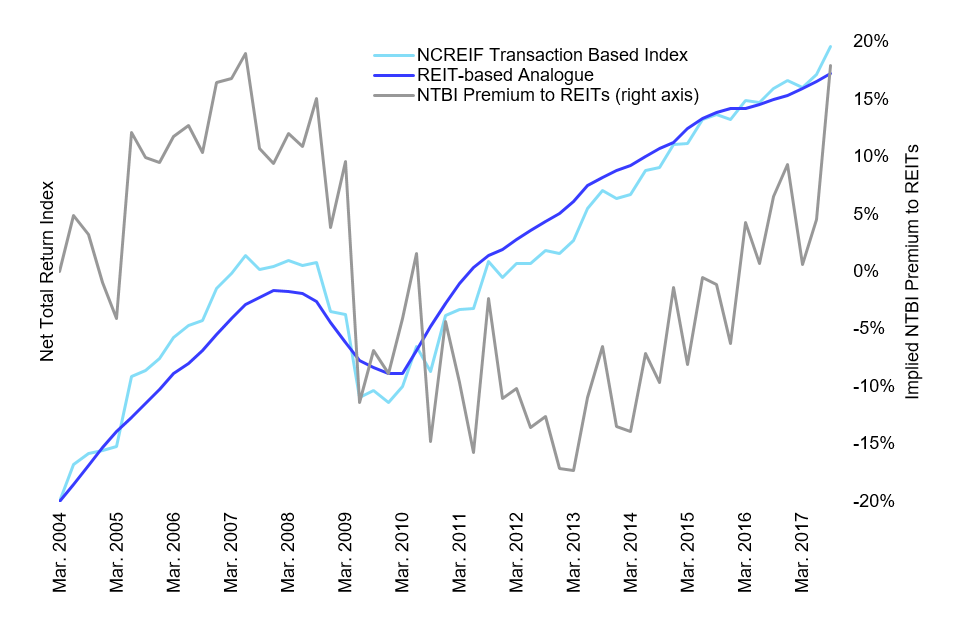 In both comparisons, the implied premium for real estate prices in the private market relative to REITs is higher now than at any time since 2006-2007. That doesn’t mean I think we’re going to see a cyclical downturn in the real estate market: fundamentals are too strong to predict a downturn, and in fact I think it’ll be several years more before we even start nearing the end of this real estate market cycle. (Of course it’s always possible that some unexpected policy shift or other event could trigger downward revaluations.) I do, however, expect to see some softness—and perhaps even a decline—in private-market pricing of real estate assets over the next few years, at least relative to REITs.

That means if I were an institutional investor (such as a pension plan, an endowment, or a foundation) with significant holdings of private real estate, I would be worried about the possibility that the value of my real estate portfolio could decline over the next few years even if fundamentals remain strong. That could have several effects, none of them pleasant: for example, a decline in the value of my real estate holdings could reduce my ability to borrow against my illiquid assets to fund cash commitments.

If you’re worried about a decline in the value of your private real estate portfolio, there are several tools from the REIT-based market that you could use to manage your downside risks. The most straightforward, of course, is just to shift some of the capital currently trapped in illiquid but overpriced private real estate assets, and use that money instead to take liquid positions in REITs, which I’ve argued are currently undervalued.  Think of it simply as rebalancing the real estate portfolio from a segment with relatively high valuations to a segment with relatively low valuations.

The FTSE NAREIT PureProperty Index series offers other possibilities that may work better for some private-side real estate investors. Given the high historical correlations between the PureProperty indices and the various measures of property values in the private market, you could use the PureProperty series to develop a hedge (an asset position whose value can be expected to increase if the value of your property portfolio declines) or a risk-management derivative (such as an option that can be expected to pay off in the event of a real estate decline). In fact, PureProperty indices make it possible to customize a derivative to match a particular portfolio by property type (apartment, health care, hotel, industrial, office, or retail), by region (East, Midwest, South, or West), and even by amount of leverage. And the PureProperty indices are based on underlying assets that are investable and liquid, which means any investment bank should be able to write your hedge, option, or other risk management tool.

Risk management tools such as those made possible by the PureProperty Index Series aren’t going to be the solution for every private-side real estate investor. Given the near-record discrepancies between real estate values in the public and private markets as measured above, though, there are probably more than a few institutional investors on the private side of the real estate market who should give them some consideration.