On the Other Side of the CMBS “Wall of Maturities”

The market excesses of a decade ago had a long tail, as the more than $450 billion of CMBS issued in 2006 and 2007 held a large amount of 10-year commercial mortgages. These 10-year loans came due in 2016 and 2017, and were frequently termed the “Wall of Maturities”. Questions about how these loans would be refinanced, and whether they might trigger a wave of sales that would weigh on property prices, have been a hot topic in financing circles.

Now that we are on the other side of the Wall of Maturities, it’s worth a look back to see how the market fared, and what are the prospects for the CMBS market in the year ahead.

The market handled the maturities relatively smoothly, with a moderate rise in delinquency rates that has already turned back down. Other lenders—especially commercial banks and life insurance—increased their lending to commercial real estate to offset drag from the CMBS market. Furthermore, most properties have benefitted from rising prices since the crisis, which facilitated refinancing the debts: 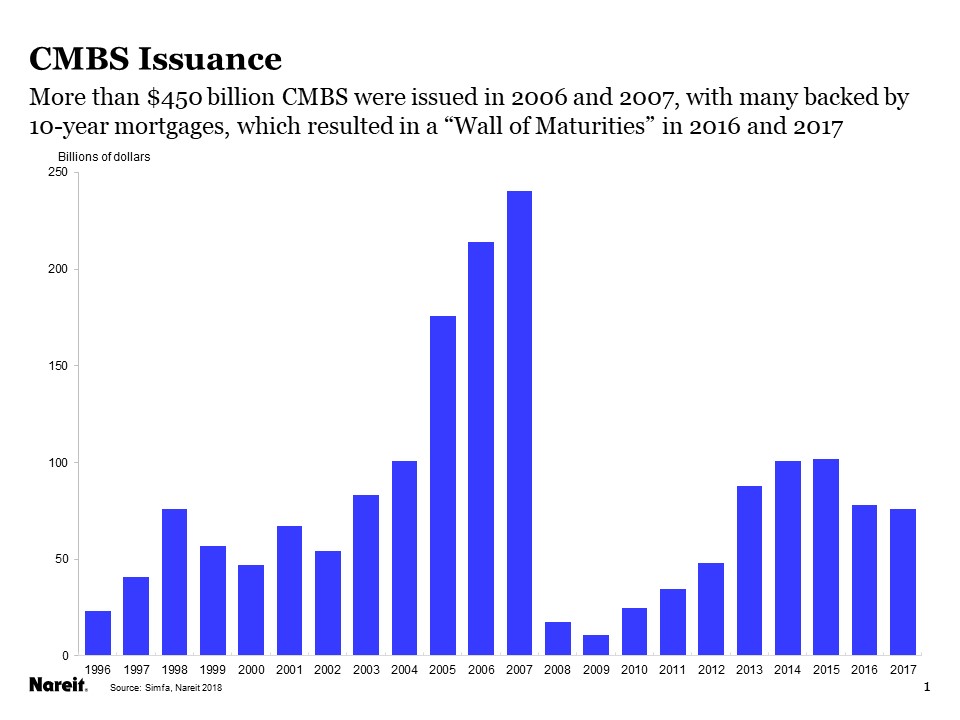 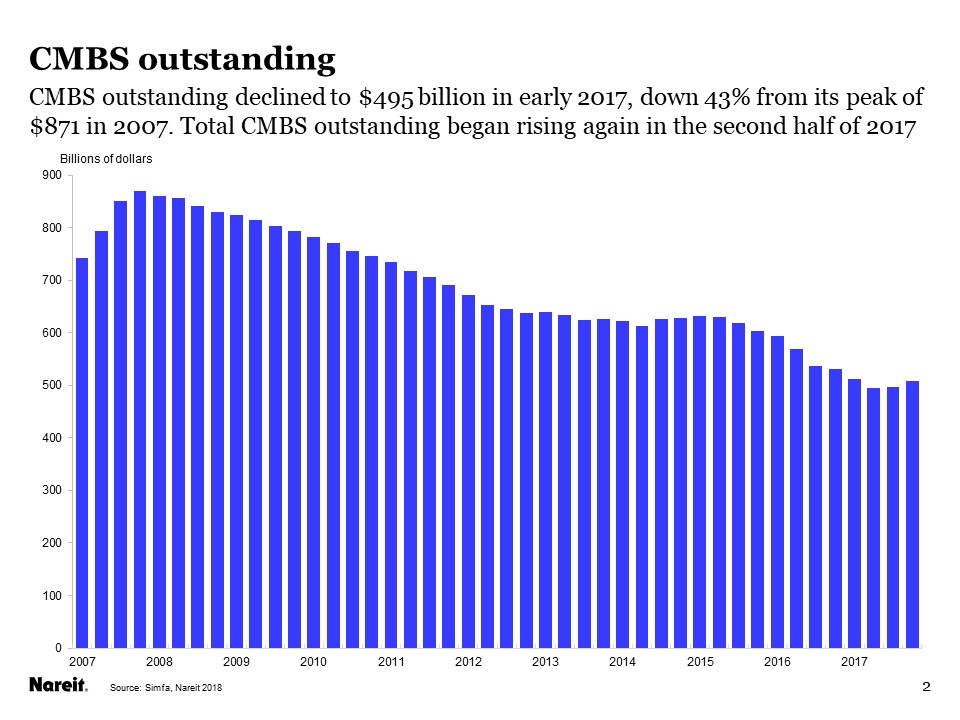 CMBS outstanding declined as the Wall of Maturities came due. Total CMBS outstanding dropped to $495 billion in early 2017, down more than $100 billion from the end-2015 amount, and a 43 percent cumulative decline from the market’s peak in 2007 (chart 2); 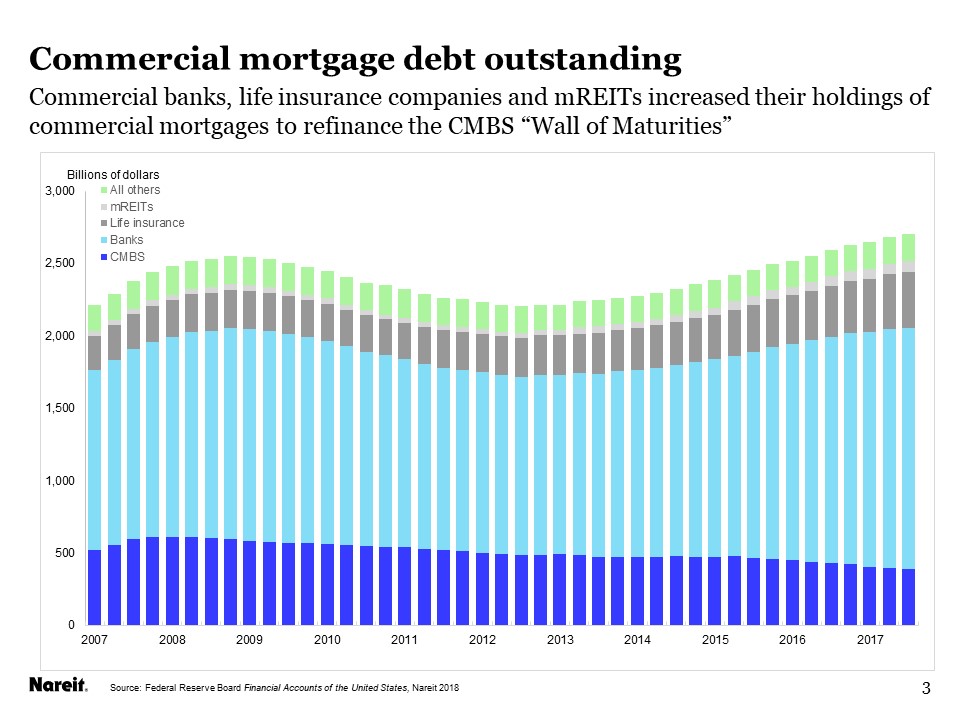 Other lenders stepped in. Commercial banks, life insurance companies and mREITs all increased their holdings of commercial mortgages as the CMBS market ran off. Banks provided $320 billion of new debt funding to the commercial real estate market, while insurers lent $130 billion and mREITs an additional $40 billion (chart 3, data through 2017:Q3). With multiple sources of capital and commercial property prices well above their pre-crisis peak, most owners were able to refinance their debts; 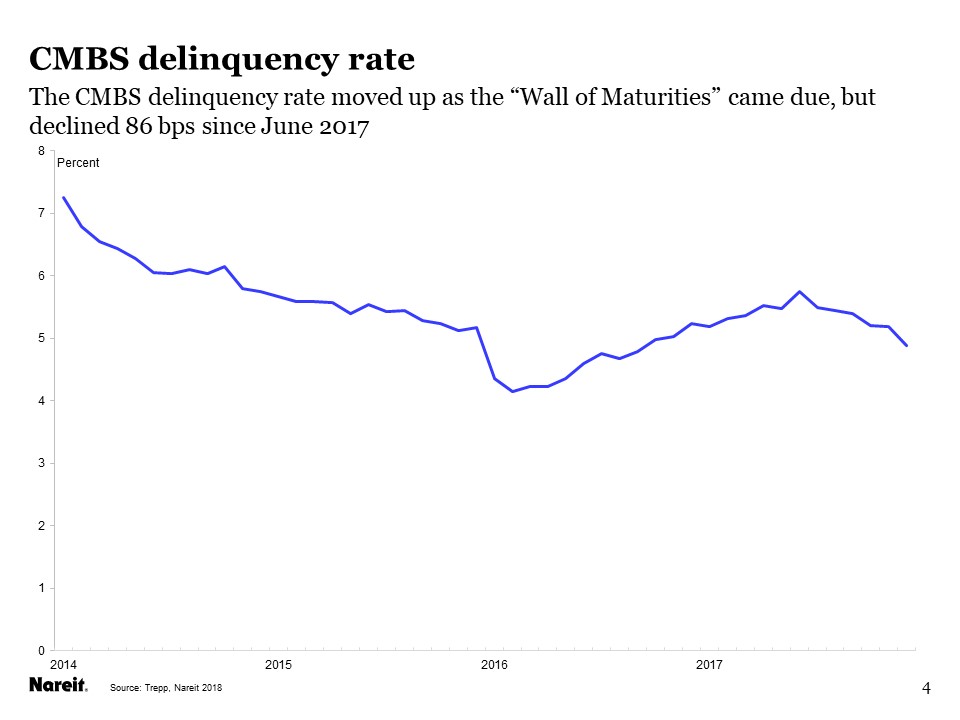 CBMS delinquency rates rose, temporarily, as the earlier vintages were paid off. The 30+ day delinquency rate on CMBS rose 160 basis points from its early 2016 trough to a peak of 5.75 percent in June, 2017. As the Wall of Maturities passed, however, delinquencies quickly began falling again, and by December, 2017, had reversed more than half of this run-up (chart 4). 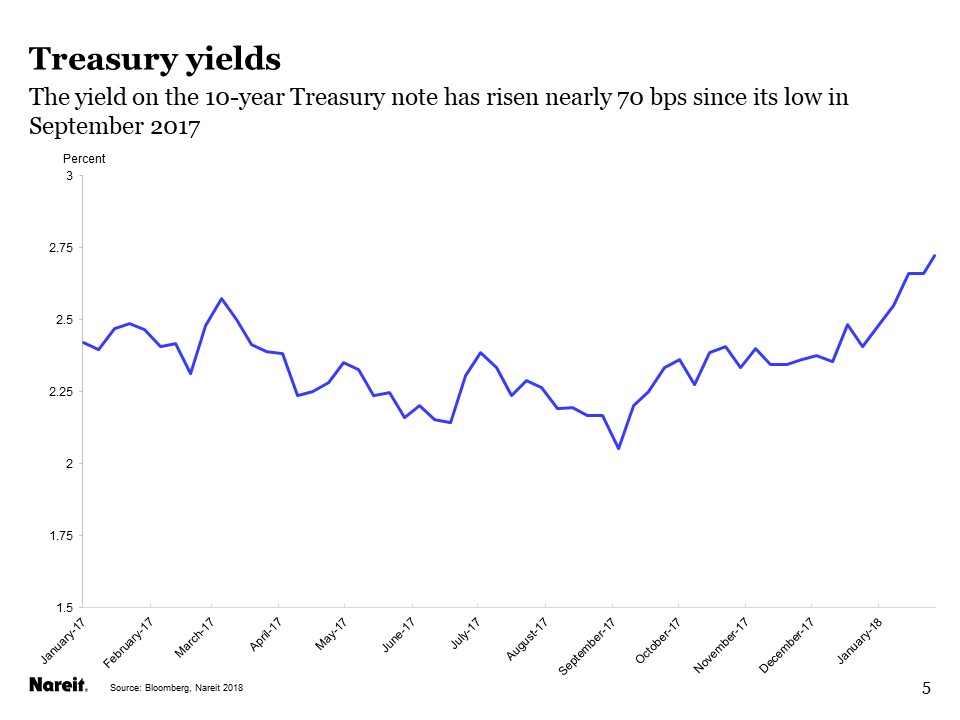 The commercial mortgage market faces new challenges in 2018. Interest rates have been moving up in recent months. The yield on the 10-year Treasury note rose above 2.70 percent in late January, nearly 70 bps higher than its low point last September. Higher rates may present new challenges to the commercial mortgage market, although rising property values and solid NOI growth should continue to make the commercial real estate sector an attractive financing proposition.