Outlook for Commercial Real Estate: Are We in the 9th Inning?

Many analysts have noted that increasing construction and high prices on commercial properties often presage a downturn in the sector, and have asked whether this cycle may be approaching the 9th inning. NAREIT research economists have examined data from several sources to shed further light on the risks that the sector may be approaching a correction.

One broad-based measure of construction activity is the Census Bureau series on construction put-in-place. Measured in billions of dollars (instead of millions of square feet, or units), these figures allow more directly a comparison across property types and over a period spanning more than two decades. To facilitate comparison with earlier periods, NAREIT adjusted all figures for inflation.

Real construction activity has indeed increased sharply. Construction of all major property types has increased at a 16 percent annual rate since 2011, and is currently more than double the rate five years ago. The sharp rise, however, mainly reflects how low building activity fell during the crisis. Despite the sustained rapid increase, construction is still more than 10 percent below the average level that prevailed between 1993 and 2008. 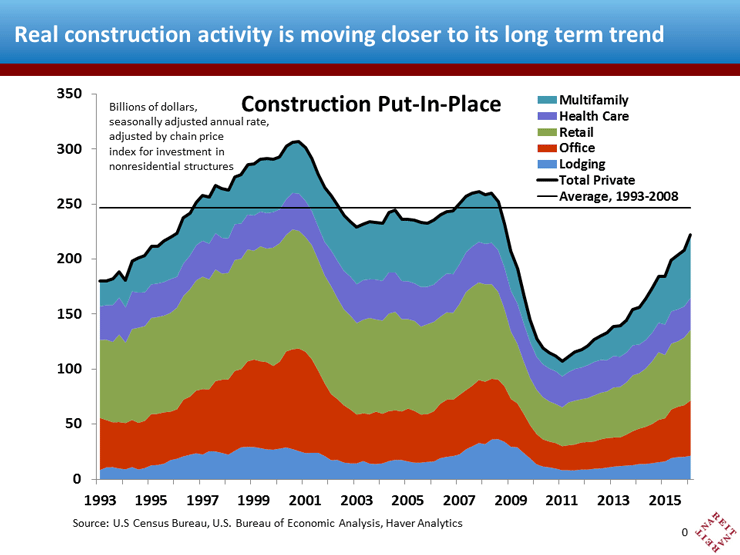 Of course, it’s not just the absolute level of construction that matters, but where it stands relative to demand. To get a better picture of the supply/demand balance, we used data on net absorption and completions from CoStar, and calculated excess absorption over completions, as a percent of completions. The pattern over history makes sense—during periods when the commercial real estate market was tightening in the 1990s, mid-2000s and early in this decade, absorption exceeded completions by 50 percent or more. In fact, in the early years of the current cycle, excess absorption was two to three times the level of completions. The data also show that periods when the market weakened, including the late 1990s and during the Great Recession, excess absorption turned negative. 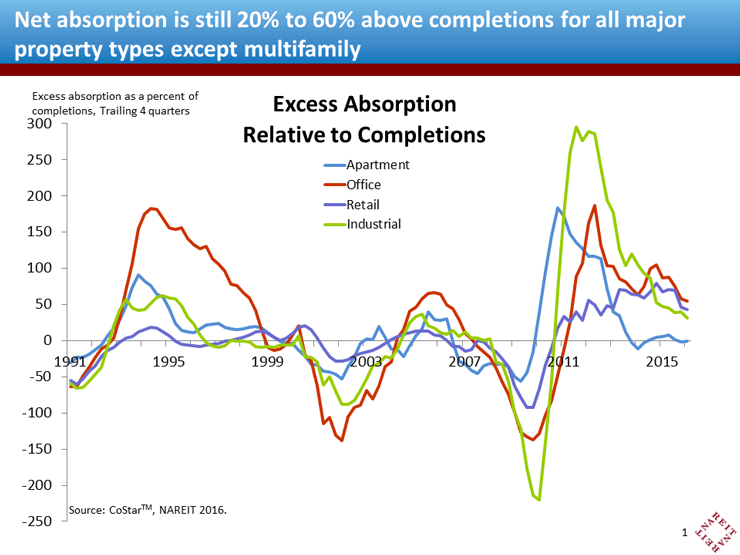 The current level of net absorption relative to completions is still rather elevated. To be sure, it is far below the levels posted four or five years ago, but this mainly reflects the low level of construction in that period. For most main property types today, net absorption is 20 percent to 50 percent above completions. That suggests that, even if construction continues to rise at a double-digit pace, demand will exceed supply for several years into the future. The one exception is the apartment market, where absorption and completions are roughly balanced. The apartment market remains extremely tight, however, with vacancy rates still near record lows across the country. As a result, new units are leased relatively quickly as they become available, and there is little or no excess supply in the existing stock.

New construction, though well above levels two or three years ago, is still playing catch-up with demand. While some local markets or some property types may take a while to digest new supply, on a national basis there is little evidence that we are nearing the end of a building cycle. Far from being in the 9th inning, this is a reminder that Opening Day was just a few weeks ago, and the All Star Break remains far in the future.