The year 2020 is officially in the history books. Despite fervent desires to block out memories of last year, a brief retrospective of REIT stock market performance during the pandemic can help provide insights into what to expect in the year ahead.

To anticipate the main findings of this review, the historic stock market declines during the periods of greatest uncertainty about the pandemic were partly or completely reversed as the market reality proved less threatening than some of the initial fears. Real estate markets have been the focus of some of these concerns, especially that the pandemic may have caused long-term shifts in how real estate is used—think “work from home” and “Amazon deliveries”—and that these shifts may continue influence REIT sectoral performance well into the future.

REITs lagged the broader market during much of the mid-year recovery from the initial plunge, perhaps reflecting these longer-term concerns. Markets have rallied since initial vaccine results were released, however, and those REIT sectors that had suffered the largest declines last spring have posted impressive gains—for example, lodging/resorts had a total return of greater than 50% in the fourth quarter of 2020. Should these trends continue in 2021, REITs may outperform the broader market in the months ahead.

Opening chapters: A strong start to 2020 is dashed by the coronavirus

In what feels now like distant history, markets were rallying at the start of 2020. The FTSE Nareit All Equity REITs index reached a peak on Valentine’s Day, with a total return year-to-date of 7.4% in the first six weeks of the year. REITs outperformed the broader markets early in the year, as the S&P 500 had a 5.1% total return at its peak in mid-February. 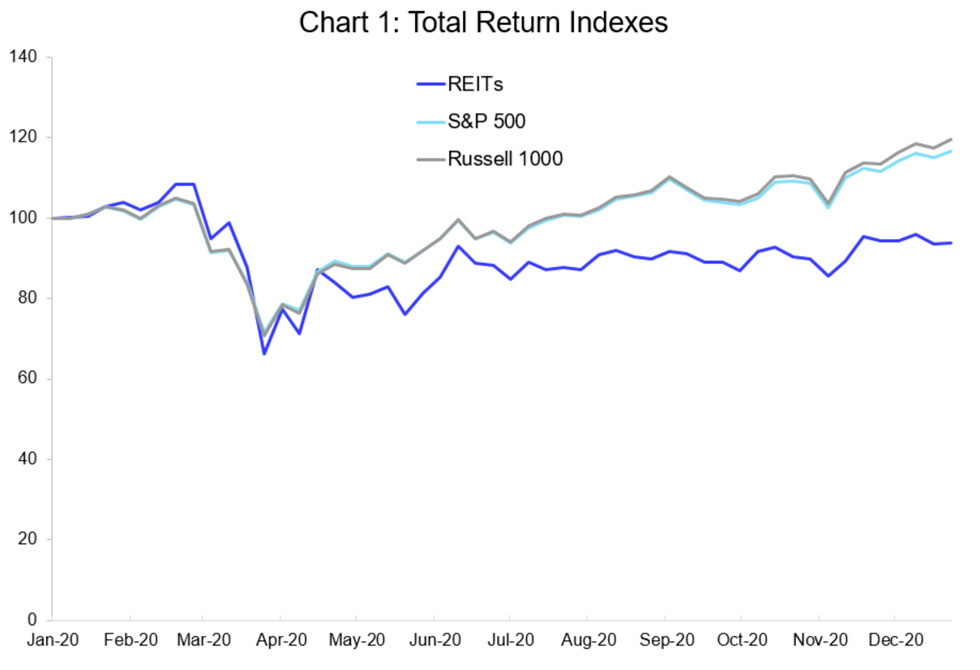 These gains quickly evaporated and turned to double-digit losses as COVID-19 was discovered spreading rapidly in the United States. Markets reached a low point in mid- to late-March, with REITs down 41.9% from their February peak. Broader market indices, including the S&P 500 and the Russell 1000, declined by similar amounts.

Trading volumes for REIT shares rose to record highs during this period of peak uncertainty. The average weekly trading volume for REITs reached 560 million shares in early April, more than twice the level of trading prior to the onset of the pandemic. Trading volumes also spiked higher in broader market indices, although volumes on the S&P 500 did not return to the peak levels reached following 9/11 and during the financial crisis of 2008. 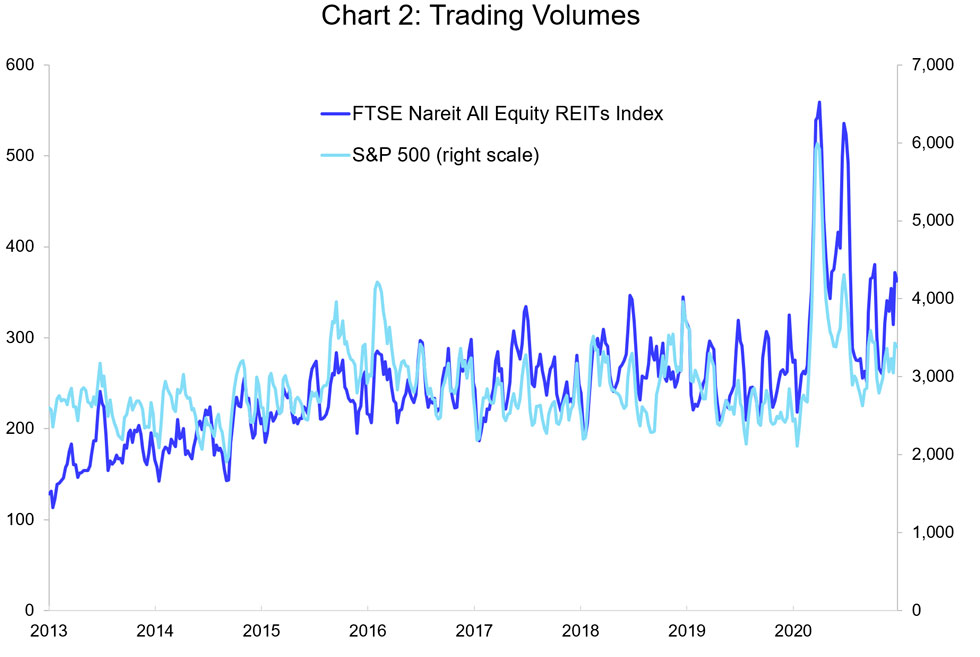 The sharp losses in March appear in hindsight to have been an overreaction to the fears of the impact of the pandemic on the economy corporate earnings, including for REITs. Swift response by policymakers, including the Federal Reserve resurrecting programs designed during the financial crisis of 2008-2009 as well as passage of the CARES Act and fiscal stimulus, bolstered the outlook. Stock prices began recovering from these March lows and by mid-year had significantly trimmed the earlier losses.

Lingering concerns about a longer-term impact on real estate

REITs did not rebound as completely as the broader market, however. By the end of May, the year-to-date total return on the S&P 500 was -5.0%, compared to a -15.3% return for REITs. This lagging performance may reflect concerns discussed above that the pandemic could

induce changes in how people work, live, and travel, and that these changes could affect longer-term demand for commercial real estate.

REITs continued to move in a relatively narrow band from mid-year until the fall, even as the S&P 500 and Russell 1000 pushed to new record highs by mid-August.

The pandemic did produce some winners

There are several REIT sectors that support the digital economy, and these experienced a surge in demand during the pandemic. These include infrastructure REITs that own cell towers that transmit both voice and data communications, data center REITs that house the servers that process and store these messages and host web pages on the Internet, as well as industrial REITs that own logistics facilities to help transport goods purchased through e-commerce.

REITs in these tech-linked sectors performed critical functions for American businesses, consumers, and households as they adapted to life during the pandemic. The strong demand also boosted current earnings and expected future earnings growth, resulting in robust stock market gains in the first half of the year.

The vaccine rally closed out 2020

The announcement of successful trials and subsequent approval of two vaccines against COVID-19 brought hope that the pandemic can be contained in the months ahead. The prospect that the end may soon be in sight spurred broad increases in share prices.

The vaccine rally was especially pronounced among the REIT sectors that had declined the most in early 2020. As mentioned above, lodging/resort REITs had a total return of greater than 50% in the fourth quarter of 2020. Other sectors with gains greater than 20% include retail (23.4%) as well as home financing and commercial financing mREITs (22.8% and 32.4%, respectively). Nevertheless, these impressive gains still left these sectors in negative territory for the year as a whole. 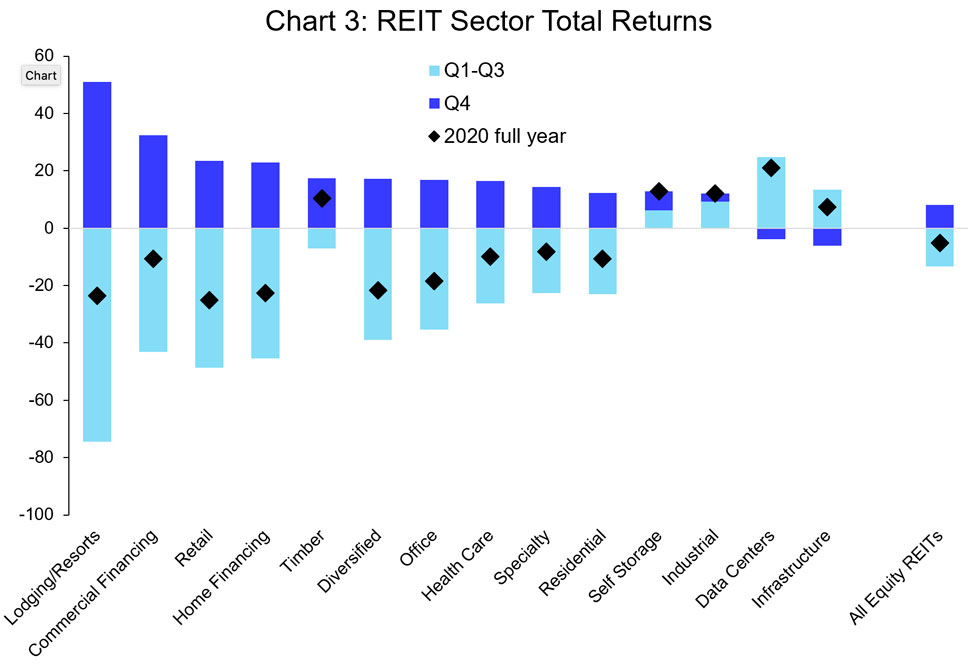 The news of the vaccines, however, had a negative impact on the tech-related property sectors that had outperformed earlier in the year. Total return for infrastructure REITs was -6.2% in the fourth quarter, and -3.8% for data center REITs. These declines merely trimmed the gains from earlier in the year, however, with both these sectors, as well as self storage, industrial, and timber REITs, in positive territory for the year as a whole. 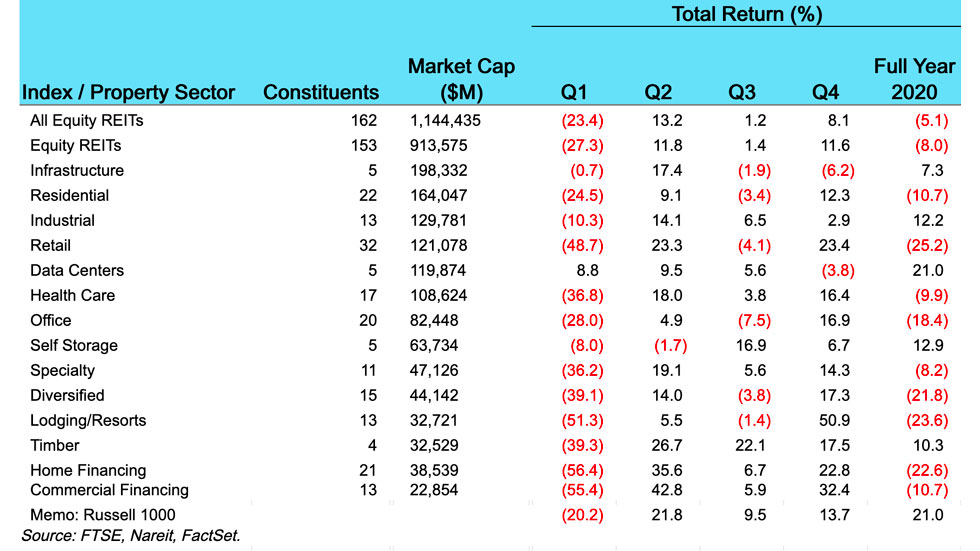 Outlook for 2021: The pandemic and the vaccines

The path of the pandemic and the vaccines will continue to hold the keys for the economy and commercial real estate, and for stock markets, in 2021. Early missteps in distribution of the vaccine, as well as further spikes in new cases and the troubling discovery of new, highly infectious strains of the coronavirus, have weighed on markets in the early days of the new year.

Most experts agree, however, that these challenges are mainly a question of timing—how quickly can a large enough share of the population be vaccinated to yield herd immunity? Whether progress accelerates and we begin to achieve herd immunity during the summertime, or whether new problems with vaccine distribution cause further delays, it appears highly likely that most parts of the U.S. economy will be mostly or fully reopened by the end of the year.

The expected future progress against the pandemic should allow people to return to the stores, to the offices, and eventually to restaurants, movie theaters, to travel and hotels as well. The demand for all types of real estate will benefit from this recovery, boosting operating performance, earnings, and stock prices. At the same time, the economy will continue to undergo a digital transformation, creating challenges and opportunities across REIT sectors.

REITs, especially those sectors with higher potential exposures to COVID-19, are likely to continue to rally in 2021, and perhaps outperform the broader market as potential risks of a longer-term impact of the pandemic on real estate fade.