Investment real estate values grew by +0.44% percent during February 2016 according to the FTSE NAREIT PureProperty® Index Series, which provides the earliest measurement of changes in the market values of properties held for investment purposes.  The South and West regions led the improvement with increases of +0.79% and +0.53% respectively, while values in the East region eased marginally at -0.13%.  Midwest region property values gained +0.27%.

Following January’s poor results, property values nationwide as measured by the PureProperty Index are now down -2.15% since the beginning of the year, and only the South region has shown higher property values over the first two months of 2016 with an average year-to-date gain of +0.66%.  Over that period property values are still below their end-of-2015 levels by -2.05% in the Midwest region, -3.64% in the East region, and -3.74% in the West region. 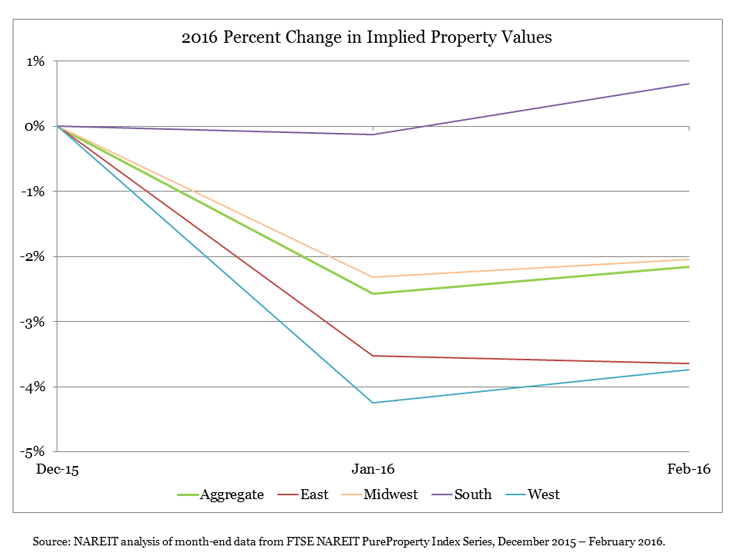 Income from property investments, however, averaged 0.25% during each of the first two months of 2016, cushioning the effect of lower property values.  Total returns averaged +0.69% during February, led again by the South region at +1.12% compared to gains of +0.71% in the West region and +0.62% in the Midwest region.  Total returns were marginally positive in the East region at +0.09%.

The PureProperty Index Series measures the implied change in market values of properties owned by equity real estate investment trusts (REITs) traded on U.S. stock exchanges by correcting for the return-amplifying effects of their capital structures on their stock prices.  The PureProperty index infers returns in different market segments using data on the property holdings of each exchange-traded equity REIT by property type and location.

Because it evaluates returns by geographic region as well as by property type, the PureProperty index series can help investors take advantage of performance differences among broad segments of the U.S. property market.  For example, during February Apartment properties in the Midwest region significantly outperformed those in the East region, with implied property values increasing by an average of +1.31% for Midwest region Apartments compared to -1.56% for East region Apartments, and total returns averaging +1.75% compared to -1.56%.

Implied market values have come down 12.12% since their peak at the end of January 2015, and remain 1.12% below their values at the end of January 2007, preceding the financial crisis of 2008-2009.  Property value indices that are based on appraisals or transactions of illiquid properties, such as the NCREIF Property Index published by the National Council of Real Estate Investment Fiduciaries or the Moody’s/RCA Commercial Property Price Index published jointly by Moody’s and Real Capital Analytics, have not yet reported any decline in property values. 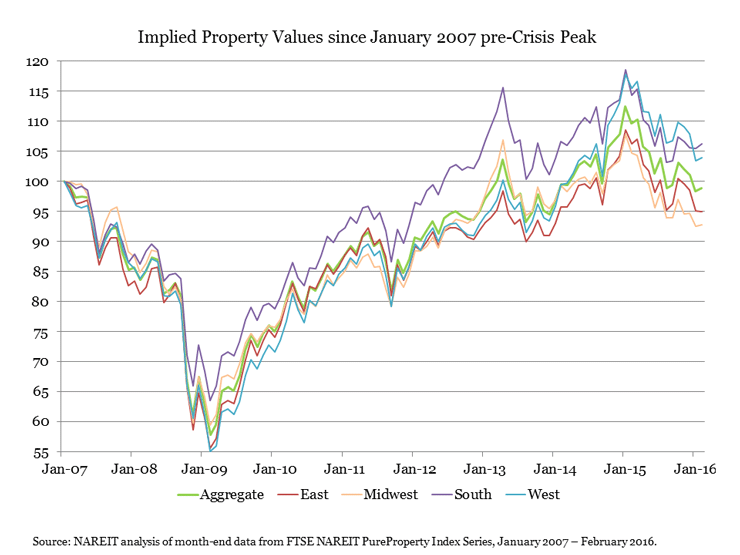