Several factors have contributed to a slowdown in economic activity in 2019. Global trade wars have hurt U.S. exports and domestic manufacturing production. Trade wars have also impacted the economies of our major trading partners, which compounds the domestic damage caused by tariffs. In addition, these effects are taking place in an economy that was already slowing from an above-trend pace in 2018 that had been boosted by the tax cuts in 2017.

There are two key questions for investors in commercial real estate. First, how likely is it that the current slowing could lead to a recession? And second, how exposed are real estate markets and REITs to deteriorating macroeconomic fundamentals?

The news is mixed on both these fronts and will bear watching carefully in the coming months. There are some reassuring signs on the macroeconomic front. Every recession in the past 70 years has occurred in an economy that showed signs of overheating. One symptom of overheating is high and rising inflation. There are no signs of rising inflation, however, and prices have been running below the Federal Reserve’s inflation target.

Another important sign of overheating is if the cyclical components of GDP are above their long-run average. These cyclical components include business capital spending on plant and equipment, as well as homebuilding, commercial construction and consumer purchases of autos and other durable goods. These long-lived assets are more vulnerable to sharp cutbacks if there is a shock to business and consumer confidence. 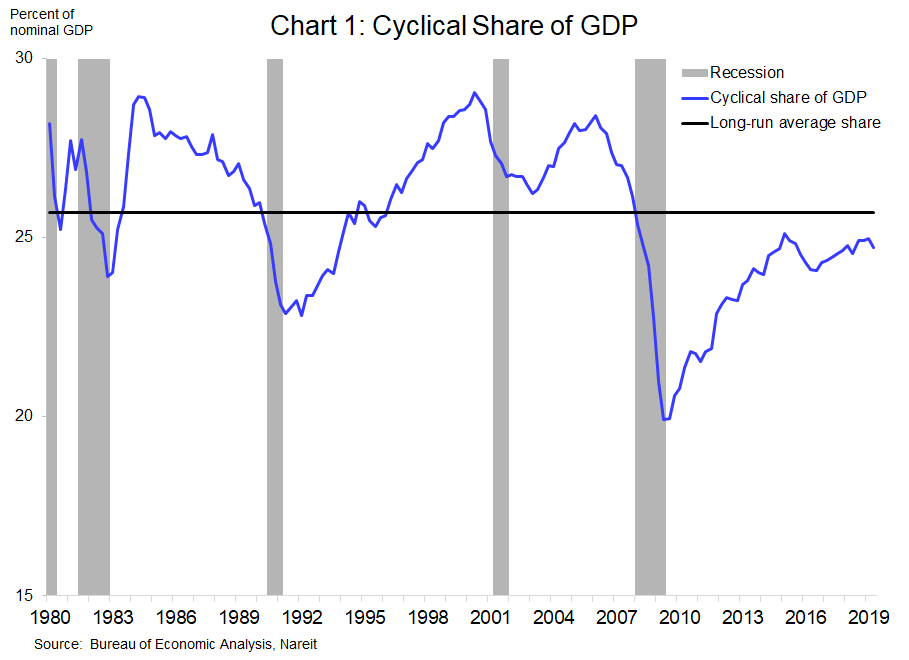 The cyclical share of GDP in the period preceding every recession in modern history was three to five percentage points above its long-run average, and steep declines in capital spending and construction drove the recession. Today, however, cyclical spending is not overheated, and in fact is a full percentage point below its long run average. This suggests that some of the risks that have caused past recessions are not elevated today (chart 1, with grey shading indicating recessions).

Commercial real estate is not immune to macroeconomic risks, but in some conditions the sector may be more exposed than others. In particular, commercial construction is one of the components of cyclical GDP discussed previously. When construction activity is high, the sector may be more vulnerable to the shock to demand that typically occurs in a recession or economic slowdown. 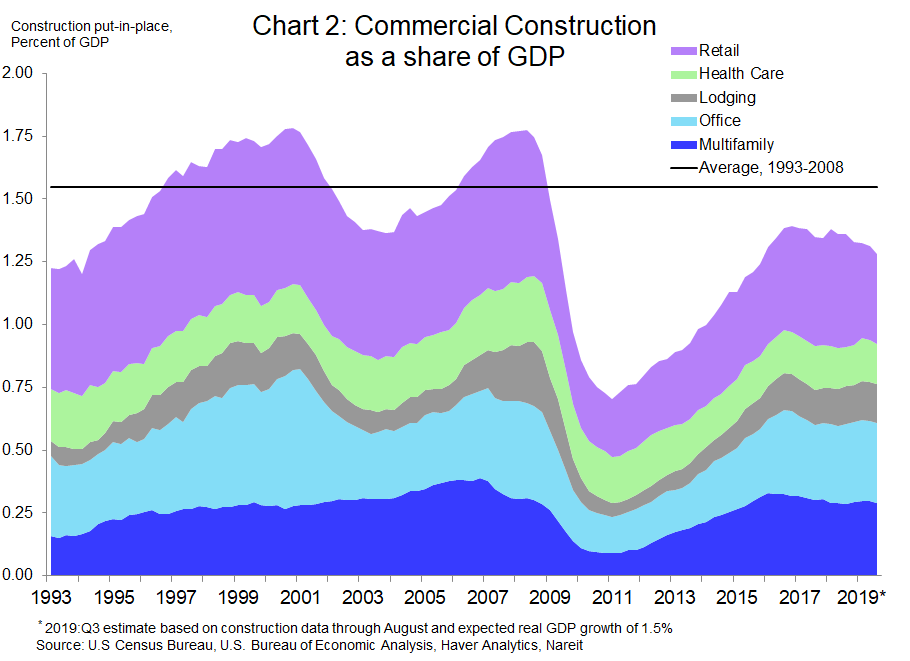 Commercial construction, however, is below its long-run average as a share of GDP, similar to the overall picture with cyclical GDP. Construction activity on a macro basis has slowed this year mostly due to a decline in construction of retail properties, reflecting the impact of E-Commerce on demand for bricks-and-mortar space.  Construction of other types of properties has grown in line with GDP and remains below its long-run average. In addition, commercial vacancy rates remain low, and new construction is in line with the growth of demand, suggesting the current exposures of CRE to macroeconomic risks are not too elevated compared to periods preceding past recessions.

The main wildcard in this outlook, of course, is that the current trade wars are unprecedented in modern history. As a result, analyses like what we present here, which are based on historical patterns, may not be a good guide to risks of recession and a commercial real estate downturn.

For more discussion of these risks, tune into a webinar on November 7th hosted by Bloomberg Intelligence on today’s uncertain economy, potential threats and their impact on REITs.