Last week I published the first in a series of commentaries summarizing “where we stand” in the market for equity real estate investment returns.  The first one focused on returns, and this one focuses on correlations.

The long-term average correlation between exchange-traded Equity REITs and non-REIT stocks has been quite low.  For example, years ago many investors used to describe REITs as “just small-cap value stocks,” but over the 26-year period since the end of 1990 (roughly corresponding to the “modern REIT era”) the correlation in monthly total returns between Equity REITs and small-cap value stocks has averaged just 72%.  Over the 12 “pre-modern” years before then that the Russell 2000 Value index was available, the long-term average correlation was appreciably higher at 78%.

Long-term average correlations have been even lower for Equity REITs with other segments of the broad stock market: just 63% with large-cap value stocks, 51% with small-cap growth stocks, 46% with large-cap growth stocks, and 58% with the broad stock market as measured by the FTSE 3000 Index.  Even the correlation between Equity REITs and their old home, the Financial sector, has averaged just 61% according to the S&P 500 Financial Sector Index.  (It’s worth noting that REITs have been included since October 2001 in indices of broad stock market returns, implying that the correlations between REITs and non-REIT stocks must have been even lower than reported here.)  For comparison, small-cap value stocks have maintained comparatively high correlations with both small-cap growth stocks (84%) and large-cap value stocks (83%) as well as the broad stock market (83%).  In short, “style box diversification” hasn’t amounted to much, whereas asset class diversification—combining REITs with non-REITs—has.

Correlations change over time, and a DCC-GARCH model (more or less the gold standard for estimating changes in correlations) suggests that the correlation in monthly total returns between exchange-traded Equity REITs and the broad stock market was 56.5% as of the end of 2016, very close to the median monthly estimated correlation over the modern REIT era.  The late-2016 surge in small-cap value stock prices, however, pushed their estimated correlation with Equity REITs all the way down to 45.6%, well below the normal range of 68%-80%.

In fact, as Graph 1 shows, the decline in correlation between exchange-traded Equity REITs and small-cap value stocks since it reached its peak value of 87% in early 2009 dwarfs the comparatively mild increase in REIT-stock correlations that occurred between the October 2001 inclusion of REITs in broad stock market indices and the advent of the 2008-09 liquidity crisis.  REIT-stock correlations most assuredly did not “spike to one” during the crisis, but they very assuredly had fallen to less than half that value as of the end of 2016. 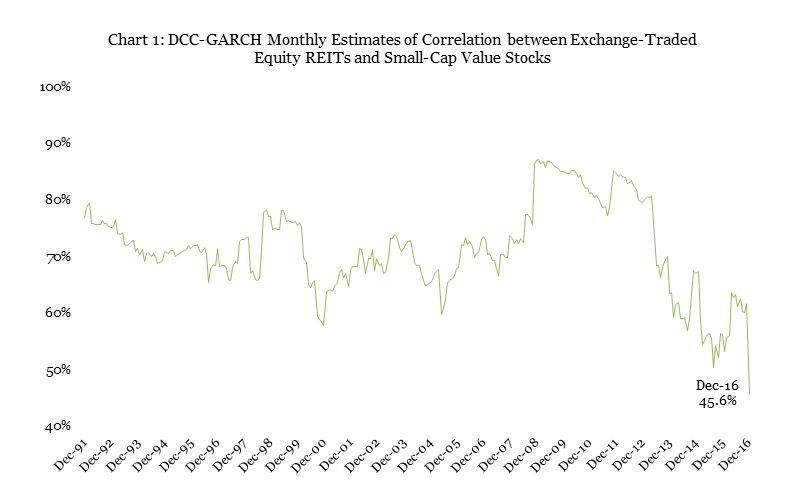 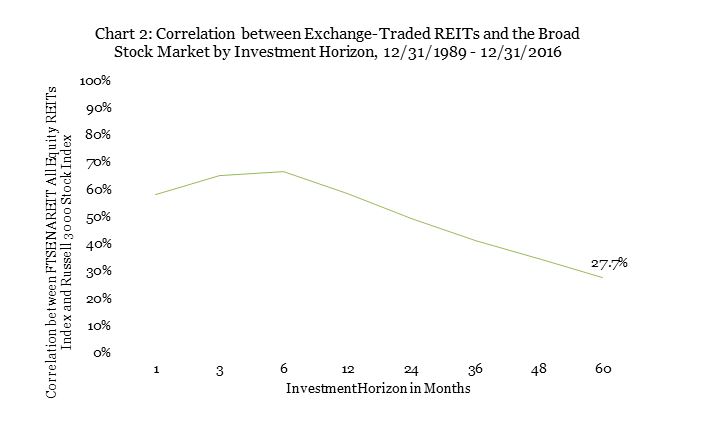 What will the future bring?  I’m the first to admit that I don’t have a crystal ball, but the big event of 2016—that would be the creation of the new Real Estate Sector under the Global Investment Classification Standard (GICS), populated almost exclusively by exchange-traded Equity REITs with a collective market capitalization close to $1 trillion—will likely, in my view, sustain a relatively low REIT-stock correlation in monthly returns going forward.  That is, the very low correlation in long-term returns may not change appreciably, but the already-lowish correlation in short-term returns may decline sharply, as they very clearly did toward the end of 2016.

In short, while the factors that drive Equity REIT returns are always somewhat different from those driving the returns of non-REIT stocks, the differences between the two equity asset classes—real estate and non-REIT stocks—have rarely been more different than they are as of the start of 2017.