REIT M&A in the Spotlight

Mergers and acquisitions involving REITs have been in the spotlight in recent months. The flurry of proposed deals announced in just the first half of this year put the market on pace to set a new record for merger activity in 2018.

There are several common themes among the proposed mergers, although the details differ from deal to deal. One of the driving forces behind the merger wave is the discount at which REIT share prices are trading compared to the value of the properties they hold. This public-private arbitrage can at times be a strong incentive for deal-making, and can also put a floor under equity market valuations. There is a large amount of private money available, which may fuel future going-private transactions. The Retail and Office property sectors often come up in such discussions, although there have been relatively few actual deals to date in these sectors.

Other deals, however, are more focused on the opportunities in strong and growing sectors of the property market. There have been recent mergers in the Industrial and Data Center sectors, for example, with potentially more on the horizon. These sectors have been strong performers, driven by rising demand for warehouse and distribution facilities to ship the goods bought on the Internet, as well as the tremendous growth in “cloud” data transmission and storage. Combinations in these areas are motivated by the possibilities of continued robust growth and the desire to build a stronger platform for the future.

While the mergers have attracted much of the attention in recent months, one should not overlook acquisitions—the “A” in “M&A”. After all, acquisitions are a much more significant channel for REIT asset growth than mergers. Since 2011, REITs have made gross acquisitions of over $540 billion; REITs also sold some $250 billion of properties over this period, resulting in net acquisitions of nearly $300 billion. 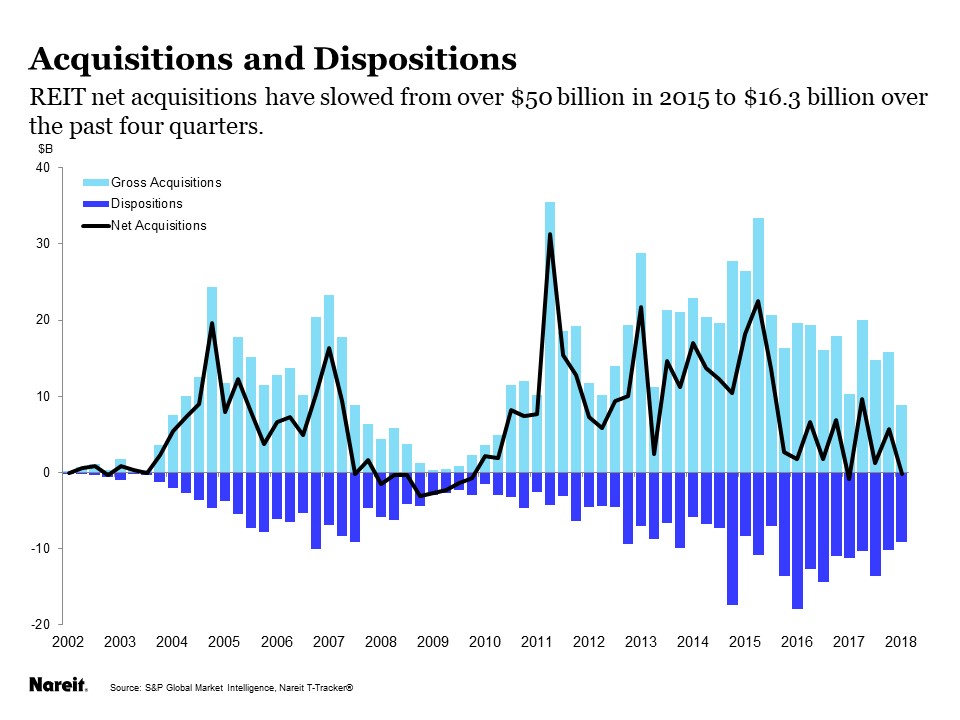 Acquisition activity has slowed notably since peaking at $57 billion in 2015 (chart above, with quarterly acquisitions and dispositions; the $57 billion refers to the sum of all four quarters in 2015). The underperformance of REIT share prices has diminished or eliminated the share price premium to NAV for many REITs, raising their cost of capital and reducing the attractiveness of asset purchases. The impact across property sectors has been varied, however, as some sectors are trading at discounts to NAV while share prices in other sectors remain at a premium. Office and Retail REITs have sold properties, on net, over the past four quarters, while Health Care and Data Center REITs have continued with positive acquisitions. Despite the higher cost of capital, the REIT industry overall chalked up $16.3 billion of net acquisitions over the past four quarters. 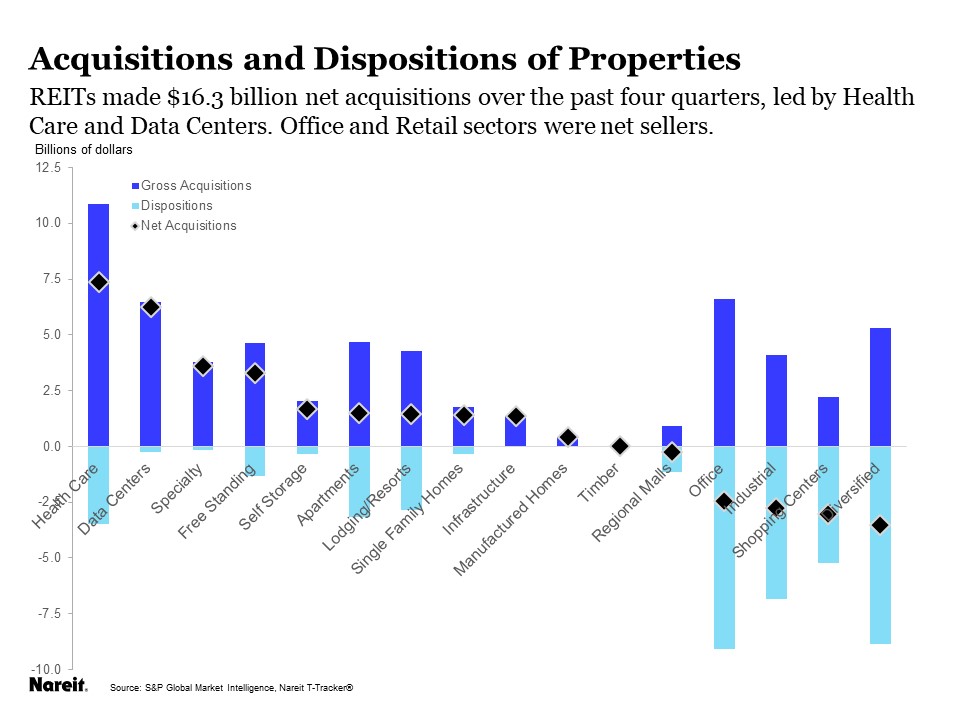 Nareit is teaming up with Bloomberg for a webinar on July 11 covering REIT M&A trends and the outlook for what may be coming next.