The FTSE Nareit All Equity REITs Total Return Index moved back above its pre-pandemic high for the first time on April 26, as successful efforts to control the pandemic and policies to stimulate the economy are boosting prospects for commercial real estate markets. The REITs’ stock market path through the recovery to date can be usefully described as three distinct periods: 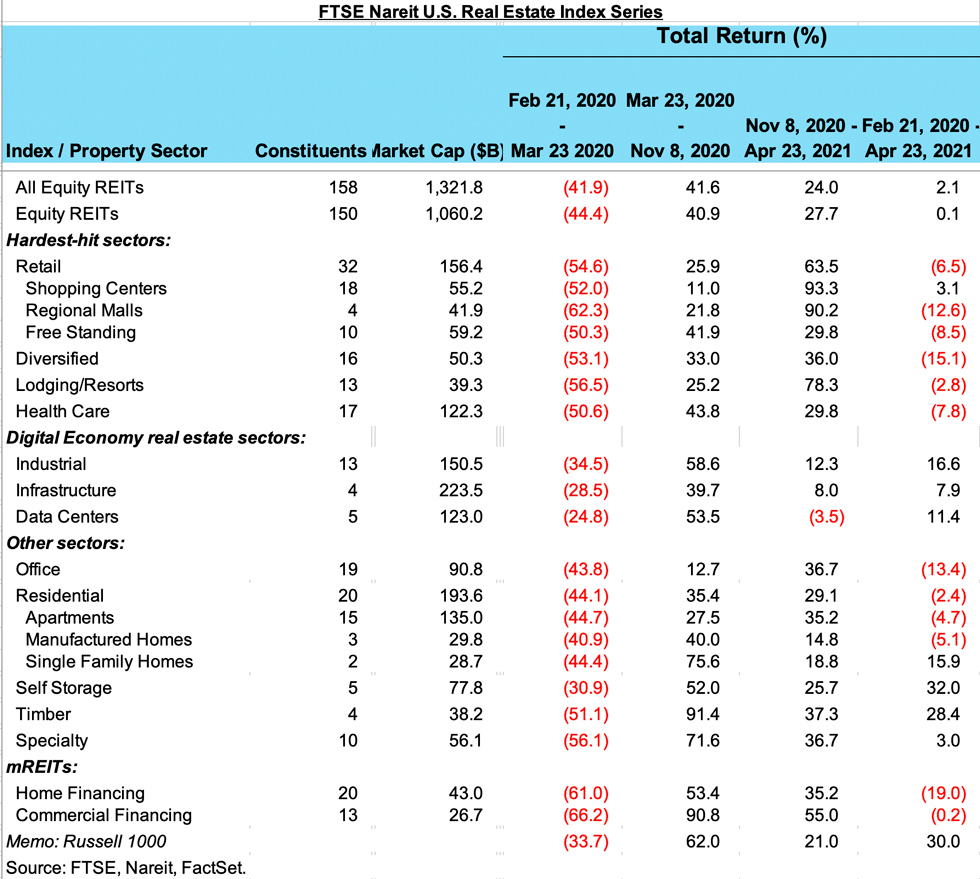 REIT property sectors had very different performance during each of these time periods. One group of property types was directly impacted by the social distancing measures, and experienced larger stock market declines during the initial phase. This group includes lodging/resort REITs, retail REITs, as well as health care REITs and diversified REITs. The rebound in stock returns among this group generally lagged other sectors during the stabilization period between late March and early November, but this group has had the strongest rally since the news of the vaccine results. Despite the recent recovery, however, these sectors remain about 8% below pre-pandemic levels of the total return index (chart below, dark blue bars). 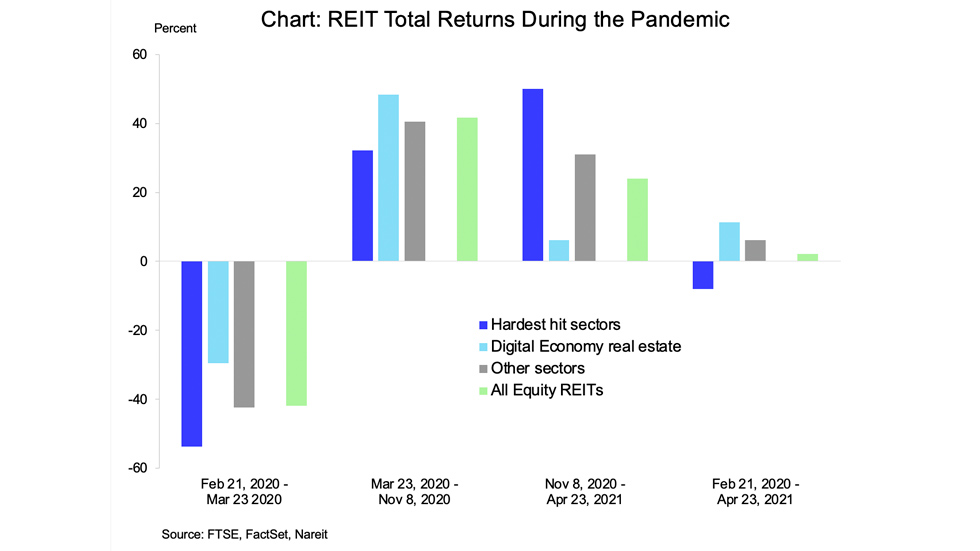 The REIT property sectors that support the digital economy have enjoyed strong demand during the pandemic, and robust stock market performance as well. Share prices of the data center REITs, infrastructure REITs, and industrial REITs did decline during the initial downdraft, but by somewhat less than other property types (light blue bars). Digital economy sectors posted the strongest returns during the second phase, as the shift to an electronic economy got underway. Digital economy REITs had a total return of roughly 50% (a market-cap weighted average of the sector returns) between late March and early November. This sector has given back some of the prior gains, however, as vaccinations have progressed.

The remaining property types have had an intermediate, and somewhat mixed, performance, with large declines in the first month of the pandemic followed by gains during both the stabilization and post-vaccine periods (grey bars). Some sectors in this category like office and residential remain below pre-pandemic highs, while self storage and timber have risen well above their earlier peaks.

Going forward, there are still concerns about possible longer-term impacts of the pandemic on some of these commercial property sectors. Most of the discussion focuses on the office market, specifically, how much WFH may trim demand for office space in the future. Recent reports, however, of some major employers planning a return to the office in the months ahead (albeit with a more flexible environment that allows some working from home to continue even after employees have returned to the office on other days) raise the possibility that the longer-term demand for office space will be less affected than many previously believed. Developments like these may fuel a further recovery in REIT share prices.