REITs and Real Estate Get a Second Wind

The macroeconomic picture took a turn for the worse last winter. Global concerns prompted a sell-off in equity markets, while GDP growth disappointed in the first quarter and job growth showed signs of faltering. Trends in real estate markets added to these worries. New construction, which has been ramping up steadily since 2011, raised the risk of new supply saturating the market. Property prices stalled mid-winter, and prospects of higher interest rates posed growing headwinds for the sector.

These developments led to the perception that the real estate cycle was in its late stages, with many media reports warning that the market was in danger of topping out. To paraphrase Mark Twain, though, rumors of an impending real estate downturn have been greatly exaggerated. We expect the real estate recovery to continue for the medium term.

What’s responsible for this more favorable outlook? Many economic indicators have shown improvement in recent months. A solid jobs report for June provided reassurance that the economy’s legs were still solid. Consumer spending has been robust, and industrial production is solid. Perhaps most important, the Federal Reserve has signaled that they are in no hurry to raise interest rates.

Taken together, these developments give us more confidence in the outlook for real estate. Recent news supports our view that the sector has a second wind, as real estate fundamentals showed steady improvement in the spring:

Vacancy rates continued declining in 2016:Q2. In the office, retail and industrial sectors, vacancy rates have fallen 50 bps or so over the past four quarters to pre-crisis levels. Apartment vacancies, which had moved up a bit last year due to increasing supply and some normal seasonal weakness, edged down 10 bps in the second quarter. At roughly 4 percent, though, there is little or no excess vacancy in the apartment markets. 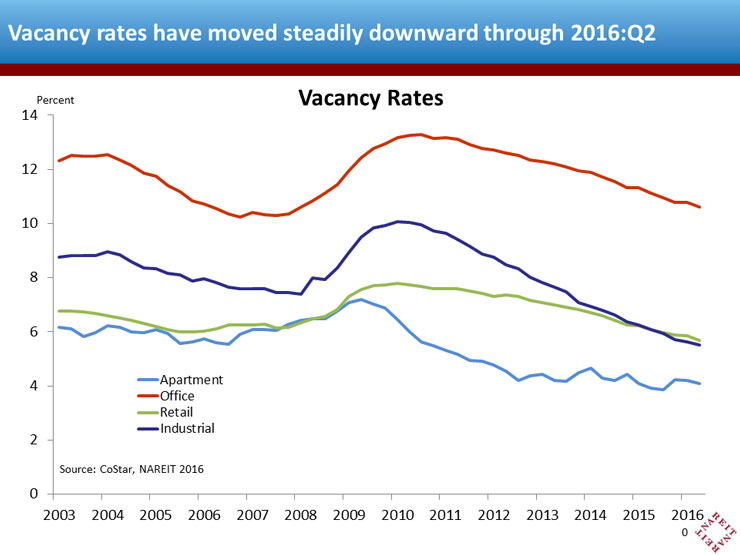 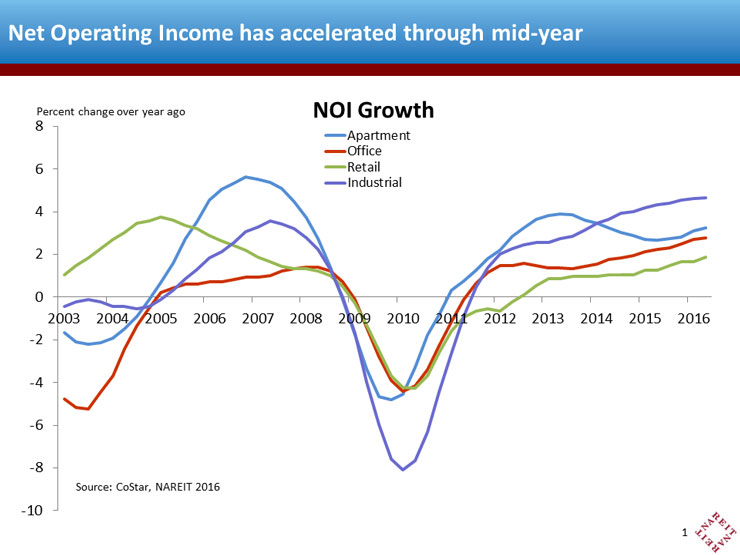 Net absorption is still running far ahead of completions. Net absorption over the past four quarters was 60 percent above completions in the office and retail property markets, and 33 percent above completions of industrial space. It’s important to keep an eye on rising construction, but at current trends these markets are set to continue to firm throughout this year and next. This will likely cause further declines in vacancy rates, supporting rent growth and property valuations. 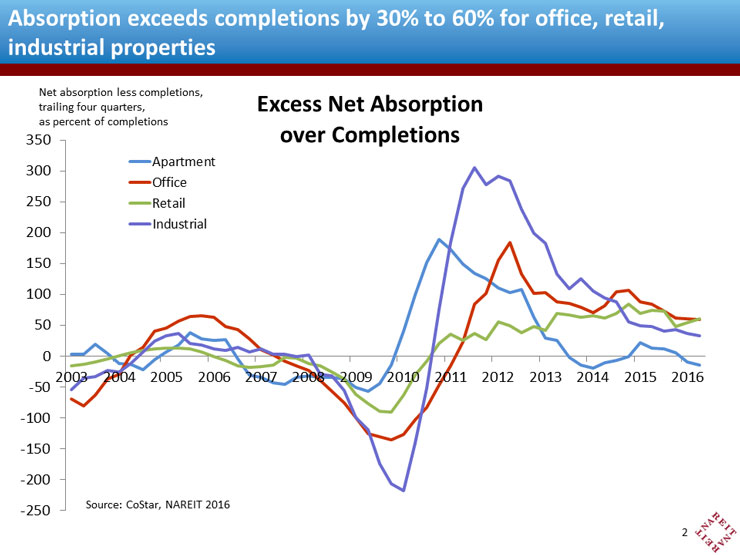 Net absorption in apartment markets fell slightly short of supply, due to a bulge in projects that were completed recently.  There’s a large pent-up demand for apartments, however, due to young adults and others who doubled up with roommates or parents during the financial crisis; this pent-up demand continues to be a wind at the back of the apartment sector. Rent growth slowed a bit to just under 3 percent over the past year, from the 6 to 7 percent pace a year ago.

Property prices turned back up in the spring. The mid-winter pause in the market was rather short lived. Prices edged down from December through February, but have since recovered the lost ground. Nationwide, prices of all properties are up 7 percent over year ago. 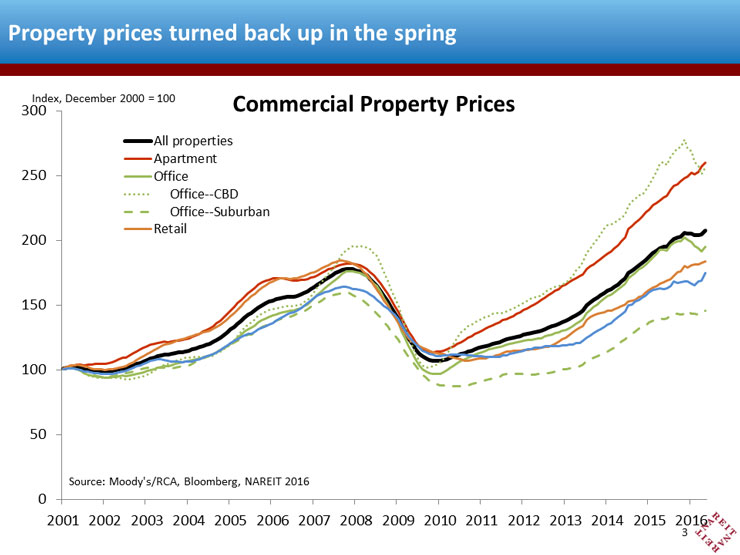 In sum, demand continues to exceed supply in real estate markets, leading to lower vacancies, rising rents and accelerating NOI. There are few signs of any meaningful slowdown ahead.