The novel coronavirus that causes COVID-19 was able to spread rapidly across the globe in large part because it was a new disease that humans had never faced before. The economic consequences of the pandemic had an eerie echo in the novel challenges never before experienced in a modern economy, as large sections of the country shut down to prevent the spread of a disease for the first time since the influenza pandemic of 1918.

Brick-and-mortar retail has been impacted by the pandemic, of course, but its struggles have been compounded by a familiar foe: the competition against e-commerce sales. Recent data show, however, that brick-and-mortar retail is demonstrating a surprising degree of resistance to this threat.

Before evaluating where this sector stands today, let’s look back on the friction and hurdles of the past decade. E-commerce has been capturing a rising share of total retail sales since 2010, as online sales doubled as a percentage of total sales excluding restaurants, motor vehicles and gasoline sales, from 9.6% in 2009 to 19.6% in 2019. The e-commerce share jumped at the start of the pandemic to 25.5% in April 2020, nearly 6 percentage points above its recent trend, as online sales surged and shoppers avoided going to stores.

This sharp rise in online sales fueled fears of a rapid decline in brick-and-mortar retail. Indeed, a spate of bankruptcies and store closures by major retail chains demonstrated the potency of the threat.

But brick-and-mortar retail is bouncing back. The e-commerce share has retreated over the past ten months, slipping back to 21.3% in December 2020 (the Commerce Bureau recently released figures through February 2021, which showed a slight uptick to 22.7%). The e-commerce share is currently 2.0 percentage points above its trend since 2014—which, at the trend rate of 1.25 percentage points per year, represents about 18 months of growth. Rather than being the end of brick-and-mortar retail, the pandemic appears to have pulled forward the growth of online sales and store closures that might otherwise have occurred over the next year or two. 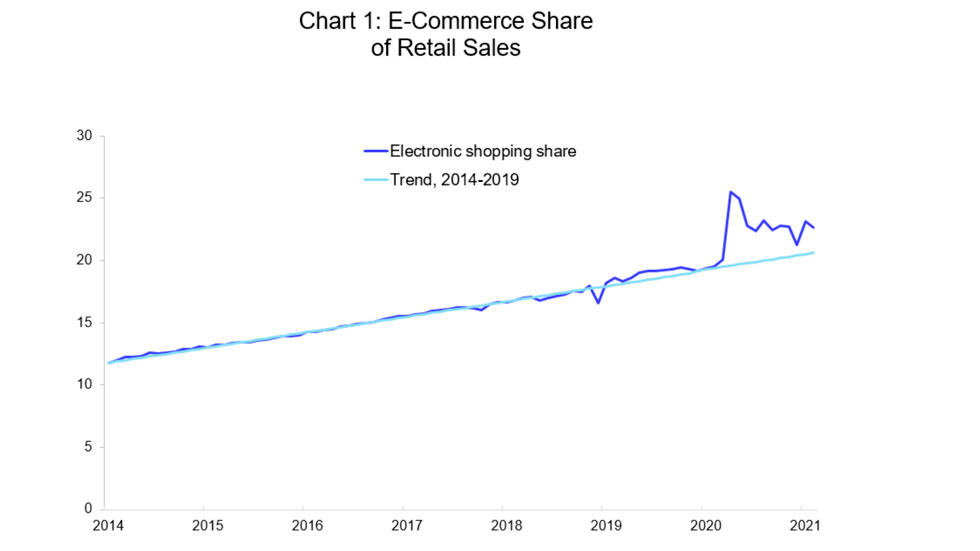 Sales through brick-and-mortar locations are likely to rebound later this year and next, as the spread of vaccines makes it safe to spend more time in shops and malls again. An informal survey of social media posts shows that, in addition to visits with family and friends or holiday get-aways, the chance to go shopping in person is high on many peoples’ wish lists.

Somewhat surprisingly, in-store sales have been more resilient over the past five years than the rising trend line of the e-commerce share would suggest. E-commerce sales have been taking a larger slice of a growing pie, but brick-and-mortar sales have continued to rise as well.

For example, brick-and-mortar sales grew at an annualized 3.0% rate since 2016, and rose a more robust 6.5% over the past 12 months. While this is well behind the 15.4% annualized growth of e-commerce sales since 2016, it is still above the rate of inflation.

There is still uncertainty about the outlook, of course. The government figures on e-commerce sales may not classify correctly everything that is bought and delivered through online channels. This mismeasurement could underreport online sales through major retailers that do not break out all their internet purchases, but could also miss the growing significance of fulfillment centers. In large part this measurement challenge is because most major retailers have adopted an omnichannel approach that integrates online sales and store locations for comparison shopping, purchases and returns. To the extent this reporting misses some online sales, however, the more important reality is that in-store and online sales channels are closely linked. This sales strategy will continue to generate demand for physical store locations.

A version of this article originally appeared on Forbes.com.