The senior housing business is in the midst of a building boom the likes of which we have not seen for a couple of decades. The current construction pipeline is 6.1 percent of the existing stock, according to the National Investment Center for Seniors Housing and Care (NIC), and the wave of new facilities coming on line has raised concerns about the sector’s fundamentals in the quarters and years ahead. Indeed, the new supply has already had some impact on the market, as the occupancy rate of senior housing properties was 88.8 percent in the third quarter. Although this is unchanged from the prior quarter, it is 1.4 percentage points below the cyclical high of 90.2 percent reached in 2014. (More information from the NIC is available here). 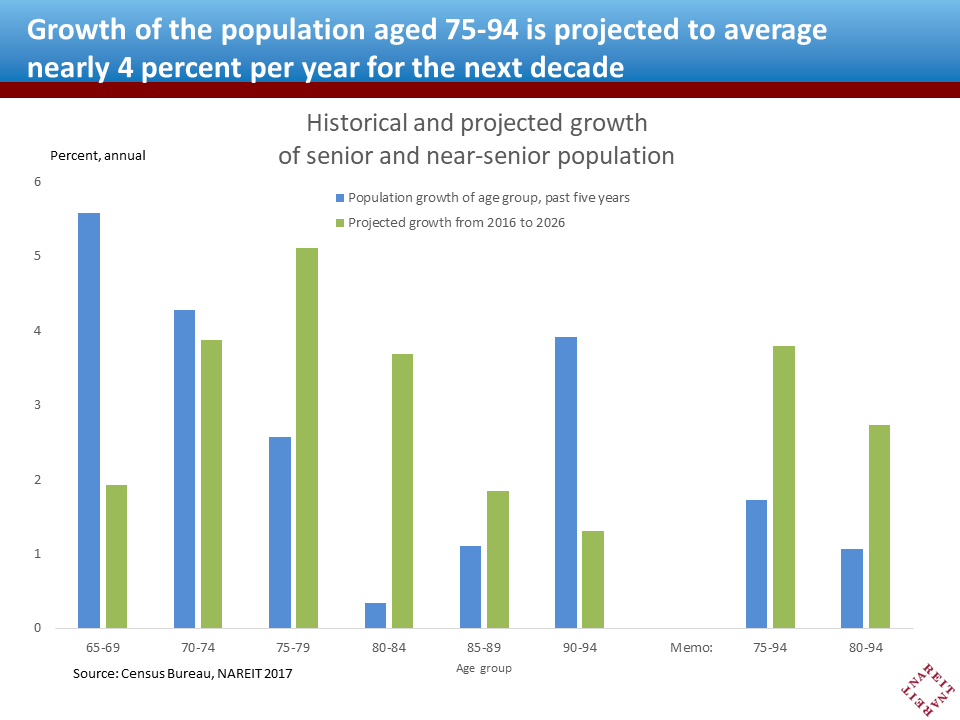 There’s some simple math behind these supply concerns that compares growth of the stock of senior housing to growth of the 80- to 94-year population, the age group most commonly associated with senior living. The inventory of senior housing properties has been increasing at 4 percent per year, but the population aged 80-94 is only rising at a 1.1 percent rate (blue bar, right side, in chart). That seems to spell trouble.

But there seems to be something wrong with this simple math, for it would imply occupancy rates would be dropping nearly three percentage points per year, as this is the margin between the growth of supply and the growth of the 80+ age population. In fact, however, occupancy rates slipped just 1.4 percentage points over three years. What can explain this discrepancy?

The answer can be found in the choices that older Americans are making about where to live, which have been undergoing a major transformation over the past two to three decades. Facilitating these changes has been the rise of modern retirement communities like those owned and operated by Health Care REITs. These communities offer a much wider range of amenities and services than did the choices available a generation or two ago, when most of those living in a senior facility did so because of medical and nursing needs. Now, however, with the growth of both independent living and assisted living facilities, these developments truly are communities, and many have vibrant social scenes and activities. Not only are more and more older Americans living in retirement communities than ever before, they are also moving in at younger ages. (See our analysis of changes in demographics driving the senior housing sector, Demographic and Financial Determinants of Housing Choice in Retirement and the Rise of Senior Living, Calvin Schnure and Shruthi Venkatesh, 2015).

The influx of younger seniors into retirement living is bolstering demand beyond what the 80+ population alone would provide. While the population aged 80-94 has been growing at just over one percent, the population aged 75 to 79 years has been increasing at more than 2½ percent per year, and the 70 to 74 age group has been increasing faster than 4 percent. Net absorption in senior housing in the third quarter was 3.2 percent of the existing stock (annual rate), which tied the previous quarter for the fastest pace since the NIC began gathering data in 2006—and likely benefitted from demand from these younger seniors. Rents increased in the third quarter at a 2.7 percent annual rate. This is a deceleration from recent quarters, but continued rent growth above the rate of inflation indicates that the growing demand, including from younger seniors, is indeed supporting the market during the construction boom.

The rapid growth of the modern retirement community today comes just as the leading edge of the Baby Boom generation is beginning to retire. While most Boomers may be years away from selling the family homestead, the population age 75 and over is projected to grow more than twice as fast over the decade to come as it has over the past five years (green bars in chart).  Many of these households may choose to live in a retirement community, including those operated by the Health Care REITs, in the not-too-distant future. The senior housing sector may be facing a wave of new supply, but there is plenty of demand not too far over the horizon, too.